Tesla Model S Soon To Exceed Nissan LEAF Sales In The U.S., But Can It Hold On? 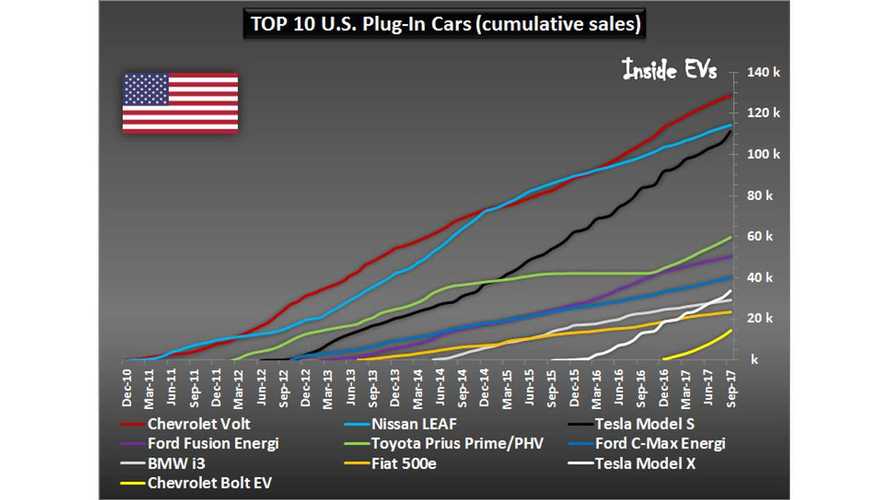 Despite the fact that Tesla began sales of Model S in U.S. some 2.5 years after the Nissan LEAF, the cumulative deliveries between the two EVs are nearly equal today.

And now the battle for the "best selling all-electric car" in America is on!

Though September, Nissan has sold 114,337 LEAFs in the US, while Tesla has delivered an estimated 111,242 Model S sedans.

The difference of slightly over 3,000 units is expected to disappear by the end of the year (as the current LEAF is just now running out of inventory); just in time to reach parity ahead of the 2018 Nissan LEAF's introduction in January.

Of note:  Our cumulative sales Top 10 chart (above) also welcomes a new all-electric model in the 10 spot this month - the Chevrolet Bolt EV, which has quickly reached the 15,000 delivery mark.

Once January arrives, and new LEAF sales are underway, it is an open question who will prevail going forward.

The Nissan LEAF on the other hand...not so easy to predict sales. The original LEAF still holds the record for the most plug-in sales in a calendar year for the US (30,200), so Nissan has also shown the ability to move EVs.

Adding to the sales uncertainty, the 2018 LEAF is improved in almost every way, including a significant range bump from 107 miles to 150 miles (EPA), while at the same time the price has come down some $700.  So, Nissan LEAF sales will definitely being heading upwards in a hurry in 2018.  Nissan itself said it was conservatively expecting sales to double or triple.

Either way, the winner is the greater electric vehicle community, as plug-in sales look to soar in 2018...especially when adding in the Tesla Model 3;  a vehicle that (at least in theory) could be taking down both the Model S and LEAF as overall sales champ before next year closes.