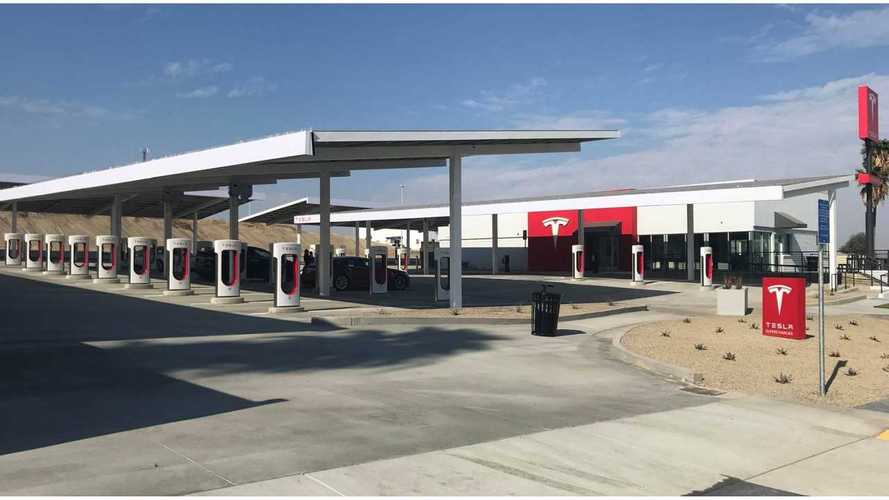 Gonna put an old school drive-in, roller skates & rock restaurant at one of the new Tesla Supercharger locations in LA

It was really only a matter of time before the realization that food delivery and entertainment will be big business at Tesla Supercharger stations.

Or ... perhaps Tesla CEO Elon Musk read Alex Roy's recent review in The Drive (which was the follow-up to the record-breaking electric-car Cannonball run with InsideEVs contributor, Dan Zorrilla). However, we can't imagine that someone at Tesla hasn't been contemplating this for awhile. We've already reported that these new "Mega" Supercharger stations are already quite stocked. Roy wrote:

"Tesla's Supercharger Network remains the best of breed, but charging speeds still have a ways to go in order to find parity with fossil fuel refilling.

You know what else has a way to go? Facilities at Superchargers, most of which are located near budget hotels and fast-food restaurants. Night-time charging is lonely, and bathroom visits in the winter mean a chilly walk or ducking behind the transformers.

Tesla surely wouldn't want to let any other outlets take advantage of such a great idea. So, Musk is willing to promise the implementation of an old-fashioned drive-in, complete with roller skating waitstaff, rock music (David Bowie?), and a big screen playing a montage of the best movie clips of all time. We can only imagine scenes from Monty Python, Space Balls, and The Martian.

Of course. And an outdoor screen that plays a highlight reel of the best scenes in movie history.

Hopefully, this concept will trickle into other stations over time and become another big, unique business venture for Tesla. Maybe they can cook locally-sourced, gourmet,  food using solar power. Other suggestions include craft beer (which could prove to be a very bad idea), re-engineered calorie-free food, a vegan menu ... and, of course, the list goes on and on.

No paper or printing will be wasted on menus since Musk says the menu will just pop on on the vehicles' touch screen.

Good idea. We can just have the menu pop up as soon as you put the car into park.

A little girl named Sydney has attempted to save the busy CEO a bit of time by drawing up the plans for him!

My daughter Sydney loved this idea so much she made a drawing of the design as a suggestion :) pic.twitter.com/e2MQbSAWZb