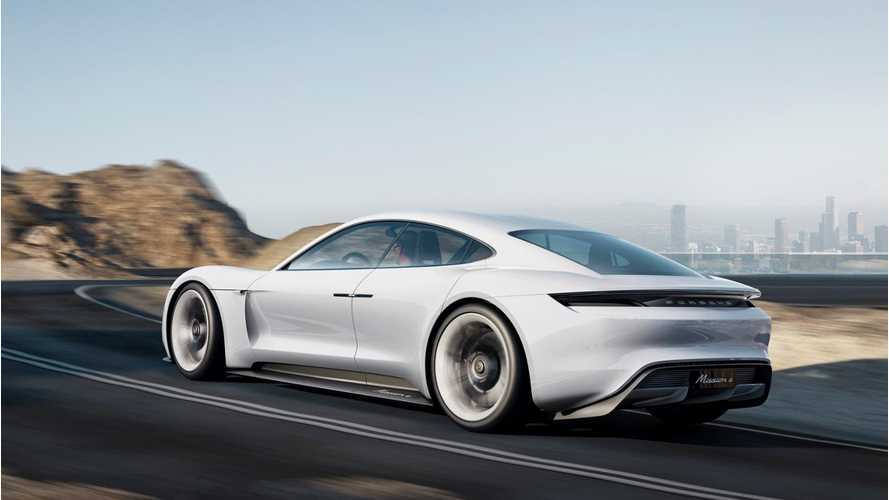 Prototype Porsche Mission E out testing with Teslas ... despite looking like a Panamera (via Automedia)

Here's what two top Porsche executives have to say about the Mission E, electrification of other models, future challenges, Formula E, and business in general.

Autoblog caught up with Porsche's Michael Steiner and Klaus Zellmer at the recent Frankfurt Motor Show. Steiner is a board member for Research and Development and Zellmer is President of Porsche Cars North America. The talk was regarding the automaker's future strategy surrounding electrification and other related topics.

First of all, the Mission E. The publication says Porsche still has a long way to go with its all-electric Tesla competitor (as we've seen from recent testing photos) but progress is forward and positive. It also seems as though the automotive world is beyond excited over the prospects of a four-door pure-electric Porsche to rival Tesla on almost every aspect, including price.

Let's clear up one piece of information early on. The Mission E will be marketed as a product line, not just a singular vehicle. So, rather than the automaker electrifying current models -- much like some legacy automakers are setting up to do -- Porsche will release the Mission E with the intention of bringing new vehicles to market under its name. Dr. Steiner shared:

Of course, this answers another frequently asked question. Will we see an electrified 911 at some point? Based on the above information, the obvious answer is "no". However, this isn't to say that there won't someday be a Mission E variant along similar lines.

Electrifying the 911 just doesn't really make sense to Porsche at this point. Steiner said weight is just too much of a factor for a small, agile vehicle like the 911, and right now these type of powertrains make more sense for vehicles where "power-to-weight ratio isn't as critical", like the Cayenne and Panamera. In essence, in the future, there will likely be enough advance in battery tech that an electric 911 could make sense, but it's not on the automaker's current radar.

Zellmer believes that the Mission E's "mission" is twofold. It can both attract Porsche owners to the electric configuration, as well as bring new customers to the Porsche brand. He believes that this is contingent upon the automaker getting it to market before the end of the decade. Zellmer is aware that being late could mean the Mission E would fail with what it's set out to achieve. He also pointed out that many Porsche owners are the type of people that own several cars, and the Mission E could simply fit into their "fleet". He told Autoblog:

"The average Porsche customer owns more than three cars, so adding another one to the car fleet, so to speak, is an option for us too in terms of potential."

In order for the automaker to assure success, there's a lot that needs to happen sooner rather than later. Zellmer mentioned preparing dealers to sell and service the vehicles and getting charging infrastructure in place at dealerships ahead of time. This is not only for dealers to charge the cars but also for customer use. Not to mention a separate, nationwide charging network. He said:

"With battery technology, there are certain things you have to take into consideration when you work on those cars, or when you store the batteries or exchange them."

"We have to work on our charging infrastructure the nation, so that range anxiety — despite the fact that we have a bigger range than 300 miles — is not a barrier."

Porsche will use Formula E to showcase its success with electrification.

Steiner elaborated on the charging situation, mentioning building charging infrastructure in the U.S. ("Electrify America") and in Europe, specifically on the Autobahn. He said the automaker needs to focus fast charging where it's needed. Even once cars can achieve some 450-600 miles of range, there will still come a time when they need to be charged on the road, and it needs to be fast. Steiner explained:

"There is no need for super fast charging at home, because you have time overnight ... For long-distance driving, we think the breakthrough will come with really short recharging time."

In terms of home charging, Zellmer said that the automaker will have set plans for educating consumers. This could mean having a Porsche charging consultant come to the owner's home and talk about what equipment is needed, how to get it properly installed, and how to use it correctly. Porsche is known for its customer service and it's important that during this transition, the buyers see a seamless process from start to finish, complete with any necessary support.

Porsche aims to use Formula E as a significant way to bring global attention to the brand's electrification. Making racing fans aware of the automaker's successes with the technology is a huge leap in the right direction. Steiner shared:

"The only competitive series we were able to find is Formula E, and during several discussions we had with Agag and his people, we got the impression that the technical freedom we will have year by year in Formula E will give us some additional freedom to prove our technology in racing."

"Besides being downtown, seems also to attract different people. There are more families, more younger people seen at Formula E races than we see at conventional, traditional racing."

In the end, Zellmer considers the Mission E the automaker's biggest future milestone. He said:

"In terms of milestones in the future of ­– from my point of view ­– of the battery electric vehicle, Mission E is the biggest one."

He added that just like Porsche's other models stand clearly above rivals' offerings, the Mission E will follow suit. Zellmer concluded:

"I think you're going to truly feel the Porsche-ness in that car ... it's got a different soul. So, that Porsche soul is something that we need to provide with the Mission E. And we are going to do so."