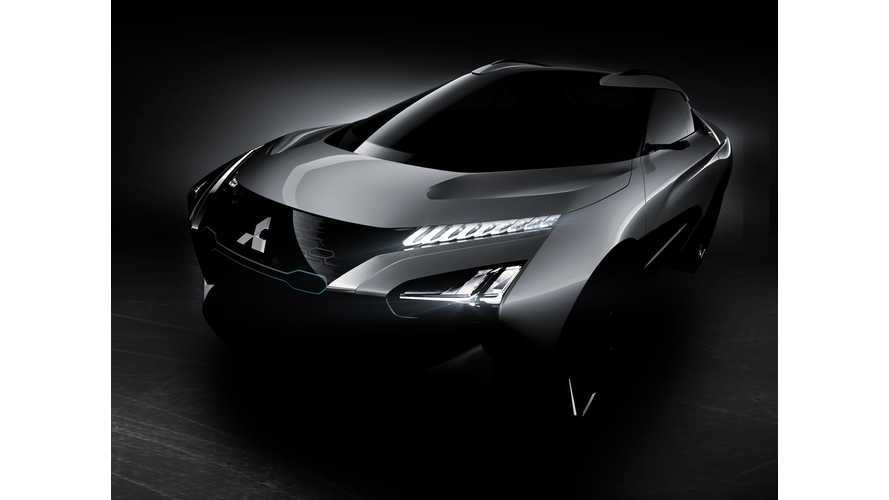 The Mitsubishi e-EVOLUTION Concept which has been announced for the 45th Tokyo Motor Show, turns out to not be a plug-in hybrid after all, but rather it's an all-electric SUV with a AI Personal Assistant.

Mitsubishi has revealed two more images of the coming show car, and says that the concept indicates a direction Mitsubishi Motors can take in the near future....although we tend to not believe them (more on that later).

The power-train consists of three electric motors for all-wheel drive.

The front axle is equipped with a single motor, while the rear wheels are driven by two motors using the company's new Dual Motor Active Yaw Control (AYC) system.

Despite the e-EVOLUTION looking pretty great, we have to wonder if this isn't a holdover from the "old Mitsubishi"; the company that wasn't owned and controlled by Nissan.

It was just under a year ago the Nissan picked up a 34% (and controlling interest stake) in Mitsubishi. Since then, it has been announced future PHEV-tech will mostly come from Mitsu, while common parts (motors, batteries, shared platforms etc) for all-electric offerings will come from the Alliance (which includes Renault as well) as a group, to be shared among the partners.  We aren't sure how this car, likely conceived long before the company's acquisition could possibly fit into future plans.

There where no further technical details that we could share at this time, but thye company some of the AI Personal Assistant features:

"Mitsubishi Motors onboard AI Personal Assistant builds up a comprehensive understanding of the vehicle's occupants and delivers a connected motoring experience by providing the right kind of information to make driving safer and less stressful, and by supporting communications between the driver and their family at home."

MITSUBISHI e-EVOLUTION CONCEPT will be one of 12 Mitsubishi models on display. It will be joined by the new Eclipse Cross coupe SUV (Japan market model), unveiled in Japan for the first time, and scheduled for its Japan launch early next year. The Outlander PHEV and other leading MMC models sold in Japan will also be part of the lineup.

Technical Exhibitions
AI Personal Assistant
Mitsubishi Motors onboard AI Personal Assistant builds up a comprehensive understanding of the vehicle's occupants and delivers a connected motoring experience by providing the right kind of information to make driving safer and less stressful, and by supporting communications between the driver and their family at home.
Here are AI Personal Assistant's main features:
1) Dialogue System
AI Personal Assistant uses the latest in AI technology including voice recognition and natural-language processing, to correctly understand what occupants are saying, and to converse with them in natural-sounding language, even amid all the road noise. Voiceprint technology and person recognition allow the system to identify individual passengers, learn about them from their speech and behavior, and to provide services that best match tastes and needs.
*2…Developed jointly by CAPIO Inc. and ichibel co, ltd.
2) Connectivity with Different Devices and Content
Smart Speaker Demonstration
At MITSUBISHI CONNECT area, there will be a demonstration using Amazon Echo with Alexa and Google Assistant on Google Home VPA-enabled wireless speakers (also known as smart speakers) to show the potential for linking home to car. This is one of the connected car services the company is developing.
Amazon Echo with Alexa use voice commands to play music, access schedules, do online shopping and control smart electrical appliances.
Google Home has the Google Assistant built in and uses voice commands to play music, access schedules and control smart electrical appliances.
The use of smart speakers is growing, particularly in the U.S.
The demonstration will show how assistants on smart speakers can be used to connect with cars and control the headlamps, adjust the interior temperature and lock or unlock the doors. Visitors to the show will be able to try them out for themselves.