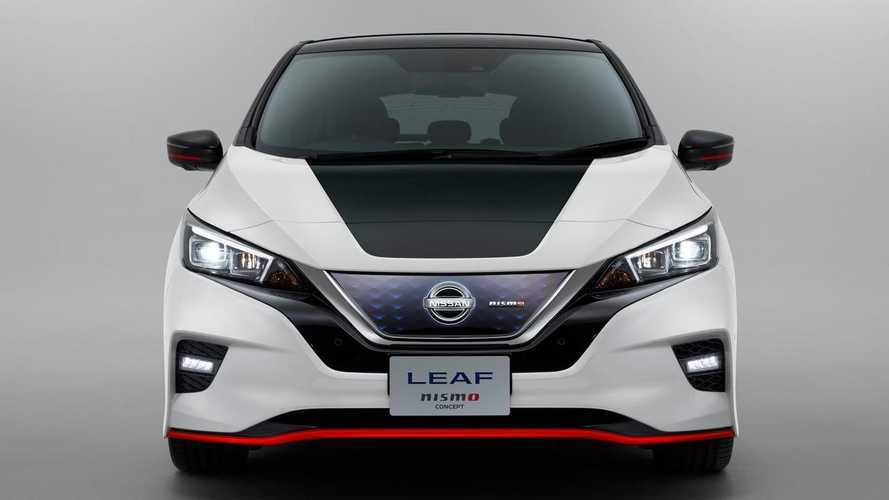 Promises to deliver "instant acceleration at all speeds."

Following yesterday’s sneak preview, Nissan has published a complete set of images with Nismo’s take on the second-generation Leaf.

The regular variant of the 2018 LEAF (full details here) is not what you would call an exhilarating car by any means (it's not meant to be, according to Nissan), but Nismo is attempting to give the zero-emissions hatchback some mojo by installing a sporty body kit featuring the firm’s signature red accents.

Changes on the Nismo LEAF include a beefier front bumper with a spoiler lip as well as bigger mesh pieces of trim hosting horizontal LED lights replacing the trapezoidal clusters of the standard 2018 Leaf.

The side profile shows Nismo-branded alloy wheels with high-performance tires and a slightly lowered ride height as a result of implementing a stiffer suspension setup.

At the back, a somewhat more aggressive diffuser has the fog light mounted in the center in the same vein as F1 cars have a rain light. The compulsory “Nismo” badge adorns the hatch.

There’s not much to say about the interior as the only changes that have been made are the red accents noticeable around the air vents and also for the seat upholstery. The same theme has been applied onto the door panels and the start button mounted on the center console where the “Nismo” logo serves as a reminder it’s not a run-of-the-mill Leaf.

Beyond the styling tweaks, the concept aims to provide “instant acceleration at all speeds” thanks to what Nissan describes as being a “custom-tuned computer.” We will find out what that actually means on October 25 when the Leaf Nismo will premiere at the Tokyo Motor Show where there’s also going to be a Serena Nismo sporty minivan on display.

It is believed Nissan will also unveil a Leaf-based SUV due to go on sale in 2019, but the report has yet to be confirmed.