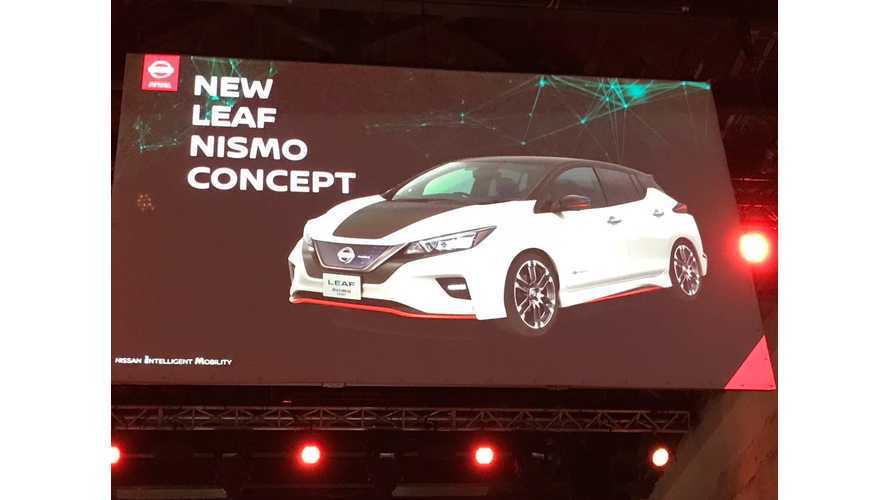 And now a better picture of the new Nissan Leaf Nismo concept... pic.twitter.com/EIX2jaYEap

Nissan has confirmed that it will show off a new Nismo concept based on the 2018 LEAF at the upcoming Tokyo Motor Show.

Turns out that previous reports suggesting a hot Nismo new LEAF were accurate, as the automaker is now displaying images of the Nismo LEAF at an event in Europe.

Word of the Nismo LEAF first came to us via LEAF design chief Alfonso Albaisa. He stated that a “racier version” with NISMO bits was perhaps part of the future plans for the world's #1 selling electric car..

“The previous Leaf’s design wasn’t popular with the majority of people, so its look couldn’t contribute to sales. The new car is lower, wider and sportier, with the point of this design being to get greater accessibility of the market.”

We still don't have any specs on the Nismo LEAF, but those should come soon enough with the Tokyo Motor Show opening to the media on October 25.

We suspect that the Nismo version will feature improved suspension, handling and perhaps a bit more oomph, but on the battery capacity side nobody knows yet if the bigger (60kWh) battery will be found within, or if the Nismo LEAF Concept will be stuck with the smaller pack found in the current 2018 LEAF.

The last-generation Nissan LEAF had a short-lived NISMO version offered in Japan. It was never offered stateside, but fingers crossed that changes this time around.