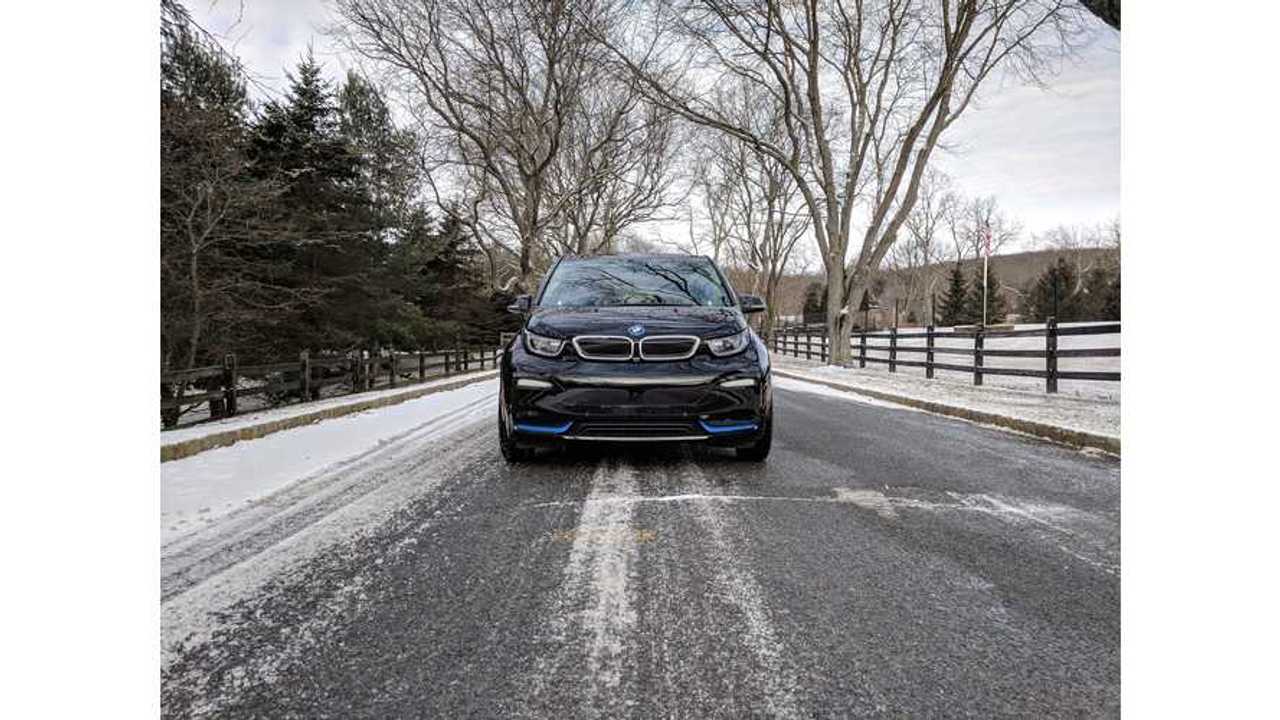 The first 2018 BMW i3s delivered in the U.S. seen here at its first trip to a DC Fast charge station

I was the happy recipient of a Fluid Black i3s BEV, the new Sport version of BMW's electric hatchback.  The delivery took place at BMW of Bloomfield, in Bloomfield, New Jersey.

The BMW i3s is the only version of the i3 that has a Sport mode.

My car actually arrived in Port Newark about three weeks ago but was held there until the recent i3 stop sale was rescinded. The recall and stop sale affected all BMW i3 vehicles sold in the US since its 2014 launch, and lasted for about three and a half weeks. The issue was resolved by a reprogramming of the driver's airbag.

This is actually my second i3. The first was a 2014 i3 with the range extender option. I had a little over 72,000 miles on it when it was unfortunately totalled in an accident this past June. I had been contemplating whether or not to upgrade to a new i3s at the time, so the accident made the decision an easy one for me. I decided to go with a BEV this time because of the additional range that the 33 kWh battery offers, as compared to the i3's original 22 kWh battery.

I've only had a day to drive it so far, but I wanted to get out some of my first impressions.

The first thing I noticed is the new Sport driving mode. Previous versions of the i3 have three driving modes: Comfort (default mode) Eco Pro, and Eco Pro Plus. The i3s has all of those, but it adds a new Sport mode. The owners manual states that the Sport mode offers a "more direct accelerator response and tighter steering characteristics" and I definitely found that to be true. In addition to the Sport mode, The i3s has a new sport suspension which features specially developed springs, shocks, and anti-roll bars.

The i3s has a 44 mm wider track and wider tires than all other versions of the i3.

The new Sport suspension unique to the i3s is 10 mm lower and 44 mm wider, and there's also more rubber on the ground. The i3s has new 20" wheels, which are .5" wider than the previous 20" optional sport wheels available on the i3 (that I had on my 2014). This allows the rear tires to upgrade to 195/50 R20 and the front tires to use 175/55/R20. These new wheels are available in the standard polished silver, and also in Jet Black, as a no-cost option. We had some snow yesterday so I couldn't push the car in the turns too much, but I can already tell that it handles much better than my 2014 Rex did.

The power increase combined with the new sport suspension, wider stance, and better tires makes a huge improvement, especially at higher speeds. The i3s also has a slightly higher top speed than other i3 models. It tops out at 100 mph, which is 6 miles per hour faster than the non-Sport i3.

I actually upgraded my halogen high beam bulbs for LEDs because I wasn't happy with the performance of the halogens. These new LED high beams provide excellent coverage and brightness, and are at least as good as the upgraded LED bulbs that I installed on my 2014 i3. I live in a rural area and good high beams are essential if you don't want to assist the local deer that are trying to commit suicide.

On the inside, there aren't too many changes, the biggest being BMW's new version of iDrive. It's got a completely new look, and now displays three different menu tiles at a time. After using the previous-generation iDrive for four years, I'll need some time to get used to this new one and learn how to quickly access the information I want. At first blush I like what I've seen though.  The 2018 i3's display is not a touchscreen, so all input will be done via the large controller button on the center console, just like the previous version.

All 2018 i3 cars have a new front end with horizontal blinker lights in the bumper where the round high beams used to be. The BMW i3s has the added trim (seen here in blue) on the bottom of the front grill, and it sticks out well beyond the rest of the bumper.

The Deka interior is gray and black cloth with blue trim.

Highway driving is really where the BMW i3s shows its improvements the most.

My car's pretty much fully loaded, except this time I opted for the standard Deka interior. I had the top-of-the-line Tera interior on my 2014 i3 and wanted to change it up this time. The Deka interior wasn't available in the US (it had been standard in Europe since 2014 and called "Atelier") until 2017. I also got the newly-available Blue seat belt option ($300). The back-up camera on my previous i3 was very good, but this one seems to be even better. It's much clearer with less fish-eye effect than the Tesla Model 3's back up camera for sure.

The backup camera is exceptionally clear.

The i3s is a little less efficient than a standard i3. The official EPA rating has it with a 107-mile range, down seven miles from the standard BEV i3's 114-mile range. It's MPGe rated at 126 city, 99 highway with a combined rating of 112 MPGe. The standard i3 BEV with the same 33 kWh battery has a combined MPGe rating of 118 MPGe. I suppose this is a product of the wider tires and the increased power. I managed to get between 90 and 100 miles per charge so far, but it's under 20 degrees here in New Jersey and the roads aren't all completely free of ice and snow. I don't think it will be difficult to get 120 - 125 miles per charge once it warms up here in a few months.

I'll be doing a more comprehensive report soon after I get a couple thousand miles on the odometer first, so I'll have had enough time to really get to know the latest electric hot-hatch from Munich.

I'd like to wish a Happy New Year to the entire InsideEVs community. May 2018 be an electric year for you all.