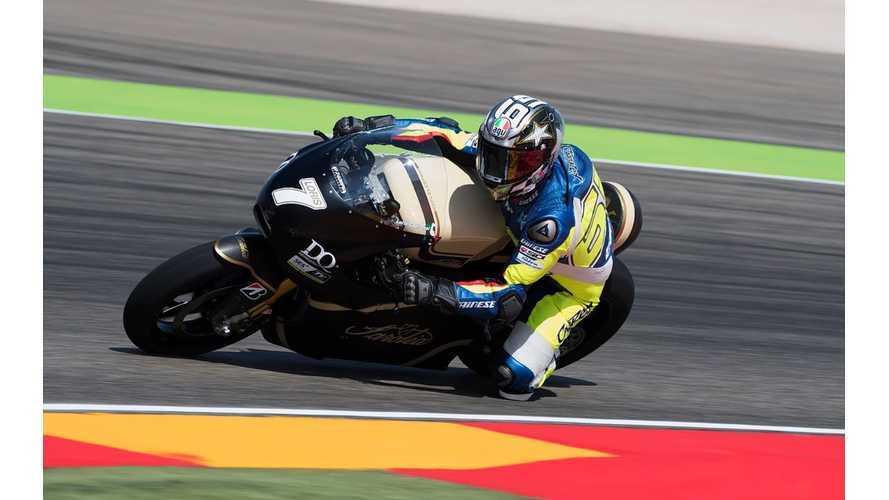 An upstart Belgian brand braces for the future

Saroléa is a Belgian outfit that has phoenixed a motorcycle company fifty years dead and is now lovingly applying the reborn brand to electric motorcycles. It has spent the first few years of its re-existence developing a high-performance bike in the competitive cauldron that is the TT Zero — a one lap race around the 37.7-mile Mountain Course on the Isle of Man.

In preparation for a new, single-marque racing series kicking off in 2019, officials from MotoGP organizer Dorna were on hand to watch former racer Loris Capirossi try the Saroléa SP7 out on Aragón, a track outside of Alcañiz, Spain. According to Bjorn Robbens, one of the twin brothers behind motorcycle maker,

"Loris Capirossi seemed impressed with the motors character and the relatively low weight of the bike. He already tested other bikes that qualify for this cup, and I suspect they had heavier motorcycles."

According to the company, other contenders include Lightning Motorcycles, Energica, and possibly Mahindra or KTM, with the final result to be made known as soon as next month.

Now, about that Manx7. Though still shrouded in shadows with its exact price unknown, there is a good bit we can say about it. If you like the retro-electric look of the SP7 race bike, you'll probably like this. It puts out a notable 150 kW (204 horsepower) with twist rated at 332 pound feet. Good luck finding a bike on the street that can keep up, at least until it reaches its 150 mile per hour (240 kph) top speed.

It takes about 1,500 hours to hand build the bikes. The monocoque chassis, swingarm, and bodywork are all composed of carbon fiber keeping the weight to 430 pounds. This, despite the fact that it comes with a 14 kWh hour battery. If the (somewhat optimistic-sounding) 205 miles of range isn't enough from the standard battery box, there are 18 and 22 kWh options available.

Speaking of options, they can ship with magnesium or carbon fiber wheels as well, along with 4G connectivity. Being the boutique builder it is, bespoke options are yours for the asking. "You dream it, we build it," they say.

Meanwhile, we're dreaming as hard as we can, but aren't sure we'll have the kind of scratch needed to make a purchase. Certainly, we hope someone does. The bikes these boys have previously built just have that special something that tugs at our souls. It would be a cruel world that didn't demand they make more.