We Hitched A Ride With The Tesla Model 3 Road Trip

It happened! I've been writing about electric vehicle maker Tesla for some ten years now, and after many fruitless attempts to get myself behind a wheel, I finally got to drive one of the California-built cars. Not only that, it was the somewhat elusive "affordable" Tesla Model 3. Though it was a relatively short ride, hours later, I'm still pretty jazzed. 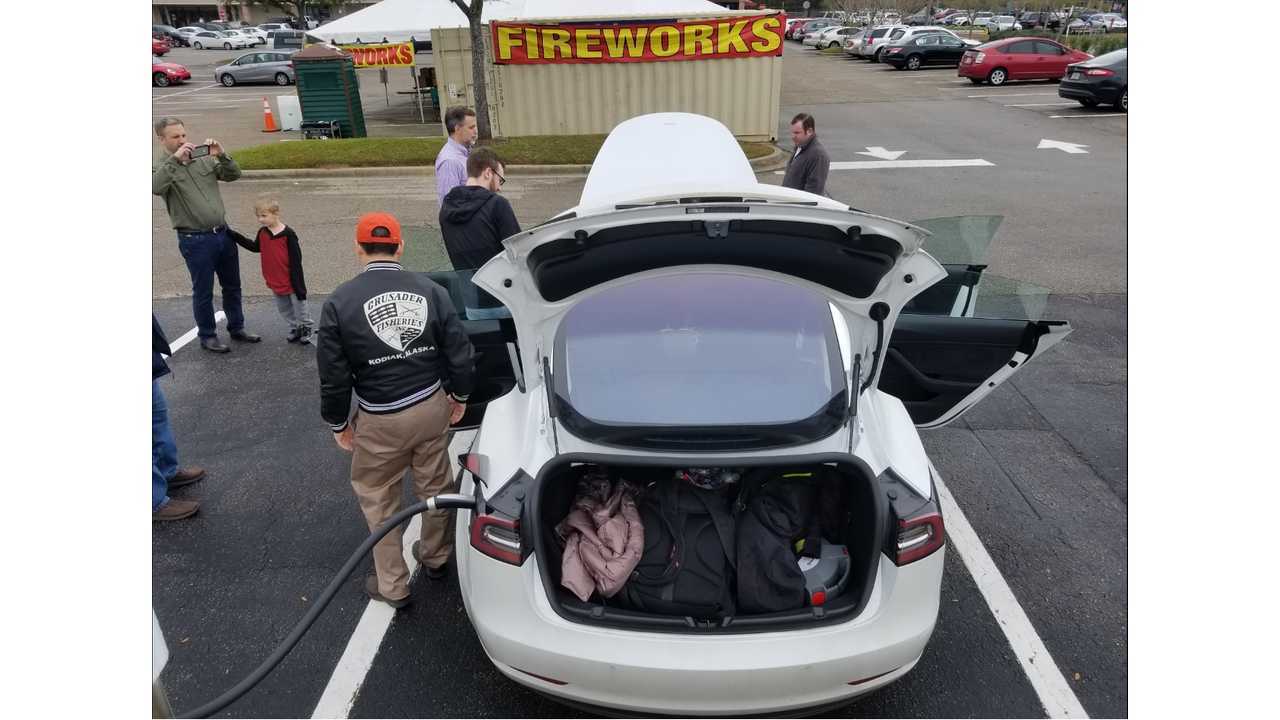 Every orifice open, the Tesla Model 3 gets swarmed.

This professional breakthrough came about due to the whim of a student by the name of You You Xue (pronounced Yo-Yo Shay). A first-day reservation holder and Model S owner (P100D, thank you very much), he had kicked around the idea of driving his new Model 3 across the country, meeting other reservation holders who hadn't had a chance to see the car in person.  Before he knew it, the impulse had turned into a full-fledged effort, with a Facebook page inventively named "Tesla Model 3 Road Trip," and hundreds following his progress on Glympse.

Four days into his unexpected adventure, Xue pulled into the Tallahassee, Florida Supercharger station under leaden skies, where a handful of eager reservation holders were waiting to see their future vehicle up close. Quickly plugging in, he set about some housekeeping chores, simultaneously answering a peppering of questions with practiced efficiency. This was his 20th such stop on a journey that had started in California, and will continue for the next couple weeks, as he dips down to South Florida before making his way up the length of the east coast, crossing the border into Canada for the 460-mile jaunt from Quebec City, Quebec to Toronto, Ontario, and then re-entering the U.S. in Michigan. A hundred more stops after holding court in Florida's capital city, the tour will end its North American component in Vacaville, California. Or possibly Fremont. His itinerary is a bit fluid.

Besides creating first in-person impressions for potentially thousands — letting many (for a small fee) get some wheel time of their own — Xue is also jotting down his own unvarnished feelings and findings, both good and bad. No Tesla apologist, he faithfully notes a number of faults and issues he's found. Everything from weird speaker issues to the windshield wipers making a knocking sound, he faithfully records every concern and compliment. Indeed, while we were just sitting in it in the parking lot, a metallic clunk sounded from from the back of the car for no apparent reason (I thought it might have been a contactor switch), followed by a worrying warning on the big center screen that said the car "may not restart." Luckily, it was something transitory, and the message went away, and the car operated normally when we headed out moments later. 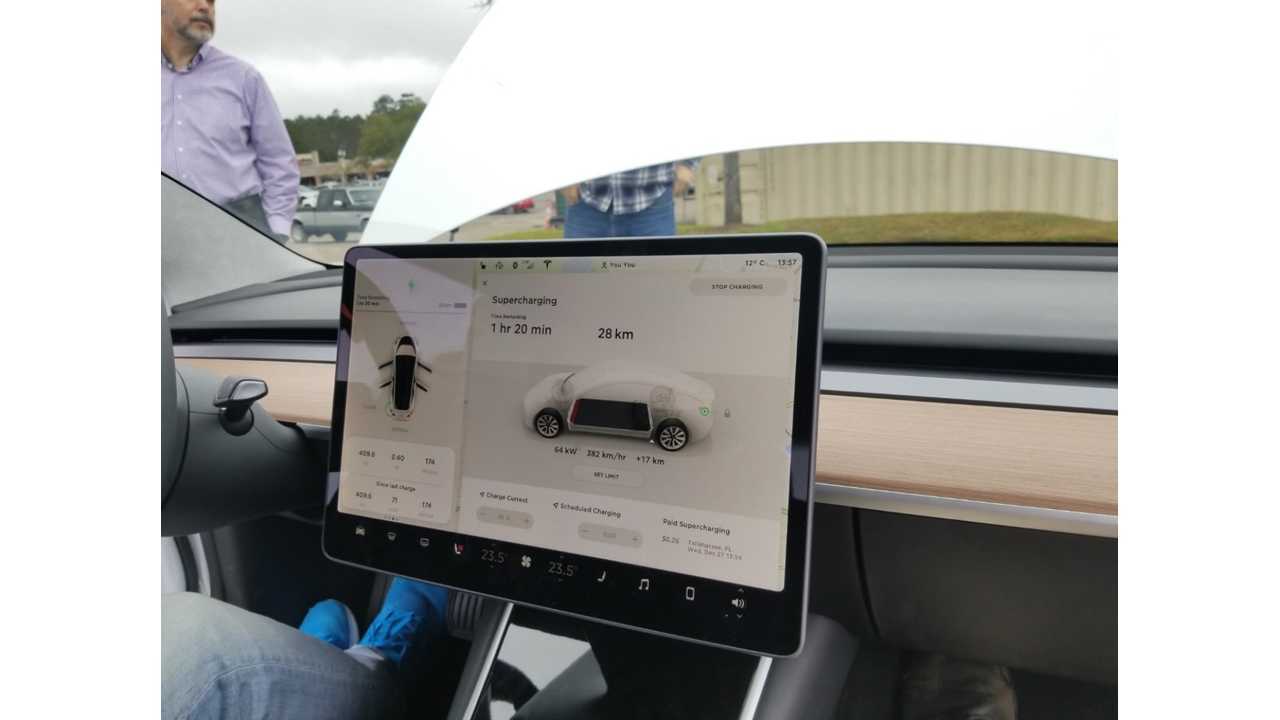 The steering wheel was my first pleasant surprise. Slightly on the small side, its quality seemed much better in person than in pictures, and the two track wheels had very little play and responded nicely to upward scrolling and sideways clicking. Pushing up on the gear selector to put it in reverse, the 3 didn't start to roll backward as I'd expected, waiting instead for me to add a touch of pressure to the accelerator. Approaching the first traffic light, I found the regenerative braking to be much stronger than I had expected. My time in the driver's seat was too short to adjust to the character of the regen, but most owners should become accustomed pretty quickly.

With rain now softly falling, the wiper controls on the screen were too elusive for me to quickly grasp on the fly, so I settled for pressing on the end of the wiper stalk for a quick sweep now and then. "Intuitive" is not a word that sprang to mind as I struggled with several of the controls. Still, I prefer the Tesla touch screen approach to the massive array of buttons and knobs found in some other vehicles.

Making my way through traffic, Xue suggested trying out the acceleration, and I was only too happy to oblige. Up to this point, I had been driving demurely, but having gained permission, I gave the accelerator a bit of a shove. The car sprung instantly to life, leaping forward, pushing me back into the comfortable faux leather seat. The surge is ironically dramatic due to the lack of the aural drama of an engine revving. I let off the pedal and the regen brought our speed quickly back within the posted limit. I can see where this ability to suddenly and silently rake the flanks could deepen an appreciation of red lights and merging from off-ramps.

As many reviewers have commented, the steering is very direct with decent feel. I pulled a (legal) U-turn to head back to the Superchargers and noted the turning radius wasn't larger than I might have expected. This would have also been a good opportunity to give it the beans and further decrease the turning circle by breaking the back wheels loose, but for two things: it could be a slightly risky thing in a vehicle I'm not familiar with, and there's a strong chance that traction control would have prevented the rear end from sliding out. As you can see in the video below, in the Model 3 doughnuts are not really a thing you can do.

When we got back to the parking lot, we decided to try out the auto park feature. To get it to take effect, you have to slowly roll through the lot close to the parked vehicles, and when the sensors detect a spot the car can fit in, a green "P" appears on the screen.  It wasn't great at recognizing available spaces that were more than one vehicle wide, but when it did eventually find one, I braked and touched the "P" that had materialized on the screen. I then took my hands and feet off the controls and, somewhat slowly, the car executed a 3-point parking maneuver, at one point coming extremely close to one of the vehicles it was parking beside, before pulling ahead to make the final ingress. 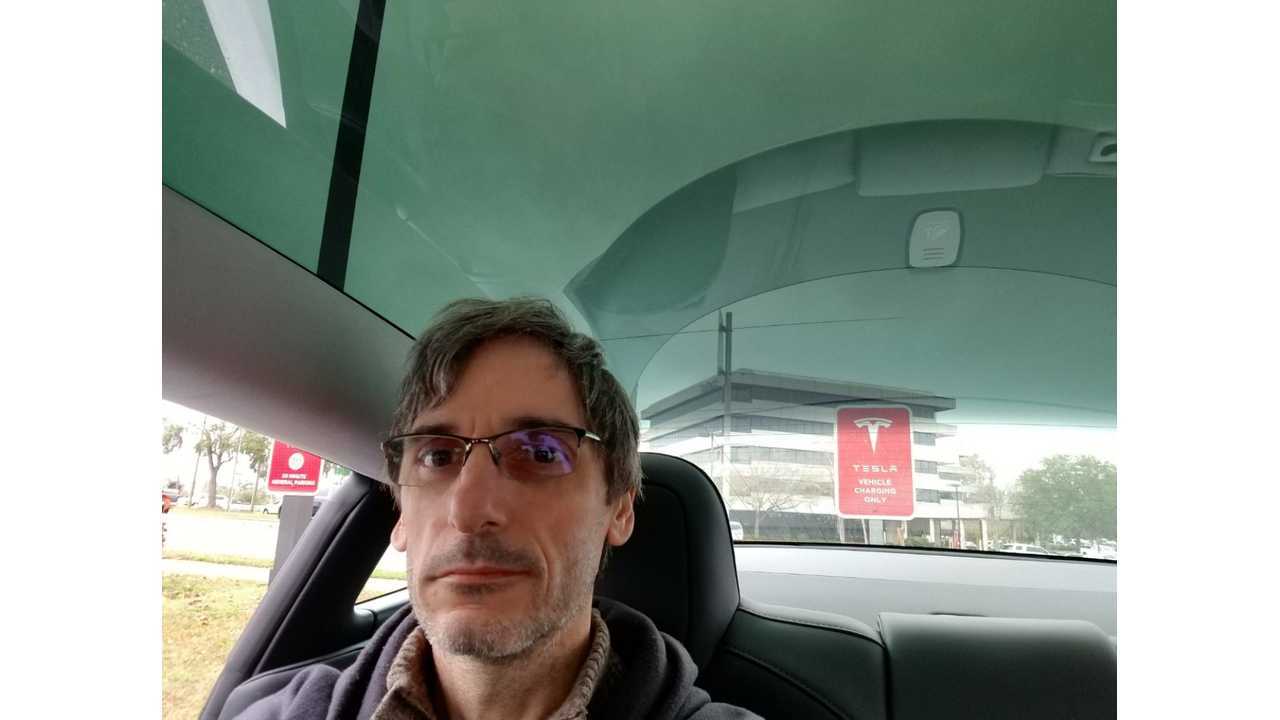 Your humble scribe who, at 6'2", has lots of headspace in the back seat.

My drive too quickly over, I spent some time weighing the Model 3 and its place in the universe. It's the car that could make, or possibly break Tesla. With an estimated half million reservations outstanding, it could help put the company in the black if they can crank them out as quickly as the 10,000 per week it's targeted. On the other hand, if early owners like You You Xue experience too many problems or some other unforeseen issue arises, like the need to upgrade equipment to eventually achieve full autonomy as promised, that massive order book could shrivel up, forcing the automaker to restructure, and slow down the rollout of other announced models like the Tesla Semi, Roadster, Model Y, and Pickup.

If history is any example, Tesla will ultimately succeed in smoothing out the roughest of the wrinkles, but it really needs to push hard to improve quality and customer experience even at this early stage. Actually, earlier. It's not acceptable for a car to have as many issues as the Tesla Model 3 Road Trip vehicle has had. (Other owners with even more miles on their Model 3's have said they aren't experiencing any issues, so at least it seems the cars aren't uniformly problematic.)

Still, a lot of customers may be willing to forgive small imperfections in panel gaps or other annoyances if the overall experience is as satisfying as nailing the accelerator. That's because Tesla isn't just hawking cars. It's selling the opportunity to participate in a technical revolution that will see transportation move from fossil fuels to a better, cleaner alternative. Until the traditional manufacturers catch up, there's lots of value there. The challenge is in balancing speed of innovation with quality.