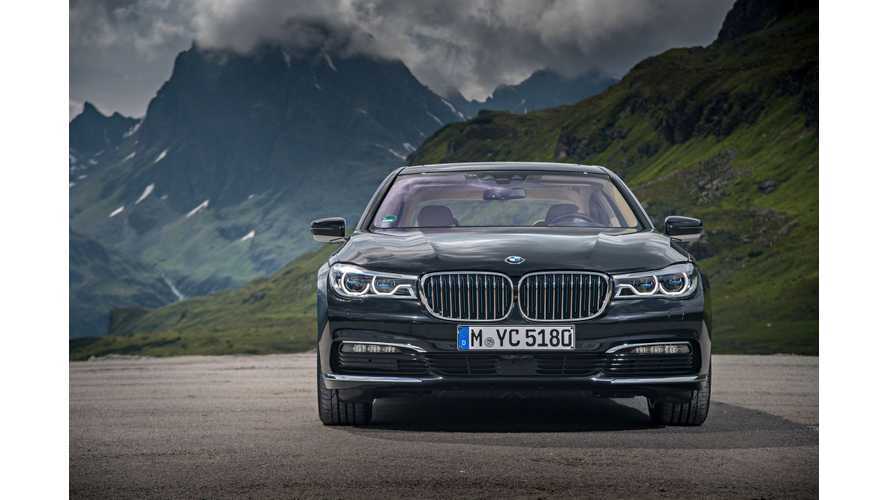 Look for a digital instrument panel inside, too.

BMW will reportedly give the 740e plug-in hybrid a big powertrain update for the 2019 model year that will possibly prompt a name change to the 745e. A more powerful electric motor and higher capacity batteries will mean a higher output and a longer electric range, according to BMW Blog citing anonymous sources from BMW in Munich, Germany.

The upgraded plug-in 7 Series would use the same 2.0-liter turbocharged four-cylinder, but the more potent electric motor would reportedly push the total output to 390 horsepower (291 kilowatts) from the current 322 hp (240 kW). The existing 740e can reach 60 mph (96 kph) in 5.1 seconds, so the extra power might be enough to push that figure into a high four-second range.

The higher-capacity batteries will be the same physical size but with an improved energy density over the current 9.2-kilowatt-hours. If the density gains are similar to what is planned elsewhere in the lineup, the current 14-mile (23-kilometer) range could get boosted north of 20 miles (32 km).  According to BMW Blog, the EV system upgrade would also allow for wireless charging.

In addition to the powertrain improvements, the 7 Series would allegedly follow the current trend for vehicle interiors by switching to a fully digital instrument panel.

Senior Editor Jake Holmes reviewed the existing 740e and came away generally impressed. He praised the powertrain by saying: "Strong acceleration and smooth operation belie any indication that the powertrain is a non-traditional setup. There’s little noise or vibration to announce when the gas engine turns on or off."

However, he found the lack of a digital instrument panel to be a weakness by writing: "BMW’s color display doesn’t provide much more than fuel economy or adaptive-cruise information."

If you want the efficiency of a PHEV but would prefer a more aggressive look, BMW has M Performance accessories for the 740e.  They give the model a sporty look without sacrificing its economy.