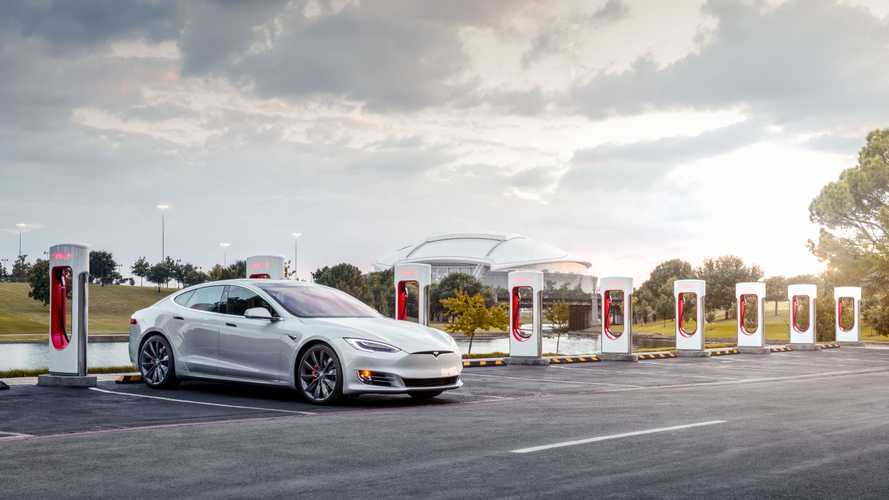 Tesla Supercharger expansion was exponential in 2017, though the automaker won't quite pull off its goal.

Tesla broke records this year with its Supercharger expansion. The automaker really didn't have a choice since moving into 2018 there will begin to be a significant increase in Tesla vehicles on the road. Now that it appears Model 3 production is moving along, the goal of doubling Superchargers needs to stay near the top of Tesla's list.

A picture of one of the new (largest in the U.S.) Tesla Supercharger stations.

According to Electrek, the Silicon Valley electric car maker added some ~3,150 Superchargers across the globe throughout the year. The units reside in about 350 new station location. Opening the year, Tesla was owner to about 5,000 Superchargers at 770 locations, with a goal to make that number double. The goal will likely be hit very soon, but not quite yet.

Today, Tesla sits around the 8,250 mark for single Superchargers. Global stations have now reached 1,120. It's pretty clear that doubling won't happen, but with the automaker's end-of-the-year push, we'll see a number up over 60 percent growth. It all depends on how quickly Tesla can wrap up work on a number of locations that appear to be nearly complete.

Being that the Tesla fell way behind on Model 3 production this year, the additional stations grew much more than needed when factoring in fleet growth. Also, while expansion outside of the U.S. is welcome and always necessary, the large number of Model 3 reservations throughout the globe won't be filled for quite some time, so Tesla will just be one step ahead when it comes to getting charging infrastructure in place.

Tesla hopes to more than double the number of Superchargers once again for 2018, with a lofty goal of 18,000 by the close of the coming year.