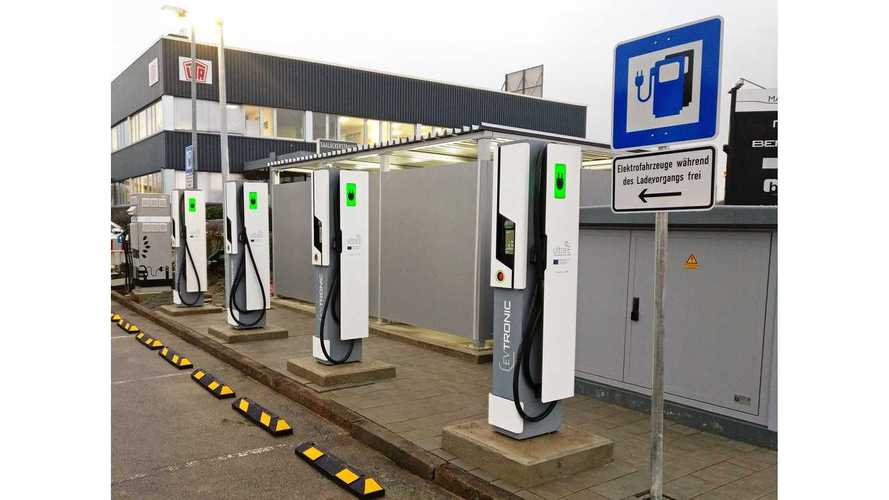 On December 21, Allego announced the installation of Europe’s first public ultra-fast charging station in Kleinostheim near Frankfurt, Germany, just off the A3 motorway.

Under the Ultra-E projec,t a total of 21 stations will be installed throughout the Netherlands, Belgium and Germany - right up to the Austrian border.

We initially associate ultra-fast charging with a rate of 350 kW, but it's not in this case...or at least not yet.

Allego has installed 4 EVTRONIC chargers (with CCS Combo plugs) rated at 175 kW each. The 350 kW power level (for two cars simultaneously) is to be available after an upgrade in Spring 2018.

There is also a multi-standard 50 kW unit on site.

175 kW is the highest level for charging cars available publicly. Because there are four stalls, and an upcoming undefined upgrade to 350 kW, we are now looking forward to EVs that can handle such a high power rate - and are awaiting those first reports from users.

"As of today, Europe has its first publicly accessible ‘ultra-fast charger point’. This new generation of fast charging stations is part of a transnational network of pioneering charging technology. Allego is currently equipping a corridor that runs through the Netherlands, Belgium and Germany right up to the Austrian border with 21 ultra-fast charging stations. These enable upcoming models of long range electric cars to charge a range of 100 kilometres in five minutes.

The first fast chargers are now operational in Kleinostheim near by Frankfurt am Main, Germany, near the A3 motorway. The four ultra-fast chargers are located at the Aschaffenburg-West exit on Saaläcker Strasse. Four e-cars can be charged simultaneously at the stations, initially with 175 kW. I n the spring of 2018, the charging stations will be upgraded to enable up to 350 kW to be charged at two of the four connections – making for even faster charging. The facilities at the station will be supplemented with an additional multi-standard 50kW charger. The new ‘Ultra-E’ charging stations will be erected at intervals of 150 to 200 kilometres, in the immediate vicinity of motorway exits. More stations will follow, the next one in Bernau am Chiemsee, Southeast Germany.

From the summer of 2018, destinations on the corridor from the Dutch coast to the Austrian border will be more easily accessible in an e-car. ‘We are delighted to be setting a milestone for future electro-mobility in Europe with this new generation of fast chargers,’ says Allego COO Ulf Schulte. The ultra-fast charging stations are designed to accommodate many current and future types of e-car. They are particularly suited to the new long range e-cars that will be available from 2018. With these new ultra-fast chargers, Allego is supplementing its existing fast charging network of 250 50kW charging stations, making it a pioneer in Europe. ‘Interoperability comes as standard at Allego. We support all the current charging cards and access apps, enabling anyone to charge their e-car at Allego and quickly be on their way,’ says Schulte. ‘It is thanks chiefly to our working relationships with our numerous partners that we are able to offer this comprehensive service.’

The ‘Ultra-E’ project is funded by an alliance of energy companies, vehicle manufacturers, automotive suppliers, a roaming platform and public institutions. Besides Allego BV, which acts as coordinator, Audi AG, BMW i, Renault Magna, Bayern Innovativ, Hubject, Smatrics and Verbund AG are also involved. A total budget of EUR 13 million is available for the expansion of the ‘Ultra-E’ corridor, which is part-financed by the European Union’s ‘Connecting Europe Facility’."