Mercedes Bets Big On EVs With New US Investment, Musk Tweets Not Enough - Then Gets Smacked Down 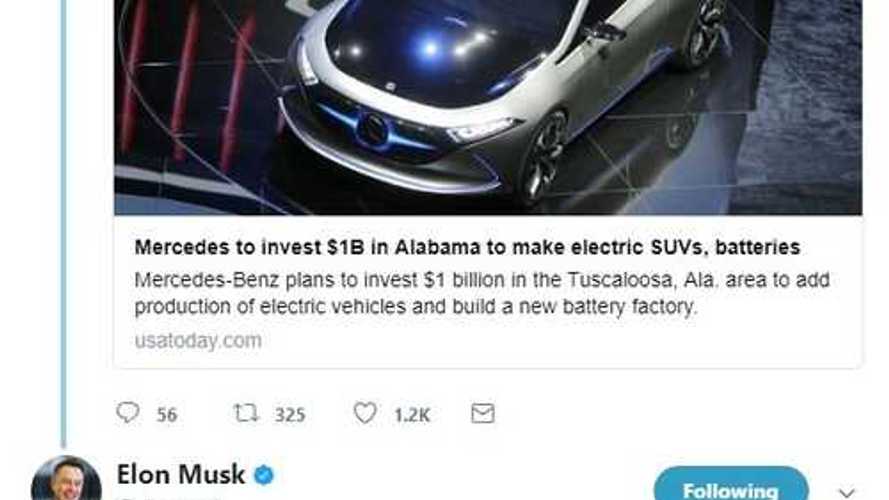 Mercedes-Benz announced a new $1 billion EV-related investment into its manufacturing plant in Tuscaloosa, Alabama - on the 20th anniversary of the facility.

The investment will expand the operations of its existing manufacturing plant to accomodate the production of passenger EVs in the U.S., as well as to add battery production for those upcoming electrified cars.

The Tuscaloosa plant will produce "SUV models for the company’s EQ brand", which could mean both all-electric (such as the EQC) and/or plug-in hybrids as well.

Construction of a new battery production facility (the 5th for Daimler), near the existing plant will begin in 2018.  EV production should then start around the end of this decade.

But what made the announcement 'fun' was when Elon Musk decided to retort to a random USA Today story on the event, after being egged on by the paper in a tweet.

Musk stated that that the German company's investment was "not a lot of money for a giant like Daimler/Mercedes", adding that he wished they would do more, "...off by a zero" Musk tweeted.

That's not a lot of money for a giant like Daimler/Mercedes. Wish they'd do more. Off by a zero.

Here is the thing, that $1 billion investment was just into this one plant and not a cumulative number, Daimler has actually has announced (and is now installing) more than $10 billion into advancing its EV program.  In a rare twitter-fight, Daimler AG (which is just 25% larger than Tesla by market cap) fired back.

So, the Tesla CEO got a bit owned there, and it is surprising Musk had not been following one of his main competitor's more closely; but then again, we have all gotten a bit in front of ourselves from time-to-time - and to his credit, Musk did tweet back , but in the most concise of ways.

Still, it is a bit odd to see the confrontation in the first place, as Daimler is widely credited (by Musk himself no less) for saving Tesla with a $50 million dollar investment in the EV maker in 2009.

Anyway, back to the news at hand.

Bringing electric car production to Tuscaloosa ultimately will result in more than 600 new jobs according to Mercedes.

The production of the all-electric SUV (EQ C), will begin in Bremen, Germany in 2019 (followed by three other EQ models). It's unlikely (probably less than a 1% chance) that production in U.S. for US customers would start before German-based production comes online.

Electric initiative and expansion of operations in Alabama: Mercedes-Benz strengthens manufacturing footprint in the U.S. with $1 billion investment

Tuscaloosa, AL/USA – As part of its ongoing commitment to engineer and manufacture the world’s most attractive vehicles, Mercedes-Benz will set up electric vehicle production in the United States. The company plans to produce EQ-branded SUV models at MBUSI (Mercedes-Benz U.S. International), its Tuscaloosa, Alabama facility. At the time being launched, the EQ models will feature the latest status of automated driving - always under the premise of safety and in compliance with the statutory regulations. In addition, a battery plant will also be built near the existing passenger-car plant ensuring availability of cutting-edge technology for future generations of Mercedes-Benz vehicles built in the U.S. In total, Mercedes-Benz plans to invest $1 billion in the expansion of its industrial footprint in the region, most of which is slated for the electric initiative. It is expected that once completed these investments will create more than 600 additional jobs. Final details of the plans are still being worked on in partnership with the State of Alabama.

“We are excited to celebrate 20 years of production in Tuscaloosa by expanding our operations in the region and by bringing our electric initiative to the United States. With this one billion dollar investment, we are significantly growing our manufacturing footprint here in Alabama, while sending a clear message to our customers across the U.S. and around the world: Mercedes-Benz will continue to be on the cutting-edge of electric vehicle development and production,” said Markus Schäfer, Member of the Divisional Board of Mercedes-Benz Cars, Production and Supply Chain. “With production locations for EVs and batteries in Europe, China and, now, the U.S., our global network is ready for the era of electric vehicles. Thanks to our plant modernization in Tuscaloosa, we will be able to quickly ramp up U.S. production of EQ models, while also being more flexible to our customers’ demands for innovative vehicles that live up to the excellent quality that is synonymous with the Mercedes-Benz brand.”

In addition to the electric initiative, the logistics activities in the U.S. will be expanded with a new Global Logistics Center and a new after-sales North American hub, exporting car-kits to global assembly plants and spare parts from the U.S. and North America to worldwide markets.

“With the addition of electric SUVs to our future fleet, we will provide discerning drivers with a new, high quality automotive option that will marry performance, luxury, and environmental stewardship,” Markus Schäfer said. “As a result of our investments in Alabama, Mercedes-Benz customers will soon be able to enjoy advanced technology coupled with a luxury driving experience.”

The plant in Tuscaloosa exclusively provides worldwide clients with the SUV models GLE, GLS and GLE Coupé that continue the proud tradition of quality associated with Mercedes-Benz. With the upcoming production of the next SUV generation the plant will enhance its proven production portfolio with modern plug-in hybrids, responding flexibly and efficiently to market demand. With the additional integration of electric vehicles, the plant is shaping the future of electric mobility worldwide. The announcement was part of the 20-year celebration at MBUSI. Dignitaries attending the event included Alabama Governor Kay Ellen Ivey as well as other local and state officials.

“This is an exciting day for MBUSI and our entire team here in Alabama,” said Jason Hoff, President and CEO of Mercedes-Benz U.S. International during the “All Team Member” meeting. “Looking back on 20 years of production, the Mercedes-Benz plant in Tuscaloosa has been a success story from the beginning. We are now continuing this story with a clear vision for the era of electric mobility. We are proud that Tuscaloosa will be an integral part of our company’s evolution to electric vehicles contributing to the long-term success of Mercedes-Benz Cars.”

“The fact that Mercedes-Benz continues to expand its operations in Alabama makes a powerful statement about the quality of the global automaker’s workforce in the state, and underscores that we are achieving our goal of ensuring businesses in Alabama don't just survive, but thrive,” Governor Kay Ivey said. “For the past two decades, MBUSI has been a tremendous partner in the growth of our state, and we look forward to strengthening those bonds in the years to come.”

Tuscaloosa is home to Mercedes-Benz’s SUV production for the world market, having started production of the former M-Class (today the GLE) in 1997. As the first automotive manufacturing location in the State of Alabama, the plant also served as the catalyst for additional OEMs, automotive suppliers and supporting businesses to come to the area, creating thousands of jobs in the region and leading to Alabama's strong position as one of the key automotive business clusters in the United States. Mercedes-Benz exports more than 70 percent of its SUVs to markets around the globe. With an earlier investment of $1.3 billion announced in 2015, the plant is currently being expanded to prepare for the production of the next SUV generation including plug-in hybrid models. The plant expansion comprises a new Body Shop, major enhancements to the SUV Assembly Shop as well as upgraded logistics and IT systems.

Electric vehicles from the family of EQ branded products

Mercedes-Benz will start producing SUV models of the EQ brand in Tuscaloosa at the beginning of the next decade. EQ models will be integrated into the series production at the plant. This is possible because of the early investments in flexibility and technical equipment at the plant that offer trailblazing Industry 4.0 technologies. With the Tuscaloosa plant, Mercedes-Benz will have electric mobility hubs on three continents serving customers’ demand around the globe.

By 2022, the company will electrify the entire portfolio of Mercedes, offering customers at least one electrified alternative in all segments from smart to large SUVs. The company is planning to offer more than 50 electrified vehicle variants. At the same time, Mercedes-Benz will be continuously supporting the development of plug-in hybrids and the introduction of 48-volt-systems. The first EQ series model, EQC, will go into production in 2019 in Bremen, Germany. Technology and product brand EQ is an integral part of CASE, which stands for the intelligent combination of the strategic pillars of connectivity (Connected), autonomous driving (Autonomous), flexible use (Shared & Services) and electric drive systems (Electric).

The battery factory near plant Tuscaloosa will be part of the global battery production network of Mercedes-Benz Cars for local demand and export. In total, Daimler will invest $1.18 billion (more than one billion Euros) in the battery production network, which will also include production facilities in Germany and China. As in vehicle production, the battery production network will react flexibly and efficiently to market demand. This strategy ensures the ongoing availability of modern battery technology through local production hubs in Europe, China and the U.S. and puts Mercedes-Benz in a highly competitive position for its electric initiative. Construction work for the new one million square-foot facility in Tuscaloosa is expected to begin in 2018, with operations planned to start at the beginning of the next decade.

Expanding its industrial footprint, Mercedes-Benz is also building a new Global Logistics Center and a new after-sales North American hub in Bibb County, five miles from the plant in Tuscaloosa.

The Global Logistics Center will support worldwide logistics operations connected with products “Made in Tuscaloosa” and will supply oversea assembly plants with car-kits, where Mercedes-Benz produces vehicles for local markets. Operations including brand new IT systems to support lean logistics processes in the new warehouse are scheduled to begin in 2019.

Additionally, Mercedes-Benz is consolidating the three existing after-sales warehouses at a new location. The new after-sales North American hub will be co-located with the new Global Logistics Center providing markets abroad with spare parts. This allows the company to meet rising market demands amid the growing variety of models. The new hub is scheduled to start its operations at the end of 2020.

MBUSI – located in Tuscaloosa County, Alabama - is the production location for the GLE, GLS and GLE Coupe SUVs around the world, as well as the C-Class sedan for North America. In 2016, the plant produced more than 310,000 vehicles. MBUSI currently employs more than 3,700 team members and supports 7,000+ jobs on the approximately 1,000-acre site. In September 2015, MBUSI announced a $1.3-billion plant expansion and new jobs to pave the way for production of future SUVs. The expansion makes plant Tuscaloosa one of the “smartest” automotive facilities in the world."