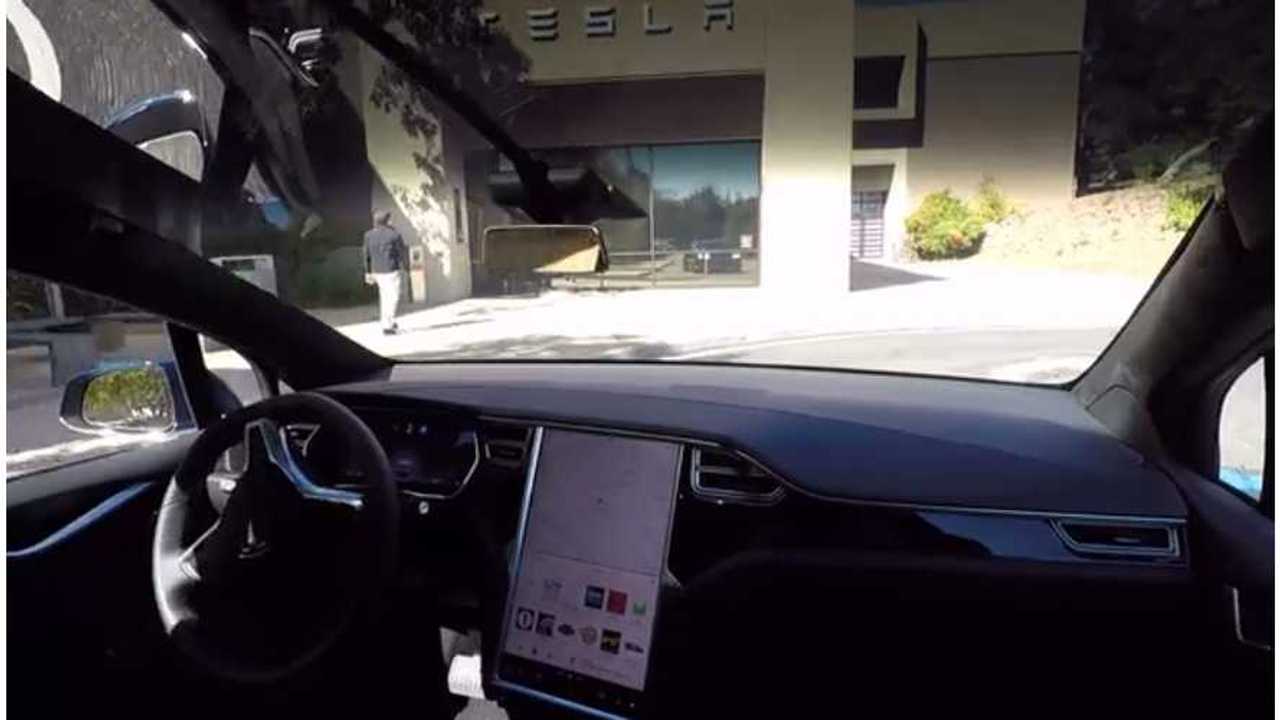 All vehicles now come standard with all self-driving hardware, but software is still being tested and will have to undergo regulatory approval prior to launch." draggable="false">

Tesla Model X Self-Driving Video - All vehicles now come standard with all self-driving hardware, but software is still being tested and will have to undergo regulatory approval prior to launch.

We haven't heard much about Tesla's Full Self-Driving efforts since the debut of the Model X (pictured above). Now the automaker seems to be taking a huge step forward.

Back in October of 2016, Tesla released footage of its self-driving Model X and announced the news that all vehicles would come off the assembly line with all the hardware necessary for full self-driving. CEO Elon Musk has promised that prior to the end of 2017, a Tesla vehicle will drive from coast-to-coast, across the U.S. unassisted (although there will be a driver in the car).

Since then, we haven't heard much talk about the progress. Tesla has been busy with the Model 3 and the electric Semi. Aside from this, the automaker has been constantly updating its Autopilot 2.0 system to reach parity with the original first-generation Mobileye Autopilot. Mobileye has since left the partnership and Tesla is building the system from the ground up, on its own, though it does use chips from NVIDIA. This may be the main reason that the self-driving news has come to a standstill.

It appears that the Silicon Valley automaker has been working on solidifying a new, viable partnership and the time may have arrived. AMD is reportedly joining the electric carmaker to help develop and refine an Artificial Intelligence (AI) chip for self-driving.

Tesla is already close to finalizing its own self-driving chip, as CNBC reported that a team of about 50 specialists, including well-known chip guru and head of hardware and software for Autopilot, Jim Keller, have been busy with the project. A source with access to the matter told the publication that the initial chip is already back in Tesla's possession and being tested.

No particular reason for the new partnership has been revealed, however, it appears that the automaker has decided not to continue the venture alone, and has thus chosen AMD for involvement. Perhaps the carmaker's proprietary chip is not working as expected, or NVIDIA is unable to satisfy all of Tesla's needs, or the automaker is just overwhelmed enough with Model 3 "production hell" that pawning off some responsibility is the right thing to do.

GlobalFoundries, a spin-off of AMD, was said to have publicly verified its work with Tesla during a recent technology conference in California. The CEO, Sanjay Jha, actually divulged the information on record. However, after the fact, the company said that it doesn't disclose customers and denied the CEO's previous statement. GlobalFoundries is stating the Jha simply mentioned Tesla as an example of the type of companies that the chip-making industry does business with.

Neither AMD nor Tesla have commented on the matter.

*Tesla is surely not the most transparent company and when supposed leaks like this come along it's not uncommon for the original story to be pulled or updated once information is clarified. Although GlobalFoundries CEO did mention "working" with Tesla in his recent speech, the chipmaker has made a statement to Reuters saying that there has been no official partnership commitment with the electric automaker at this point.