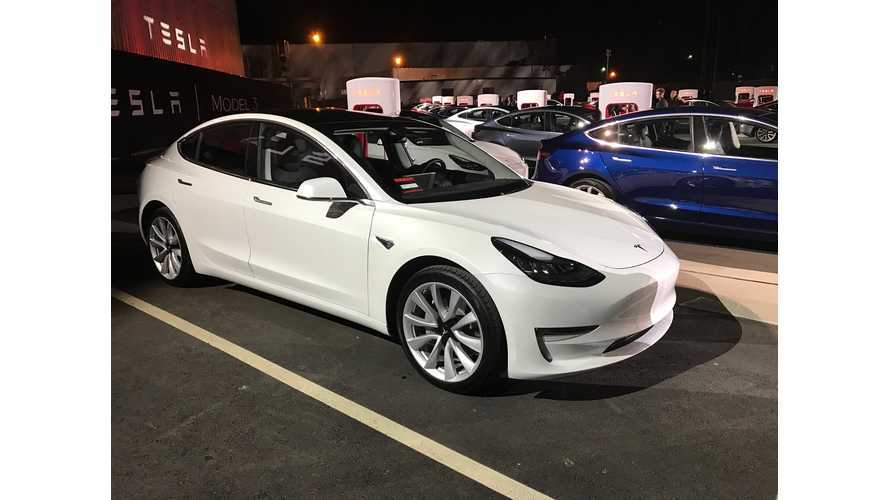 Though you may have to wait a long time to take delivery of your Tesla Model 3, it may hold its value much better than the average vehicle.

Without factoring anything else in, referring to any studies or surveys, or relying on traditional situations, it really comes as no surprise that the Model 3 will hold its value. It's one of the most sought after vehicles of all time and most people probably won't be selling theirs very quickly, if at all. The Model 3 is hard to get, will remain that way for a long time, and is sure to always have a place in the automotive history books.

With all of that being said, we know by now that Ben Sullins relies heavily on data, studies, surveys, and other tangible (maths stuff) to support his information. He refers to a new survey that suggests that the Model 3 will, in fact, hold its value well. For those that don't understand the ins and outs of depreciation, Ben takes us through it with his typical, easy-to-understand delivery.

In a nutshell, when you drive a new car off the lot, it loses 10-50 percent of its value before you pull in your driveway ... sad but true. Every year, your car continues to depreciate another 15-25 percent, and luxury vehicles are notorious for depreciating even quicker. It's not uncommon for a car to be worth 30-40 percent of its original value after five years.

Based on Ben's research, the Tesla Model 3 could retain 70 percent of its value following a five-year period. However, Ben is safe to point out that the survey is a small sample, and due to Autopilot, four-to-five-year-old Model S sedans have terrible resale value.

A New Survey Out Shows That the Model 3 will have better than average depreciation, but there could be one thing which would trip it up.

To understand how depreciation relates to the Model 3, a car currently not available to anyone but Tesla and SpaceX employees, we need to first look at depreciation as it relates to cars in general.

Depreciation is the reduction in value of an asset. From an accounting standpoint, you can think of it as reallocating the cost of the car over its lifespan. As consumers, we can think of depreciation, when it comes to cars, as the difference in price of what we paid to purchase it versus what we sell it for.

So if you buy a car for 50K, then five years later sell it for 25K you have a 50% depreciation rate on that car.

When we think about owning a car, depreciation shows up as the largest cost always in the Total Cost of Ownership model. Popular auto sites like edmunds.com and kbb.org use this model to estimate the total cost you’ll pay for a vehicle over a five-year period. In order to use this measure as a comparative tool for different cars, they need to make some assumptions and consider all the major expense categories such as financing fuel, maintenance, repairs, fees, and insurance.

For most cars depreciation starts the moment you drive off the lot. On average cars lose 10% of their value at this exact moment while some lose as much as half moments after you take ownership.

It doesn’t stop there either; new cars continue to lose value for their entire first five years of operation with an average decline of 15-25 % per year. Most new cars will lose 60 percent of their total value in this time short period.

Recently Autolist.com published the results of a survey they did of 14,476 individuals between Oct 2016 and July 2017 which they used to forecast what the depreciation for a model 3.

Nearly 60% of the people in the auto list survey listed their main reason for not buying an EV as cost and range, if those numbers were to hold up for the larger market, the sky isn’t even the limit for the Tesla model 3. With an estimated 310 miles per charge and a starting price of $35K, the Model 3 should squash the main reasons people had for not buying an EV. Now we obviously don’t have depreciation data for the model 3 yet, but we do have it for the Model S and its in-brand competitors.

So if the Model 3 tracks similarly to the Model S and the in-brand counterparts hold up as they have, the Model 3 will hold around 70% of its value during that five-year period.

The only issue I see here is that the size of their survey is small compared to the overall market and they didn’t list how they collected this data. So, for example, the people they interviewed may have a selection bias which resulted in these findings, and without larger and more studies it’s hard to say that these numbers will hold true. Before we go on, I need to mention one thing, however.

Autopilot was a game changer for Tesla and the Model S. If your car didn’t have autopilot, the value plummeted. Even my car which I bought in 2016, was almost 50% cheaper than it was just three years prior

So could there be something that kills the model 3 resale value? Not likely, the cars come with the latest hardware that will one day allow for full-self driving. The rollout strategy is also going to confuse things when it comes to Model 3 depreciation. In the US it’ll be late 2018 until “most” people have their Model 3 so until then the demand will remain high, possibly even letting owners of the cars sell them for more than what they paid.

We can't forget either, that we only realize depreciation when we sell our car, and who’s ever going to sell their Model 3?