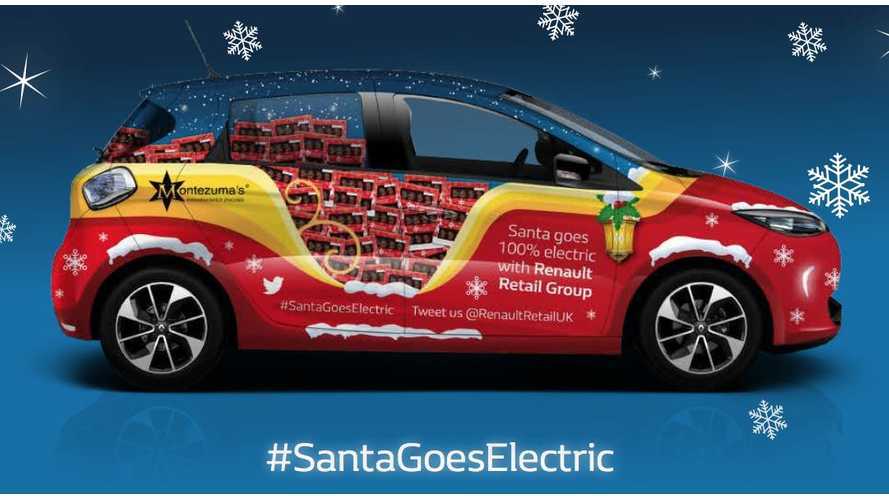 These days being Santa isn't easy, as reindeers become more and more expensive to refuel.

In the UK, the perfect solution seems to be switching to an electric Renault ZOE.

In total, Santa and his elves covered some 820 miles (visiting London, Cardiff, Cannock and Manchester) delivering 1,000 boxes of Christmas chocolate in this ZOE.

According to the Renault Retail Group, nine reindeer working hard for four days would generate 60kg of CO2 equivalent (mainly methane) and consume 179 carrots per mile, which at 6p per carrot costs £10.72 ($14.4) per mile!

Renault ZOE on the other hand uses electricity that costs as little as 2p per mile and releases no CO2 at all.

Renault Retail Group helped Santa spread some Christmas cheer across the UK this December by supplying him with his first 100% electric sleigh to deliver gifts to local people on his ‘nice list’.

Santa and his elves visited London, Cardiff, Cannock and Manchester during their four-day test drive in their new Renault ZOE electric sleigh. Local social media users directed their route by messaging them on Twitter and Facebook with the hashtag #SantaGoesElectric to request a visit and free gift.

1,000 boxes of Christmas chocolate were delivered to the lucky people who got a visit during the 820-mile electric sleigh ride in early December. The chocolates were kindly donated by sustainable chocolate brand Montezuma’s.

(Santa and his elf with members of London Fire Brigade)

The team also stopped at several local hospices, charities and hospitals, including Noah’s Ark Children’s Hospital, South Wales Police and Velindre Cancer Centre in Wales, Acorns Children’s Hospice in Cannock, GCH Acton Care Centre, Torkington House in West London and an after-school club in Manchester. Leftover boxes were donated to St Ann’s Hospice in Manchester and the ‘Hike The Pike’ charity event in Bolton. They also visited social media users who reached out to them using the hashtag #SantaGoesElectric, putting smiles on faces across the UK. Watch highlights of their day here:

“We were overwhelmed with the welcome we received on our trip – Santa even got a fist bump from a passing moped! We met some extremely special people and will remember our day with them for a long time. What started out as a marketing campaign soon turned into something much more, reminding us what Christmas is really all about.”

The project came about when the Corporate Social Responsibility (CSR) team at Santa’s North Pole HQ were shocked to learn that Santa’s 122-million-mile Christmas Eve trip around the world generates approximately 40,600 tonnes of greenhouse gases due to the methane output of his nine reindeer* – that’s why Santa decided to test drive a new Renault ZOE sleigh this year.

Of course, Santa is no ordinary driver – he needed to put the Renault ZOE sleigh through its paces, doing what sleighs do best – delivering presents!

A test drive around four UK cities from 4th to 7th December was planned to help Santa calculate how far the Renault ZOE sleigh could travel and how many presents could be delivered on one charge helping Santa avoid ‘range anxiety’ this Christmas Eve.

Traditionally, this UK trip would generate 60kg of CO2 equivalent (mainly methane) from nine reindeer working hard for four days**. Nine hardworking reindeer will need to consume about 7,328 calories per mile*** – that is 179 carrots per mile (or MPC) which at 6p per carrot**** costs £10.72 per mile.

Santa was thrilled to learn that his new Renault ZOE sleigh costs as little as 2p per mile and releases no CO2 at all. Because he has a long way to travel with a lot of presents he was pleased to learn that the ZOE has a range of 112 – 186 miles per charge and a 338 litre boot – ideal for spreading lots of Christmas cheer far and wide.

The Renault ZOE sleigh safely travelled 820 miles and made a lot of people’s day.

Five care establishments and charities were visited plus more than 40 individuals and businesses. 1,000 boxes of Montezuma’s chocolate were delivered and 820 miles were covered in four days

Not quite ready to go electric? Find out more about the Renault Kadjar, Captur, Scénic, Mégane Hatch.

** Calculation by Professor Piers Forster, Director of the Priestly International Centre for Climate, University of Leeds