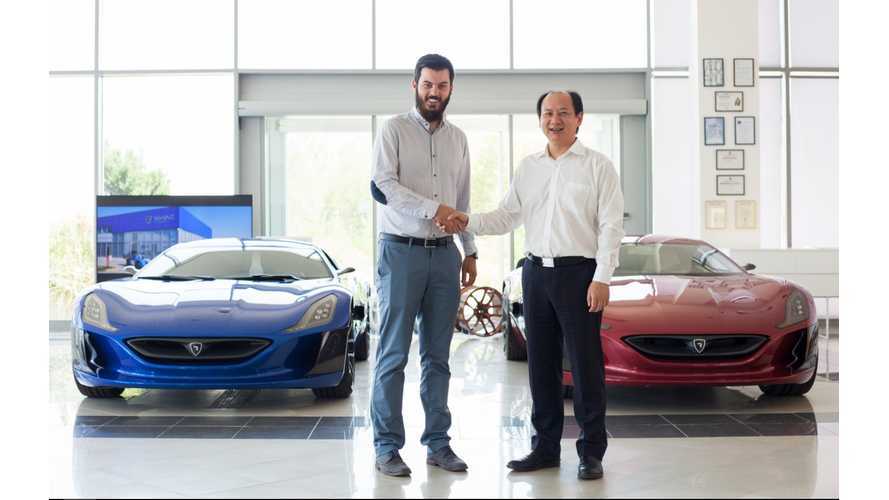 Rimac Automobili, the only electric supercar maker to actually deliver cars to customers, first introduced its flagship Concept_One back in 2011 at the Frankfurt Motor Show. Now, after selling all eight seven examples, along with a pair of  its Concept_S "Evil Twin" variants, the technology development company is starting to talk about its next automotive model.

According to AutoCar, its working name is "Concept_Two" and will be somewhat similar to the Concept_One, in that it will be a supercar coupe. It will also keep some styling cues, including the hommage along its flanks to that most famous of Croation inventions, the necktie. Expect it, though, to have more of everything — more power, more interior space, more luxury, more range, and be more expensive. Don't expect its badge to read "Concept_Two."

Like its forebearer, it will also have variants, so be on the lookout for eventual track and spyder submodels. The "Concept_Two" has a more ambitious production target of 100 examples, with twenty sales expected in the first year. The big reveal should be happen "in the first half of next year." In a separate report, Automotive News Europe claims the veil will be lifted at the "Geneva auto show in March." It also claims production plans call for 200 units.

The news comes as Rimac announces a €30 million ( $35,994,900) investment from Camel Group Ltd., said to be the Asia's largest battery manufacturer (think lead acid). Referred to by Rimac as a "Subscription Agreement," the money will mostly be used to help expand the company, including the creation of a new production facility, while ten percent of the funds will go to the outfit's high-end electric bicycle concern, Greyp Bikes.

For more details, scroll down for the official press release. If you need us, we'll be frantically and futilely busking down on the corner in anticipation. Feel free to drop a coin in our cup.

Asia’s largest battery manufacturer – China-based Camel Group Ltd., has entered into a Subscription Agreement with Rimac Automobili, Greyp Bikes and their founder and CEO Mate Rimac concluding the single largest foreign direct investment in a Croatian technology company. Out of the total investment amount, 3 mil EUR will be allocated to Rimac’s sister company – Greyp Bikes. The Investment will be used to fund the launch of new products, extension of production capacity and global expansion of the companies.

Mate Rimac, Founder and CEO of Rimac and Greyp, commented on the fundraising: “Over the years, we have established ourselves as a technology provider and enabler for many global automotive manufacturers. We have become the go-to address when it comes to electric powertrains, batteries, innovative infotainment and telemetry systems and many other core vehicle systems. At the same time, our supercars are redefining what electric vehicles are capable of and showing that the electrified future will be exciting. In contrast to many other companies in this business, we have a working business model – we are profitable since 2012 and doubling every year organically. This investment will help us further accelerate growth, introduce new products to the market and expand our global presence. Two key areas are building a new, state-of-the-art production facility for our technology business and launching our next-generation electric supercar which will be shown to the world next year.”

Liu Changlai, CEO of Camel Group said: “Our strategy is to move aggressively into the New Energy Vehicle Business – providing advanced battery systems, powertrains and other vehicle components to major commercial and passenger vehicle manufacturers in China. After studying the market deeply, searching for a technology partner, Rimac seemed as the perfect match for us – leading the Electric Vehicle technology development in many areas. During our numerous visits to Croatia and detailed Due Diligence, we were most impressed by Rimac’s deep vertical integration – developing and manufacturing all key vehicle systems in-house. It was also impressive to learn that Rimac, as a young company in a very conservative industry, has earned the trust of some of the largest and most prestigious automotive companies. We are excited to use our synergies to deliver world-class Electric Vehicle components and technologies to the market and help accelerate the transition to a fully-electric fleet.” Rimac Automobili started in a garage in 2009 with the bold goal of proving that electric-powered sportscars can be fun, fast and exciting. Since, Rimac has become an important player in the electric vehicle industry - designing, developing and manufacturing their own high-performance fully electric supercars while delivering key technologies to many global OEMs. Rimac technology is recognized worldwide through established partnerships with Aston Martin, Koenigsegg and many other undisclosed manufacturers. Becoming a Tier 1 supplier to major automotive companies remains the core focus of the company.

Greyp Bikes, a Rimac Automobili sister company, is focused on the development and production of highly advanced electric bicycles. Greyp’s mission is to redefine biking through technology, user experience and electrification.