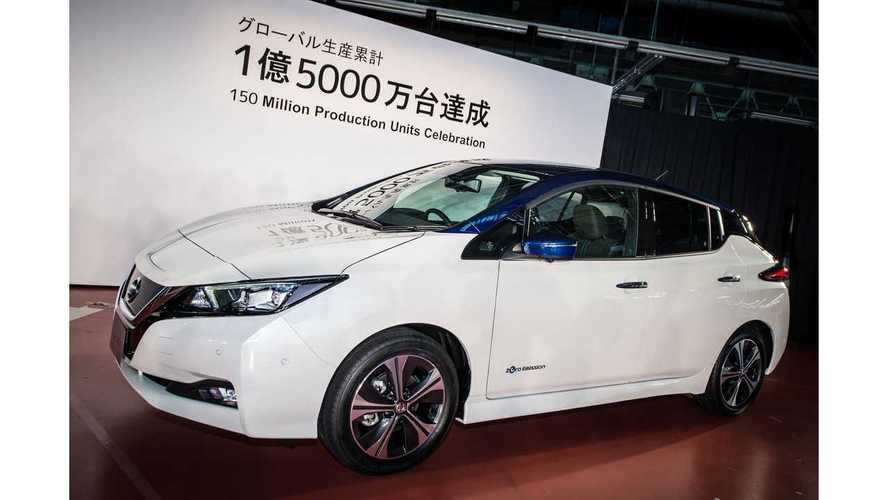 Nissan is now celebrating 150 million vehicles produced globally, a task that took over some 84 years. With that in mind, we note that the 100 million mark was achieved in 2006, so some ~50 million more vehicles have been produced in just over a decade, illustrating the more recent fast growth of the company.

And apparently, if the above video is any indication, the Japanese company considers its second generation LEAF as a jumping-off point into the future, as it prominently places the new LEAF in an extended spot at the end of its celebration video (from 2:20), and also by giving it the final spot in the featured infographic (below).

It was also deemed a good opportunity to celebrate the first 2018 LEAFs produced in Japan at Nissan's Oppama plant.

Those Japanese EVs start to reach customer's hands in less than ~2 weeks (October 2nd, 2017); Nissan isn't big on making customers wait months or years between showing a new model, and delivering a new model.  For the US and Europe, 2018 LEAF deliveries start in January.

"Nissan Motor Co., Ltd. has reached a new milestone with 150 million vehicles produced globally. It took 73 years for Nissan to produce its first 100 million vehicles after the company was founded in 1933, and another 11 years to build the last 50 million.

Nissan sees this achievement as the result of 84 years of continued support from all of its stakeholders worldwide, including employees, dealers, suppliers and local communities, as well as the numerous customers who have chosen cars produced by Nissan.

When Nissan reached the 100 million vehicle milestone in 2006, 76.5% of the total vehicles had been produced in Japan. Localization of production accelerated in the past 11 years, during which 76.5% of the 50 million Nissan vehicles were made outside Japan – driven in particular by the U.S. and China.