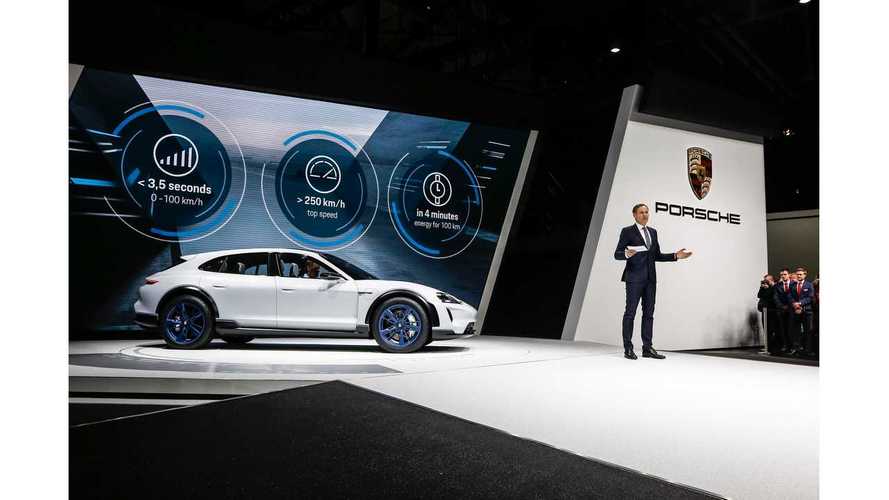 Recharging the battery for a little over 15 minutes is enough for a range of about 250 miles.

It’s safe to say the Volkswagen Group has its fair share of lifted rugged wagons, starting with the Skoda Octavia Scout, continuing with the fancier Volkswagen Golf and Passat Alltrack, and ending with the premium Audi A4 and A6 Allroad.

We’ve heard through the grape vine the German automotive conglomerate will add another member to that list at the beginning of the next decade when the Mission E Cross Turismo concept will morph into a production model.

More about the Cross Turismo:

In fact, Porsche strongly hinted during the showcar’s reveal earlier this week in Geneva that a road-going counterpart is on the agenda. Now, the company has released a collection of four videos providing us with a closer look at what will essentially become a more versatile version of Mission E sedan due to be launched at some point in 2019.

Unlike those jacked-up wagons powered by combustion engines, the Cross Turismo will be entirely electric, and since Porsche has made the promise the sedan will largely carry over the concept’s technical specifications, it should be the same story with its outdoorsy cousin. The two will share the same 800-volt architecture and an electric powertrain with a combined output of more than 600 horsepower (440 kilowatts).

In the case of the Cross Turismo, the zero-emissions system will have enough electric muscle for a sprint to 62 mph (100 kph) in less than 3.5 seconds and a run to 124 mph (200 kph) from a standstill in under 12 seconds. Thanks to fast-charging capabilities, the battery pack will provide enough juice for approximately 250 miles (400 kilometers) after roughly 15 minutes of charge. It’s important to mention that range is according to the soon-to-be-obsolete New European Driving Cycle (NEDC) and we all know that’s not exactly accurate. With the lithium-ion battery fully charged, Porsche is promising a range of more than 310 miles (500 km), also based on NEDC.

In regards to styling, we’re not expecting any major changes on the outside as the Mission E Cross Turismo doesn’t look all that concept-y. Perhaps bigger modifications will occur inside the cabin, but even that is likely similar to what the road-going car will have.

If the rumors will come true, you’ll be able to buy the electric lifted wagon starting with 2021.