BMW i3 Poised For 2nd Battery Upgrade. Hopefully A Naming Upgrade As Well... 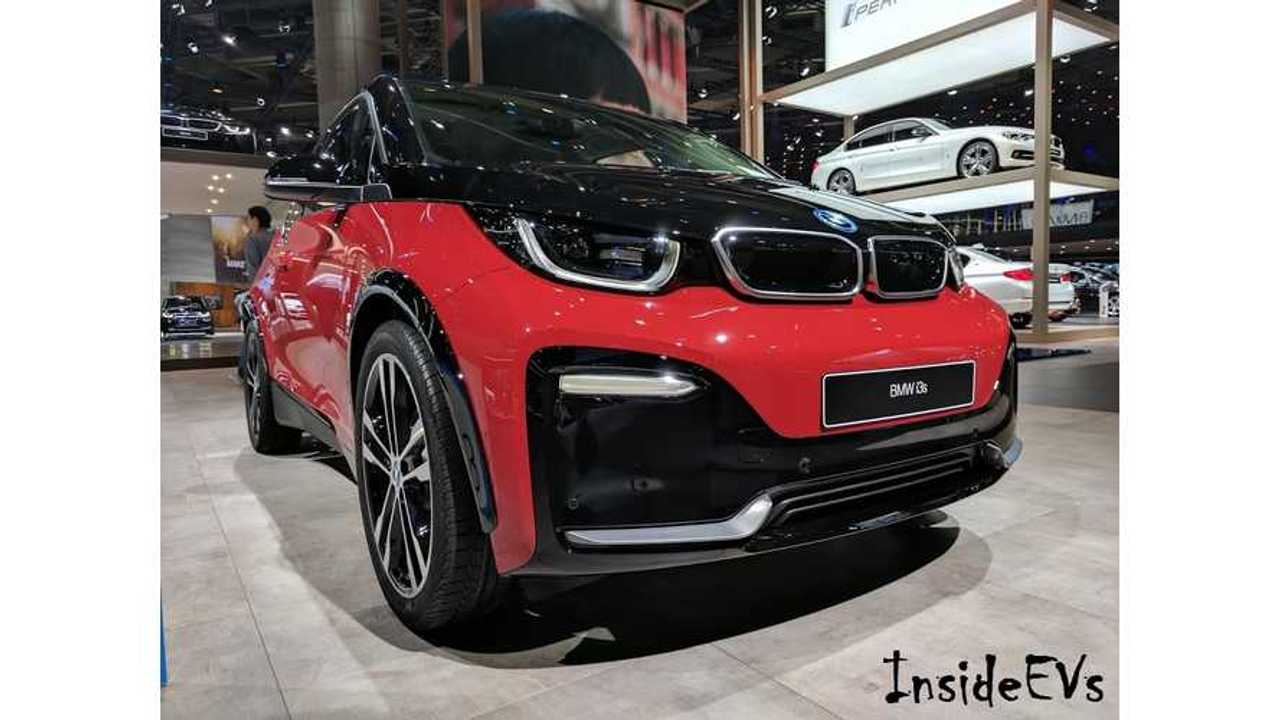 The 2018 BMW i3 Sport at the Frankfurt Auto Show. I had the opportunity to get an early preview of BMW's cars at IAA last week.

Fresh off of the Frankfurt introduction of the new BMW i3 exterior refresh and new i3 Sport for 2018, BMWBLOG is now reporting that they have confirmation that 2018 will also bring a new, larger battery option to the i3, albeit later in the year.

In mid-2016, BMW introduced the current 33.84 kWh battery which was an upgrade from the 21.6 kWh battery previously available. That bumped the i3 BEV’s 81 mile range to 114 miles per charge. The new battery, which is being introduced sometime later in 2018, is rumored to have a total capacity of 43.2 kWh and offer an EPA range rating of 150 – 155 miles per charge.

Customers that opt for the range extended version of the 43.2 kWh i3 will have about 230 miles of total driving range without the need to stop to recharge or refuel. The increase in all electric range will place the i3 in a virtual tie with the new Nissan LEAF for the second longest EV range behind the Chevy Bolt, in the “everybody but Tesla” class of electric vehicles. That is of course, until Nissan launches the 60 kWh LEAF, which isn’t expected to be available until the 2019 model year LEAF is out. Audi and Jaguar are also expected to introduce their respective long-range EVs sometime in 2018, and they will also leapfrog the i3 and LEAF in range.

One thing I’d like to see BMW do when they introduce the new battery is stop referring to it by the amount of amp hours for each cell. It’s a completely useless metric, and one that only causes further confusion among potential buyers. No other automaker uses the amp hour (Ah) metric to identify their battery packs. It would almost be as if they started to distinguish their internal combustion engines by the bore & stroke instead of the traditionally-used displacement in liters. It just makes no sense.

Every electric car manufacturer today refers to their battery packs by the total amount of energy it can hold in kilowatt hour (kWh). However, for some reason, when BMW introduced the new battery option for the 2017 i3, they decided to use the Ah metric, and called it the "i3 94 Ah" instead of just the BMW i3, and then listed the battery pack as 33 kWh. They never called the original i3 the "i3 60 Ah", so why change the designation when introducing the new pack?

Some critics claimed it was intentionally done to confuse buyers, and make the battery sound larger (94 is a bigger number than 33), and make it seem like it was comparable to Tesla’s battery offerings (75, 85, 90 & 100 kWh). Personally, I don’t agree with that assumption, I think it was just a case of BMW product planners wanting to distinguish the new battery as being better, and it was the first time they ever offered a new battery option, so they used the name that their supplier Samsung, uses without realizing the implications.

In any event, I’m happy to hear that BMW will be rolling out the second battery upgrade in two years. The i3 will then have used three different batteries in the first five years of availability, proving that BMW is continuously willing to improve the i3 as better battery technology becomes available.

An internet ad for a new BMW i3. There's no indication of how large the battery is, only the amp hour rating for each battery cell (the i3 has 96 cells), which is totally useless to the consumer.

My advice to BMW product planners: Drop the Ah designation, please. It’s only confusing your customers, your client advisers and in some cases even journalists writing about the i3. Simply do what every other EV maker does, and call it by the total size of the battery pack, in kilowatt hour. It’s easy, most buyers understand it, and client advisers won’t have to attempt to explain energy density, voltage, cells, and modules to every potential customer that asks how the battery compares to the batteries of the other EVs on the market. EV terminology can be confusing enough for first time buyers, lets not trip over the easy stuff...