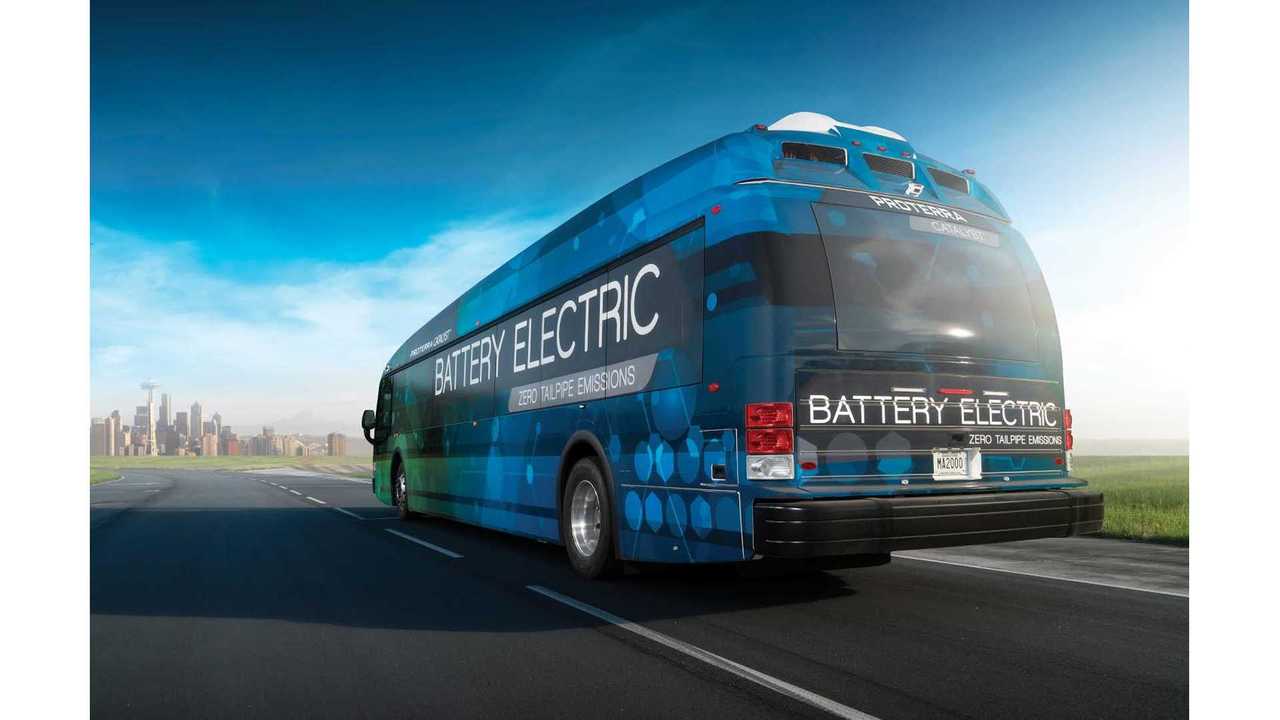 Early in September, at the Navistar Proving Grounds in New Carlisle, Indiana, Proterra set a new world record for the longest driving distance by an electric vehicle on a single charge - using its 40-foot Catalyst E2 electric bus - 1,101.2 miles (≈1,772 km).

The Proterra Catalyst E2 is equipped with the latest (and monstrous), 660 kWh battery pack; of which are supplied from LG Chem (because...well, of course they are).

The 1,100 mile range doesn't represent any real world expectation for energy consumption for the electric bus when in normal duty, but even at half of that in the city, Proterra is more than ready for the job.

It's also not the first time when Proterra set a new records:

“For our heavy-duty electric bus to break the previous world record of 1,013.76 miles — which was set by a light-duty passenger EV 46 times lighter than the Catalyst E2 max — is a major feat. This record achievement is a testament to Proterra’s purpose-built electric bus design, energy-dense batteries and efficient drivetrain.”

“Driven by the best cost savings-per-mile, we believe the business case for heavy-duty electric buses is superior to all other applications, and that the transit market will be the first to transition completely to battery-electric powered vehicles. Early electric bus adopters like our first customer, Foothill Transit, have paved the way for future heavy-duty applications, like motor coaches and commercial trucks. As we see incumbents and more companies enter the heavy-duty EV market, it has become very apparent that the future is all-electric, and the sun is setting on combustion engine technology.”

Separately, Proterra announced the co-development (again with LG Chem) of a battery cell that has been optimized to meet the unique performance and safety demands of the heavy-duty vehicle market.

The battery pack is rated at 160 Wh/kg and 260Wh/L - heavy-duty industry’s highest pack-level energy density according to Proterra.

The company's new battery facility is set to produce 500 MWh of battery packs annually. That's enough for more than a thousand vehicles (or more than 750 with top of the line 660 kWh option).

"The cell chemistry has been optimized for exceptional energy throughput capability, high charge rate acceptance, and industry-leading energy density. This joint development underscores the growing market demand for high-quality energy storage systems. According to Lux Research, batteries for transportation and grid storage are expected to surpass consumer electronics by next year and electric buses are cited as a primary market driver for this growing battery segment. Proterra’s new Burlingame battery production facility is currently ramping production to meet demand and can produce over 500 MWh of E2 battery packs on an annual basis."

"Last year, Proterra introduced the Catalyst® E2, the longest-range electric transit bus on the market. Capable of traveling up to 350 miles on a single charge, the Catalyst E2 meets the full daily mileage needs of nearly every U.S. mass transit route. For this program, LG Chem has developed an advanced battery cell to meet Proterra’s highest standard in terms of performance and safety. The E2 battery packs represent the heavy-duty industry’s highest pack-level energy density at 160 Wh/kg and 260Wh/L. Made from lightweight ballistic-grade materials to withstand the toughest conditions, Proterra’s standard E2 pack was designed from the ground up with an emphasis on safety, durability and performance."

“Between Proterra’s demonstrated leadership in the heavy-duty electric vehicle industry, and the company’s battery expertise, Proterra has been a strong partner for LG Chem to co-develop a battery cell with for this important market. It is our commitment to be at the leading edge of designing and manufacturing advanced batteries to meet the increasing global demand coming from the electric transportation sector.”

“Safety is paramount to our battery design philosophy. We have implemented redundant layers of passive and active safety features into the architecture of the battery in concert with the vehicle itself. Deploying energy storage systems of this scale has led us down a technology path to new and advanced safety features..”