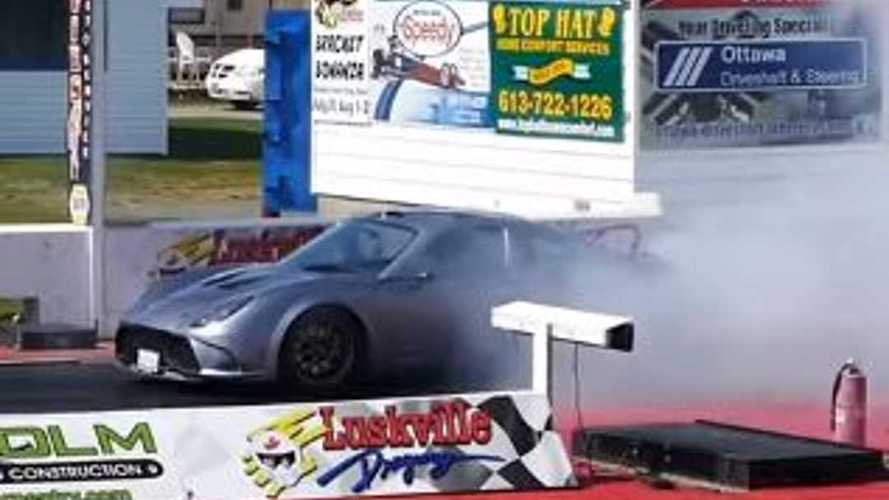 A year ago, we watched in giddy awe as this Factory Five 818 Coupe kit car launched down the length of a quarter-mile strip in an eye-opening 10.155 seconds at 126.37 miles per hour. At the time, it boasted a Tesla motor and inverter salvaged from a Model S P85, drawing power from a pair of Chevy Volt batteries.  Now, it's been back to the track and the Canadian crew behind it have just shown the world what hot rodders can do in this new age of electric performance.

This latest run sees them knocking some tenths from that original time and getting into the nine's: 9.86 seconds at 129 mph, to be exact. It may not seem like much improvement, but at these levels of performance, gains are not easy to come by. It also came after driving 35 km (22 miles) to get to the sticky asphalt at Luskville Dragway.

The hardware was the same as last year's, but with one important difference: the firmware for the inverter "improved," allowing it to pump 400 kW (530 horsepower) into the motor. Turns out the outfit that built the car, EV Controls, also built the system that allows them (or anyone who buys a controller setup from them) to turn up the heat.

Besides the video above, we have another shot from inside the 818 that gives a better sense of what it feels like to shoot down the track under that kind of acceleration. Since the two vids are kind of short, we've also thrown in a bonus bit of footage below featuring one of their customers road racing their Tesla/Kia Soul EV-powered Cobra through a field of assorted vehicles at Mission Raceway Park in Mission, British Columbia. The Cobra doesn't last the whole race, but the half dozen laps of reeling in the field makes for a very satisfying watch. Enjoy!