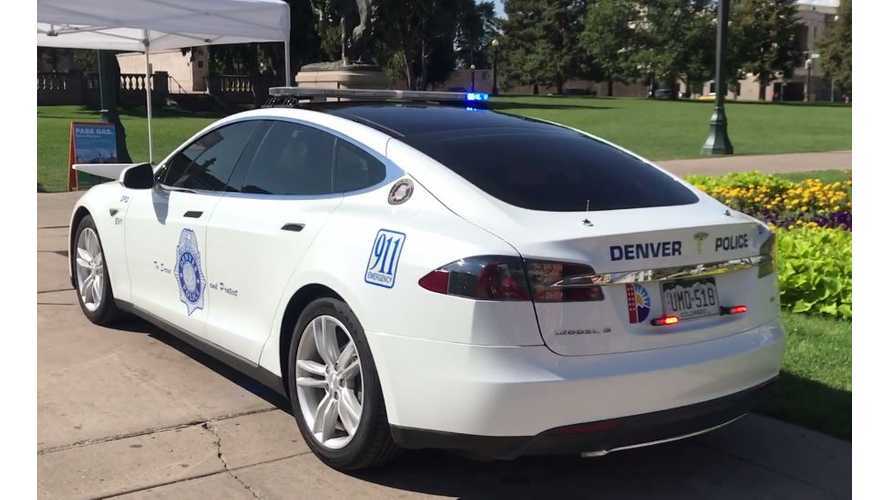 The Tesla Model S seems like a great choice for a police vehicle due to acceleration, state-of-the-art technology, and passenger and cargo space. However, it's a bit pricey.

We previously reported about the Los Angeles Police Department testing the Tesla Model S as a high-speed pursuit car and Scotland yard considering Tesla vehicles for police and emergency use. Now, the Denver Police Department is following suit and already has a functional Model S police cruiser.

Redditor Modes22 got a close-up look at the department's new ride and posted a video on Reddit:

According to Electrek, even though the Denver PD set the car up with a siren and lights, it will likely only be used for special events and community outreach.

“We have several cars that we use for community outreach and events (vintage police cars, etc.), and the pictured Tesla will be used for that same purpose.”

This makes more sense, however, since the price is significant compared to vehicles traditionally used as police cars. Perhaps stations having one as a high-speed car or a "special ops" type addition makes sense, but we're pretty certain that some people may complain if a department were to replace all cars with Tesla vehicles. However, down the road, the Tesla Model 3 may be a viable option.

As battery costs continue to drop and EVs reach price parity with ICE cars, it will only make sense to see government agencies make the switch. This is especially true because it will save a significant amount of money currently used for fuel and vehicle maintenance. The longevity of EVs is also very attractive for these type of positions. Future EV fleets could last for many more years than current fleets, saving municipalities even more money. Additionally, having access to the latest, greatest technology, and continual over-the-air updates is paramount.