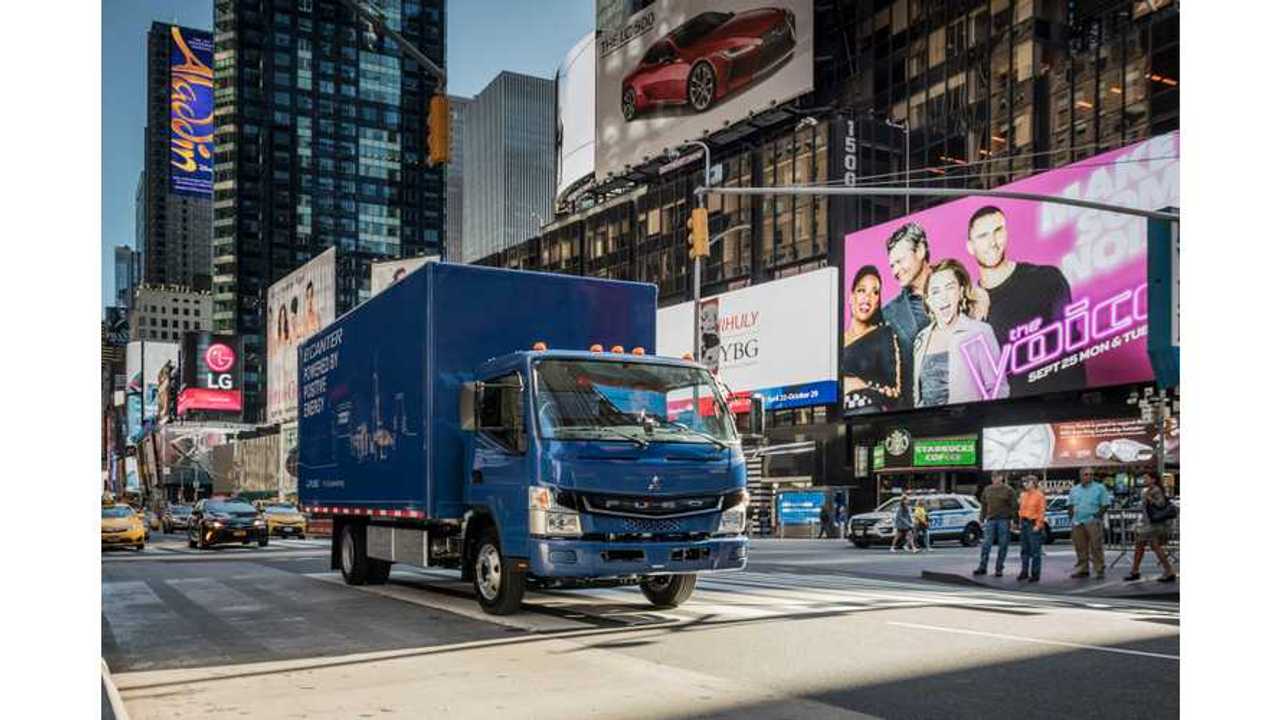 The first electric truck from FUSO entered production in Portugal and Japan earlier this year, however the market introduction will measured, as only ~500 units are likely to be delivered over the first two years.

For now, the FUSO eCanter is only offered under a two-year/lease-only deal, as Daimler expects to introduce a new version with better batteries relatively soon.

In Japan, mega-convenience retailer Seven-Eleven will be operating 25 units.

After the initial two-year start-up period, it's expected that large scale production will begin in 2019.

The FUSO eCanter is equipped with six 13.8 kWh modules for total of 82.8 kWh. Daimler believes that such a battery is good for up to 100 km (62 miles) during a heavy work rotation - with two to three and a half tons of cargo.

"Mitsubishi Fuso Truck and Bus Corporation (MFTBC), part of Daimler Trucks - the global market leader with truck brands like Freightliner, Mercedes-Benz and FUSO - today celebrated the global launch of the FUSO eCanter in New York City. The FUSO eCanter is the world’s first series-produced all-electric light-duty truck and will be delivered to customers starting this year in the US, Europe and Japan. MFTBC is planning to deliver 500 units of this generation to customers within the next two years. Larger scale production is intended to start in 2019."

"The all-electric light-duty truck is MFTBC’s answer to the public’s need for a zero-emission, zero-noise truck for continuously increasing inner-city distribution. In addition to being an eco-friendly vehicle, it is cost-efficient and economical for users, as already proved within customer tests in Europe. The FUSO eCanter has a range of 100 kilometers and a load capacity up to three and a half tons – depending on body and usage. The vehicle´s electric powertrain contains six high voltage lithium ion battery packs with 420 V and 13.8 kWh each. In comparison with a conventional diesel truck, it offers savings up to 1,000 Euro per 10,000 kilometers on operating costs."

“In times, when everybody is talking about electric trucks, we are the first to actually commercialize a series produced all-electric truck. Having a long history in alternative drivetrains, we are proud to step into this new era. Our FUSO eCanter comes with years of customer testing, and the assurance of parts, services, and warranty through our global FUSO dealership network.”

“Our new FUSO eCanter now addresses the increasing global demand for products to meet and exceed high CO2 emission standards. It offers an attractive and cost-effective alternative to combustion engines and makes electric trucks key to the future of inner city distribution”,

“At UPS, we constantly evaluate and deploy advanced technologies that enable sustainable, innovative solutions for our fleet. Electric trucks make our fleet both cleaner and quieter, adding to our already more than 8,500 alternative drivetrain vehicles in service today. We have a long-standing global relationship with Daimler, and we welcome the opportunity to trial the Fuso eCanter as UPS continues to realize the benefits of electric trucks.”