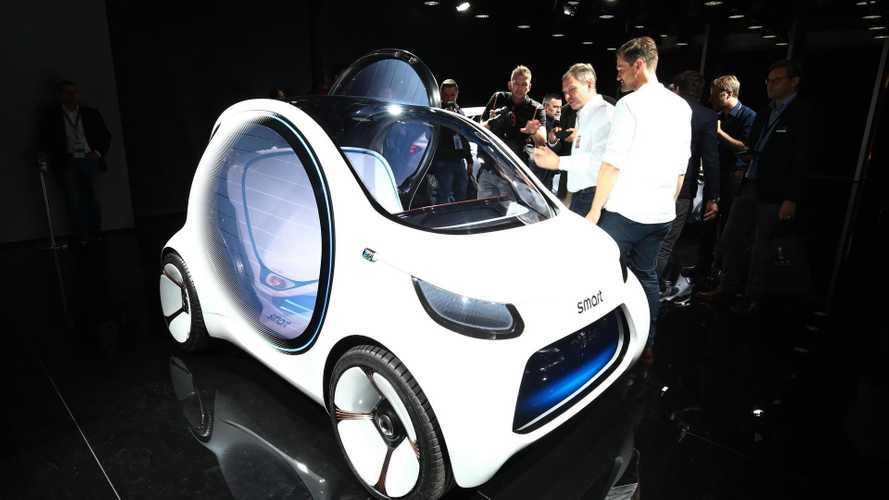 Smart used this year’s Frankfurt Motor Show to look forward to the brand’s future with a concept, and to celebrate the firm’s past with an anniversary special edition.

The company’s Vision EQ ForTwo concept points to a prospective transition into an autonomous ride-sharing firm. The little vehicle adapts the firm’s modern styling into a more rounded futuristic shape. Rather than conventional doors, they rotate open. Traditional lights aren’t necessary because the concept is a purely autonomous vehicle; instead panels on the front and rear display messages to other people on the road.

Inside, there’re no pedals or steering wheel, which maximizes cabin space. Instead, a digital panel extends across the dashboard and lets occupants select where the vehicle should go.

Smart imagines the Vision EQ ForTwo as driving autonomously around cities in 2030. It would pack a 30 kilowatt-hour battery and inductive charging would allow for topping up the system without plugging in.

While a model like the Vision EQ ForTwo is decades away, you can get the Fortwo Brabus 15th Anniversary Edition of the Coupe and Cabrio. The models come in Anniversary Silver exterior paint and Espresso Brown leather. Limited to a total of 150 units, the Brabus 15th Anniversary Edition is available with the 89-horsepower (66-kilowatt) and 107-hp (80-kW) turbocharged engines, plus the 80-hp (60-kW) electric model of the coupe. The first units arrive around the end of the year.

Smart also updates the rest of its range with a few other additions. Active Brake Assist is now optional, and there’s Siri voice controls with the Smart Audio-System and Media-System packages. The electric models with the Cool & Media package can show nearby charging locations on the infotainment system. In addition, the Perfect Equipment Line option package includes fake leather and a mix of brown and black upholstery.