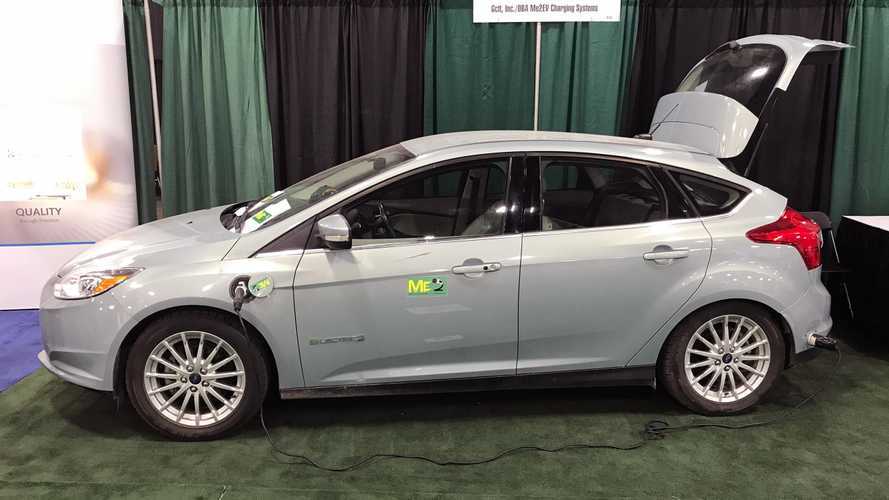 What's an extra bank of batteries among friends?

There have been any number of creative ways to extend the range of an electric vehicle, from little trailers that either burn gasoline or have an extra battery pack so that you can charge up even when you're nowhere near an electric outlet. At The Battery Show in Novi this week, James Dierickx is showing off yet another option: stuffing your trunk full of lead acid batteries that can add 50 or 60 miles or range to his 2013 Ford Focus Electric. If you're wondering why you would want to do this, the answer lies in Iowa and the Persian Gulf.

Dierickx lives in Iowa, where he told InsideEVs that public charging stations are few and far between. He is also an Army veteran and served in the first Gulf War. That's where, while breathing in the smoke from burning oil fields, his vocal chords were damaged. It's also where he says he got his PTSD, which was triggered when the terrorist attacks of September 11, 2001 happened and he decided he had to do something.

He soon settled on electric vehicles as the way to make a difference, and said today that, "Every electric car we get out there, it's one less barrel of oil we have to import." His mantra is easy to remember. "Defund oil, defund terrorism," he said. "It's as simple as that. I want to do everything I can to make electric vehicles more reliable and more useful."

Which brings us to the ME2 L-Loop. Dierickx's idea is that since his Focus Electric gets him around 60 miles on a full charge (we should note the EPA rates the Focus EV at 76 miles), he built a bank of batteries that fit in the trunk and can be used to charge up the car's built-in lithium-ion battery when it's parked.

So, he drives his 60 miles, can't find a charging station, but then simply plugs the back of the car into the front and in two to three hours, he has a full battery again. No outlet required. Of course, he does have to remember to charge up both packs when he has the opportunity, but for his specific situation, this is an elegant solution. Dierickx said that he wants to make a pack that fits into a first-gen Nissan Leaf, too, so that drivers of that aging vehicle will be able to get more use out of their car. He said expects his pack will cost between $4,800 and $5,200 for customers to buy for their EVs.

That's not all that Dierickx wants to do, though. He said he is planning on figuring out how to make dynamic charging work in the near future. With this option, when the rear pack senses that the lithium ion batteries are about out of juice, it'll start charging the main battery.  Dierickx said this will be, "a game-changer for older electric vehicles."

Dierickx is also talking about an extendable wheel that will come down from the rear of the car and harvest kinetic energy from the car's forward momentum and put it in the lead acid pack, but details are scarce right now, so we'll leave that idea alone (without comment) for now.