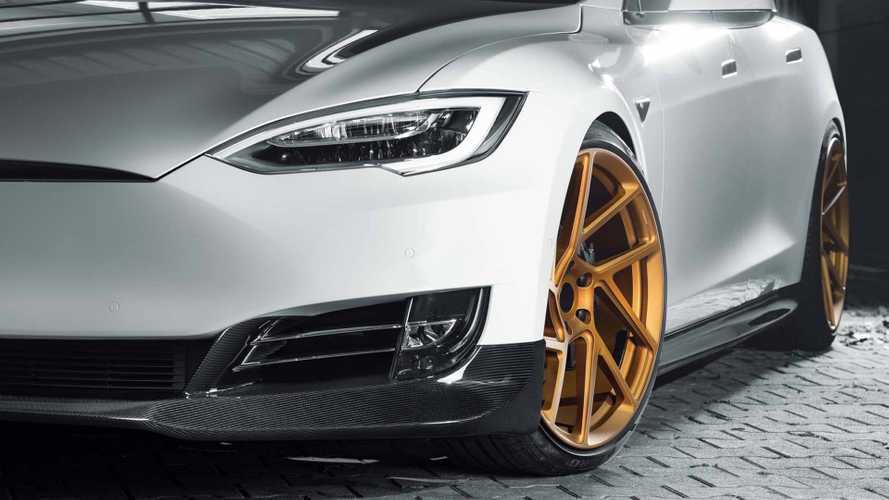 A little bit of carbon fiber and colorful wheels goes a long way.

It’s not often we see tuners sink their wrenches into the Tesla Model S, so when one comes along, we tend to notice. That holds especially true for German tuning company Novitec, which tends to be a bit more conservative than most when it comes to add-ons and color combinations. Sometimes, over-the-top wings and crazy air scoops are all well and good, but when it comes to Tesla’s super sedan, we’ve found that subtlety is usually the best approach.

That design philosophy is in full effect with Novitec’s take on the Model S, and the changes are simply superb. To help the visuals, the company adds a bare carbon fiber body kit that includes a front lip spoiler, rocker panels on the sides, and a rear diffuser down low with the smallest of spoilers on the deck lid. It is properly subtle while adding just enough aggression to make the Tesla really stand out.

That’s further accomplished with a set of Novitec NV2 21-inch wheels, designed specifically for the Model S in conjunction with American wheel manufacturer Vossen. Ordinarily we’d say Subaru is the only brand that can pull off gold wheels, but these rims look just fine beneath the Tesla. If, however, you’re not a fan of gold, Novitec says theses wheels are available in no less than 72 different colors. Between that and a range of custom interior choices, it shouldn’t be hard to for Tesla owners to create a truly unique car.

Aesthetics aren’t the only thing Novitec addresses on the Model S. The car rides on a coilover suspension setup that can vary the ride height by 40 millimeters while also offering three different damper settings, and it can all be controlled inside the car with the push of a button. When it comes to stopping, Novitec also offers a carbon-ceramic brake upgrade available in two different formats. Power is left alone because let’s face it – how does a company improve on a car that can already hit 60 mph in around two and a half seconds?

There’s nothing wrong with driving a flamboyant supercar, but there’s certainly a place for subtle touches in the performance world, too.