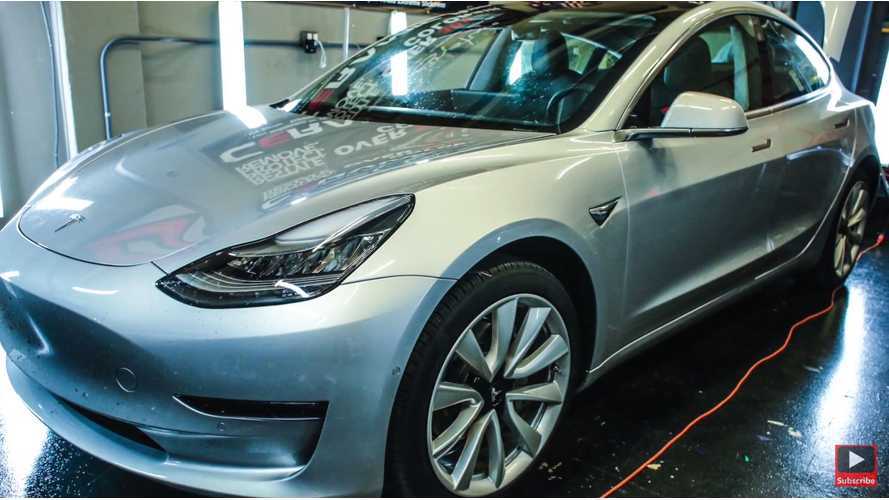 Perhaps the Tesla Model 3 will eventually come with the option of 20-inch Sport wheels?

The current Model 3 (long range, single motor) comes standard with 18-inch Aero wheels. The only other option is to spend $1,500 to upgrade to 19-inch Sport wheels (although, as another option, you can easily remove the Aero cap). Some people believed that earlier Model 3's may have had 20-inch wheels, but we have no proof of this. According to Teslarati, 20-inch wheels were on the car at its official reveal in March of 2016 (as shown above).

Since then, the only 20-inch wheels out there would be those that people (likely Tesla employees) have put on their cars after the fact. Ryan McCaffrey, who's known in Tesla circles for being the guy that hosts Ride the Lightning (an unofficial Tesla podcast), has seen such tires and is enamored with them. He was able to connect with CEO Elon Musk in a recent Tweet asking if 20-inch Sport wheels are coming. Musk didn't answer that question, but he agreed that they look better on the car.

@elonmusk Elon, are 20-inch Sport wheels coming for Model 3? They've been spotted on a couple of Tesla-owned Model 3s, and a set was just sold on eBay. Seems imminent, but would love confirmation! 20s fill out the wheel wells on Model 3 so much better than 19s!

Not long after Musk's response, he deleted the Tweet. This could have happened for many different reasons. Maybe 20-inch Sport wheels are supposed to be a surprise? Perhaps they're never going to be an option? Musk is busy and didn't want to deal with the floodgate or eventual replies?

It's highly likely that at some point there will be a 20-inch Sport wheel option for the Model 3. As Teslarati points out, the prototype wore 235/35/ZR20 tires. It would make perfect sense for these tires to ride on 20-inch rims in the dual-motor, performance spec Model 3. If that's the case, one would think that Tesla would be smart to offer them as an upgrade on any trim once that day comes. Until then, it probably makes more sense for the automaker to entice people to opt for the 19s.