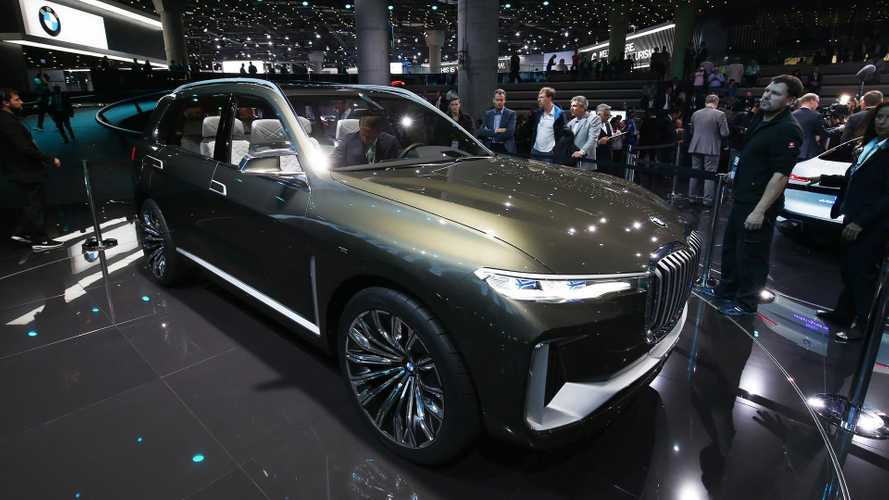 Bigger is better in the case of the BMW X7 concept.

Big and bold might be the two best words to describe the new BMW Concept X7 iPerformance. Making its online debut just a few days ago, the large-and-in-charge SUV is making its first public debut at the Frankfurt Motor Show, alongside the new M5 sedan – and we have live images to prove it.

Immediate reactions to the X7 plug-in are one of love or hate, as the concept mixes a chiseled exterior with a luxurious three-row interior surrounded by plenty of glass.

The angular fascia is centered by an imposing set of kidney grilles, LED headlights, and massive diffusers at either corner. There’s also a healthy amount of chrome, prominently outlining features like the fender gill, side sills, and windows.

Out back, a set of sharp LED taillights give the upright rear a more futuristic feel. L-shaped vents behind the fenders add some much-needed angular lines, and a large rear window opens up the cabin to the world, aided by an equally daunting glass roof and Y-shaped divider.

Inside the BMw X7 iPerformance

In the cabin, the concept has room enough for six passengers sitting along three different rows. A digital infotainment up front system features a large central screen and a digital dash, accented by various touch screen surfaces and a central control dial located near the shifter. Second row passengers also get a touchscreen system, allowing them to queue up music on the stereo, and stream videos.

Power comes courtesy of a hybrid plug-in powertrain paired to a turbocharged engine. The new iPerformance designation signifies the advanced powertrain unit, similar to the i3 and i8 before it. Though it’s just a concept, the production X7 will make its debut in 2018, and will be built at BMW’s U.S. plant in Spartanburg, South Carolina.

As for what that plug-in powertrain can do?  BMW has yet to say, however we think it is likely (for obvious reasons) that the 740e iPerformance set-up has simply been duplicated here.  Meaning a 9.2 kWh battery lives inside the X7, likely good for a real world/EPA driving range of about 20-22 km (~12-14 miles).

Below: Gallery of the BMW X7 iPerformance