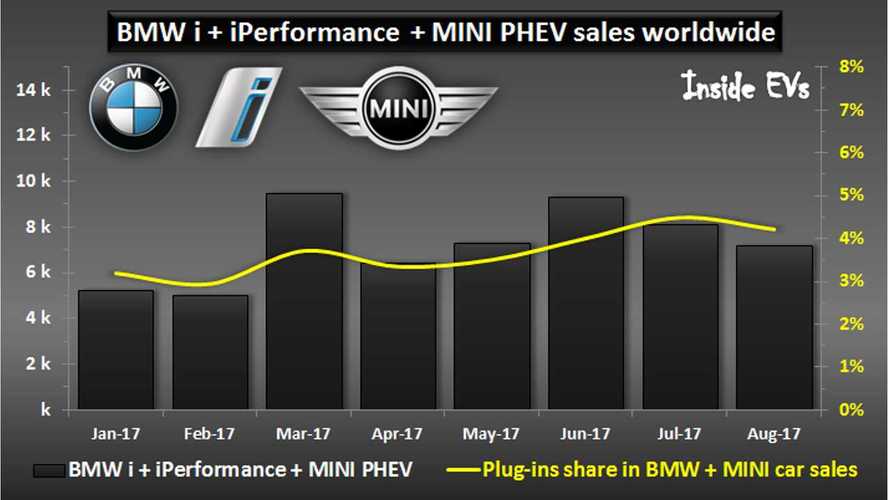 The BMW Group seems to be satisfied with the sales of its new plug-in models this year; specifically, the 530e iPerformance which noted more than 1,000 sales last month (more than a third in the US), taking over 6% of total 5 series sales (ex-China), while the new MINI Countryman PHEV sold nearly 500 units, representing 9% of Countryman sales - much higher than originally anticipated.

In total, combined sales of BMW i, BMW iPerformance and MINI Electric plug-ins for August stood at 7,184 deliveries which was 26.8% more than year ago.

Market share of plug-ins inside the group amounted to a decent 4.23%.

With four months to go, sales would need to exceed 10,500 on average, a result which BMW has yet to achieve for any month in its history - but then again, historically the last 4 months of the year have shown significant gains for BMW plug-ins.  Coin flip anyone?

"Sales of the BMW Group’s unrivalled range of electrified vehicles continue to grow strongly. A total of 57,895 BMW i, BMW iPerformance and electrified MINI vehicles have been delivered to customers around the world since the start of the year, an increase of 67.0%.

With a total of nine electrified automobiles on sale today, ranging from the BMW i3 (combined fuel consumption in the EU test cycle 0,0 l/100 km; combined electricity consumption 13,1 kWh/100 km; combined CO2 emissions 0 g/km) through the MINI Countryman (fuel consumption in the EU test cycle: 2.3 - 2.1 litres/100 km, electricity consumption 14 kWh/100 km, CO2 emissions: 52 - 49 g/km) to the BMW 7 Series, the BMW Group has an 11% share of the global electrified market, far ahead of any other traditional car maker.