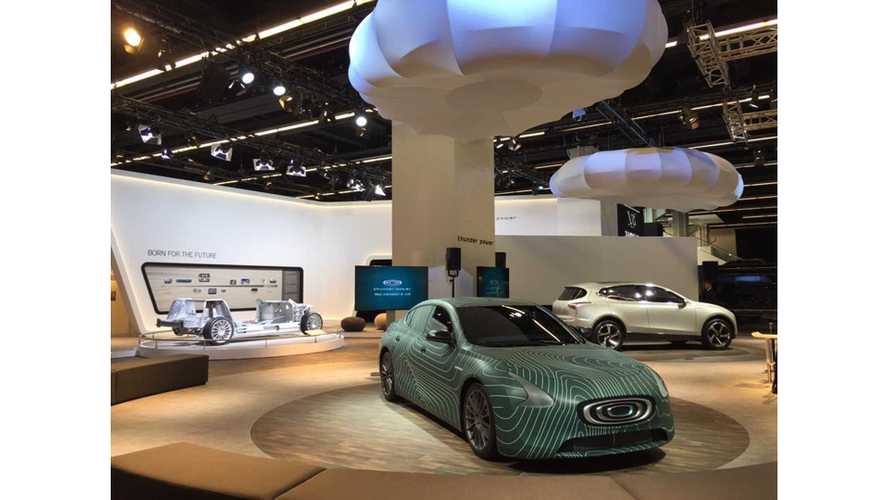 Thunder Power was back at the Frankfurt Motor Show with its electric Sedan, this time dressed in full test-camouflage (we guess that is what that look is), after the concept debuted in 2015.

There has been development on the project's progress over the past two years - but less than expected, as the market launch is now delayed to 2019 (it was originally planned for 2017/2018).

The Thunder Power Sedan is to be made available in few versions, just like Tesla Model S. There will be also be a Limited Edition.

Here is some spec data:

Beside the sedan, Thunder Power intends to also offer an SUV, which was presented at the show in concept version (see gallery below). The SUV is scheduled for 2020.

Both the SUV and Sedan will be based on the same rolling chassis.

About the Thunder Power EVs:

Taking a break from testing duties to make a guest appearance in Frankfurt, TP-01 is the first development prototype produced using pre-series materials and components. Its primary function is testing, development and validation of dynamic & battery performance. With mass production scheduled in under two years, the engineering process is in full swing. Since its debut at IAA 2015, the Thunder Power Sedan has been developed from the original concept vehicle with noticeable styling and aerodynamic enhancements to both the front and rear of the car giving a more mature and striking on-road presence.

Designed by Thunder Power’s own in-house design team based in Milan, Thunder Power SUV “Future Vision” alpha prototype represents the shape of things to come. Benefitting from the advantages of the modular design of the dedicated platform, the SUV is than natural extension of the range to follow in the footsteps of the Sedan. A unique electrical motor and battery configuration offers unmatched levels of freedom in design – which the company refers to as Intelligent Packaging. Intelligent Packaging maximizes interior space, especially in the rear, with none of the traditional compromises. It allows a center of gravity comparable to that of a sedan, significantly increasing dynamic capabilities and driving pleasure whilst retaining all the advantages of the modern off road vehicle. And it enhances aerodynamics by optimizing air intakes, underbody and overall surface-generated drag.

Engineered in Italy, the race-inspired multi-link suspension features open lower triangle architecture and a closed top triangle at the front, providing maximum flexibility for the design of the cabin. At the rear, a lower wishbone and top connecting link rod eliminate the need for the top anchor point normally found in a double triangle suspension. Each component has been manufactured using hot forging technology for optimum strength. Together, the result is a near-perfect balance of driving dynamics: high levels of comfort with the firm suspension that delivers performance car levels of ride and handling.

To celebrate the launch of the Thunder Power premium electric vehicle collection, a special edition coupe is now being prepared for release. Strictly limited to just 488 cars globally, the elegant coupe features a 4WD drivetrain with torque-vectoring and is powered by a 488 kW electric powertrain. A refined and spacious interior will be sculpted from the finest Italian leather, customized to each buyer’s personal taste. And every model will have its unique serial number laser-inscribed plaque installed, making each a true collectible.

Thunder Power recently opened their brand new manufacturing centre in Ganzhou, in south-eastern China’s Jiangxi province. A multibillion RMB joint venture with the Gannan state industrial fund, the facility provides an emphatic demonstration of the company’s long term commitment to China and the wider Asia Pacific region. In Europe, meanwhile, Chairman & CEO Wellen Sham has signed an agreement with Mr Jordi Baiget, the Catalan Minister for Business and Knowledge for the construction of a second manufacturing site based in Catalonia, Spain. Thunder Power's affiliate company Electric Power Technology has also recently come to an agreement with the Taoyuan City government to build a new battery pack manufacturing facility in Taiwan.