Porsche: 60% Of Panamera Deliveries In Europe Are Plug-In Hybrid Variant

The all new plug-in hybrid Porsche Panamera, introduced in Europe in June, has outsold the conventional version right from the start.

It seems consumers don't want an pure internal combustion engine offering - if there's a reasonably priced PHEV option to choose from, at least at the high end of the automotive spectrum.

Porsche has revealed that around 60% of new Panamera models were of plug-in hybrid variety, with some countries even reaching 90% of sales:

The all-electric range of the plug-in hybrid Panamera is up to 50 km (31 miles) on the NEDC measuring system (up to 24 miles/39 km on the more realitic EPA system). The Panamera Turbo S E-Hybrid is equipped with a four-liter V8 engine and an electric motor generating a system power of 680 hp.

Albrecht Reimold, Member of the Executive Board for Production and Logistics at Porsche AG said:

“Electromobility is the future”

“Porsche and electromobility are a perfect match.”

Porsche adds that the next step is the upcoming all-electric Mission E. The German manufacturer already is working on derivatives of the Mission E. There will be new models too, developed on a joint platform with Audi.

"The next step is the Mission E: Preparations are underway in Zuffenhausen for the production of Porsche’s first purely battery-powered sports car. The vehicle will have a range of 500 kilometres and will sprint from 0 to 100 km/h in less than 3.5 seconds. Using fast charging, it will be possible to charge its battery by 80 per cent in just 15 minutes. “It is the most ambitious project we have ever taken on”, says Member of the Executive Board for Production and Logistics, Reimold.

“Sustainability is the foundation of our company management. Resource-efficient production methods are of the highest priority for Porsche, and are also being factored into the restructuring of our traditional plant in Zuffenhausen for the production of the first purely electric Porsche”, explains Albrecht Reimold. By 2019, there will be a brand new plant, a factory within the factory. “Our goal is to achieve CO2-neutral production. We are completely on schedule. The Mission E will be on the market by the end of the decade.”

Porsche is investing around one billion euro in the Mission E project, around 700 million euro of which will go towards the production facilities at the headquarters in Zuffenhausen. A new paint shop, dedicated assembly area and an 800-metre-long conveyor bridge for transporting the painted bodies and drive units to the final assembly area are being constructed there. The existing engine plant is being expanded to manufacture electric drives. The existing body construction will also be expanded. A total of 1,200 new jobs are being created. There will also be additional investments related to this, for example in the Weissach development centre.

Planning for the years ahead is now underway. “We are already thinking about derivatives of the Mission E”, says Member of the Executive Board for Production and Logistics, Reimold. “We are also planning additional purely electric vehicles and investigating relevant segments. We are working with Audi on a joint electric vehicle architecture for the long-term future.”

The Porsche Engineering subsidiary also developed a fast charging system. With a voltage of 800 volts and a charging rate of up to 320 kW, “Porsche Turbo Charging” ensures high charging performance and short charging times even in a heterogeneous network infrastructure.

Furthermore, Porsche and Audi are representing the Volkswagen Group in IONITY, a joint venture with the BMW Group, Daimler AG and Ford Motor Company. The goal of this venture is to construct and operate 400 powerful fast charging stations along the major European traffic routes by 2020. Construction of the first stations will get underway before the end of the year. In addition to IONITY, the Porsche dealer network is becoming part of a nationwide rapid charging infrastructure, which will gradually be equipped with 800-volt charging technology. The expansion of Porsche’s internal charging infrastructure for electric vehicles is also in full swing: 66 charging pedestals with 109 charging points will be put into operation as part of the initial phase of construction at the sports car manufacturer’s sites."

And here is the Porsche Panamera S E-Hybrid at the Los Angeles Auto Show: 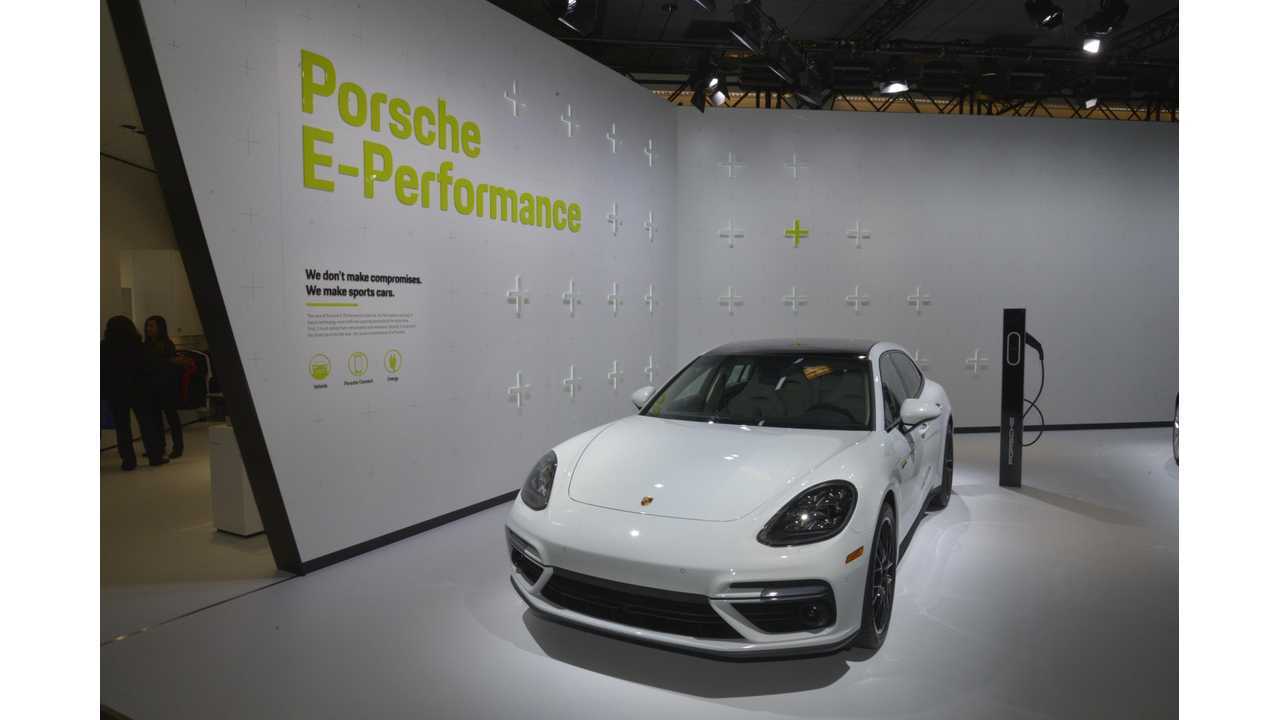