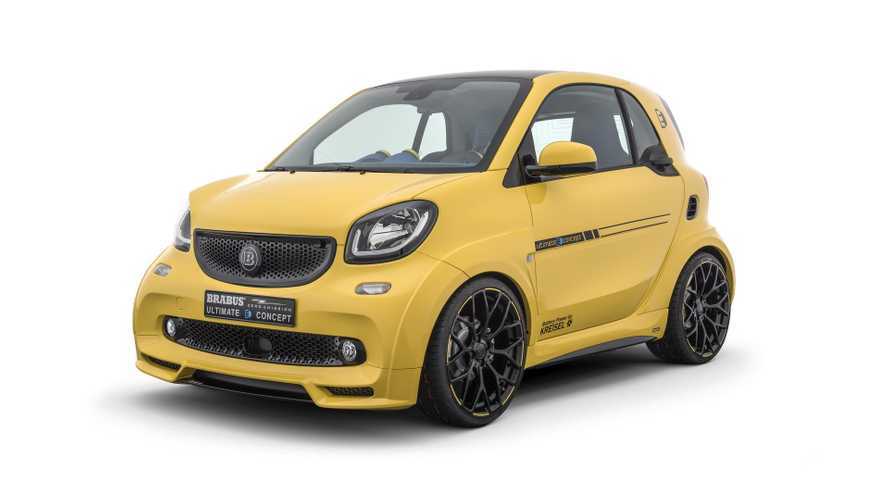 The Smart ForTwo is far from being the most exciting car in the world, but hand it over to the talented folks at Brabus and they’ll make it considerably more interesting. Case in point, the Ultimate E Concept debuting today at the Frankfurt Motor Show is not your typical city car. For starters, it started out in life as a regular ForTwo fitted with a combustion engine and then it received a fully electric powertrain developed in collaboration with Kreisel Electric.

The ForTwo concept is equipped with an electric motor that develops an impressive 201 horsepower (150 kilowatts) and 258 pound-feet (350 Newton-meters) of torque. With so much power having to carry around just 2,392 pounds (1,085 kilograms), it’s no wonder the Ultimate E Concept is seriously quick and fast. 0-62 mph (0-100 kph) takes 4.5 seconds before reaching a top speed of 112 mph (180 kph). The maximum velocity might not seem very impressive, but let’s keep in mind we’re dealing with a tiny electric car.

Installed in the vehicle’s floor is the lithium-ion battery pack with a 22-kWh capacity and enough juice for 100 miles (160 kilometers) in the New European Driving Cycle (given the EPA/real world rating of just 58 miles for the current 17.6 kWh pack, we think an expectation for about 80 miles/130 driving is more reasonable).

If you’re in a hurry, using a wall box charger for half an hour will charge the battery to an 80 percent level.

Sitting on 18-inch lightweight forged wheels, the zero-emissions Smart has received an eye-catching yellow paint on its wide aerodynamic body while on the inside a similar shade is nicely combined with the blue theme applied onto the seats, dashboard, and door panels.

Brabus says it’s currently performing road tests with the Ultimate E Concept and will show it at IAA to find out whether there will be enough demand to take into consideration a production version in a limited series.