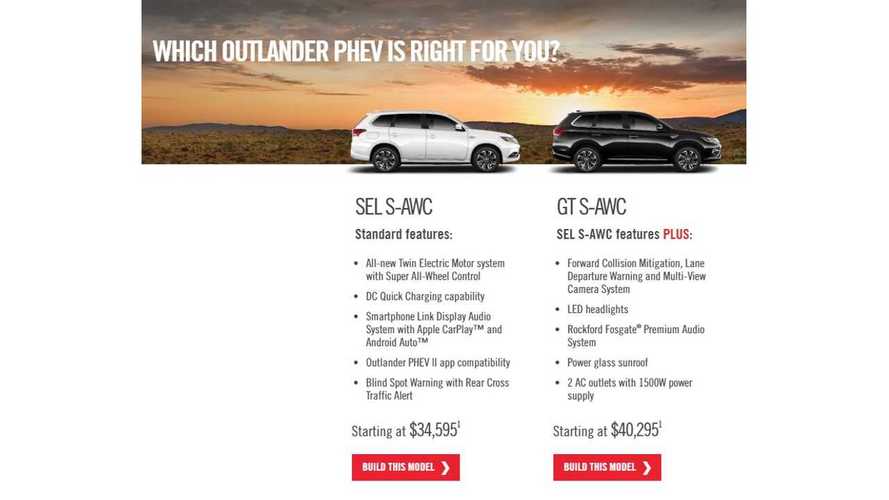 The Mitsubishi Outlander PHEV is coming to the U.S. soon.

Yes, we've all heard that statement multiple times in the past (we count about ~seven times) and have grown hesitant to believe it, but now it seems like it is really happening.

Just the other day, Mitsubishi's U.S. website listed the Outlander PHEV among its offerings. This critical step that comes before selling the vehicle has never happened in the past, so perhaps we are to believe it's actually coming this time around.

Previously we reported on U.S. pricing for the Mitsubishi Outlander PHEV:

“The world’s first plug-in hybrid crossover and the best-selling PHEV in Europe is coming to America. The all-new 2018 Mitsubishi Outlander Plug-in Hybrid Electric Vehicle (PHEV) will arrive in dealerships in December 2017 starting at the MSRP of $34,595.”

But now there's more info available based on trim:

We maxed out (build your own here) an Outlander PHEV and it still checks in at a reasonable price of $47,855:

We've gathered a whole slew of screen grabs from the Outlander PHEV U.S. page for your enjoyment and for proof it's listed (you know, just in case it vanishes in the next couple of days).

While there's still no official EPA data on the vehicle, we're hopeful that gets released soon. If it does, then this time Mitsubishi will actually make good on it's promise from almost half a decade ago.

Here are EPA estimates, though they are just that...estimates, provided by the automaker.