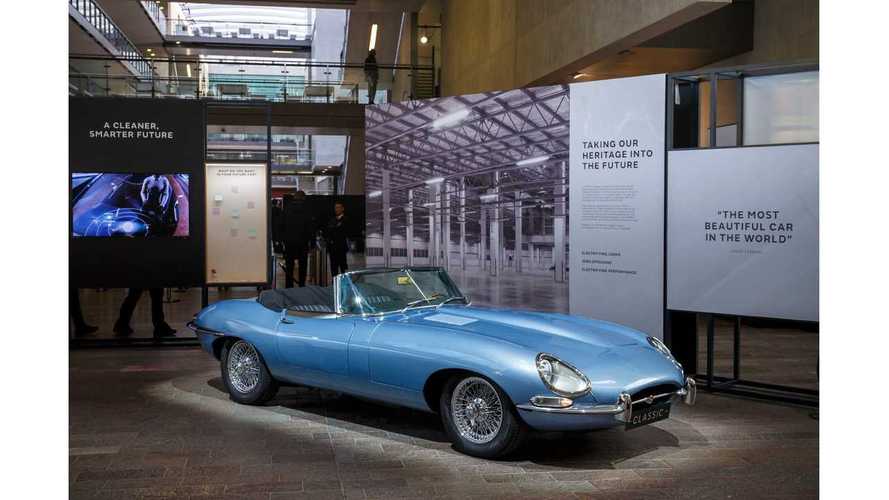 Here's your first up close and personal look at the stunning Jaguar E-Type Zero Electric Concept.

Just a few days ago, Jaguar shocked us with the reveal of a converted E-Type called the E-Type Zero Electric Concept.

Widely regarded as the most visually appealing car ever made, the E-Type goes fully electric in this rendition.

Jaguar has only loose plans at this point in time in regards to making such a conversion reality, but still it's simply gorgeous to gaze upon.

Jaguar views this conversion as a possible way to keep classic cars on the roads as emissions grow ever so stringent.

As we previously stated in our reveal article:

" has replaced the classic Jaguar six-cylinder engine with batteries, an electric motor, and all the necessary control systems. But otherwise, the restored Series 1.5 E-Type from 1968 has been left well alone – suspension is identical, as are the brakes, even the driveshafts that send the electric-sourced power to the rear wheels.

JLR Classic director Tim Hannig says the conversion could be offered by the works division, maintaining as much originality as possible. It would also be fully reversible, for added provenance. Although the concept E-Type EV has an interior with electronic instruments and a central touchscreen, even the original E-Type clocks and toggles could be retained. “You’d only need to swap the rev counter for an electronic battery meter,” he told us.

On stage at the Jaguar Land Rover Tech Fest in London, alongside the E-Type EV, you'll see what appears to be a production-ready Jaguar I-Pace (production details and technical specs here), as well as a very forward-looking concept from Jaguar called the Jaguar Future-Pace.

Additional details on E-Type Zero, as well as video and images of both the Jaguar I-Pace and Future-Pace, straight from the Jaguar Land Rover Tech Fest in London can be found in our accompanying post here.