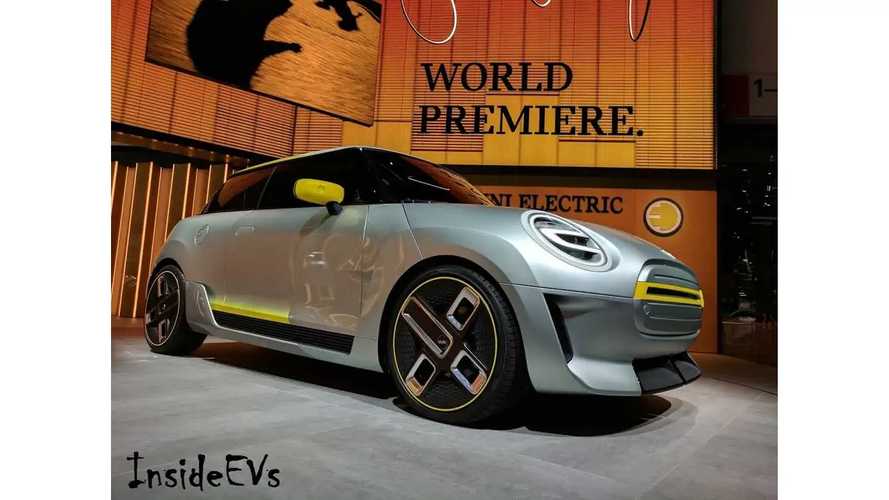 Set for production in 2019, we provide the first live look at the Mini Electric Concept straight from the show floor at the 2017 Frankfurt Motor Show before it opens to the wider press and public.

Mini has yet to provide full technical details on this electric concept car, but we do know the following bit of ever-so important information:

A production version of the MINI ELECTRIC CONCEPT will be unveiled in 2019.

Fans of Mini and electric vehicles,in general, will recall that Mini had a low-volume electric offering nearly ten years ago. It was called the Mini E and had quite the loyal following. This Mini Electric Concept builds upon the foundation laid by that early-day electric car. Even the paint finish of Reflection Silver and Interchange Yellow is reminiscent of the Mini E from 2008.

Bonus below:  Some shots of the wider BMW "plug-in show area" (its huge) in Germany for the 2017 IAA which opens to the press tomorrow

Never fear, Mini fans, the electric concept won't stray from the basics upon which we've come to expect from the brand:

Update: Some more shots live from the IAA floor now the event is open!

We should have more technical details when Mini officially debuts the Electric Concept in the coming days.

For now, feast your eyes on these exclusive first pics.

Full press blast on the new MINI Electric Concept can be found below - but first, an early look at BMW's expansive 2017 IAA show stand for plug-in vehicles!

BMW iPerformance stand at the 2017 IAA

Debut of the MINI ELECTRIC CONCEPT – fully-electric, iconic design and exciting driving dynamics Taut, clean cut surfaces produce a minimalist impression World premiere at IAA Cars 2017, Frankfurt, public display from Saturday 16th September Production version will be unveiled in 2019 Concept follows introduction of the first electrified production MINI, the MINI Countryman Plug-in Hybrid Almost 10 years after MINI E laid the foundations for production-standard battery electric vehicles within the BMW Group, MINI is now offering a window on the future of urban electric mobility. With a focus on driving excitement and inspiring design, it moves the brand’s urban tradition into the electric age and in doing so spices up the conventional notion of electric mobility. A production version of the MINI ELECTRIC CONCEPT will be unveiled in 2019.

MINI Electric Concept From the back the new MINI electric concept is still recognisable as a distinctive MINI design, with a side sporty stance. The top section is dominated by clear surfaces, and takes on a far more dynamic aspect the nearer it gets to the road.