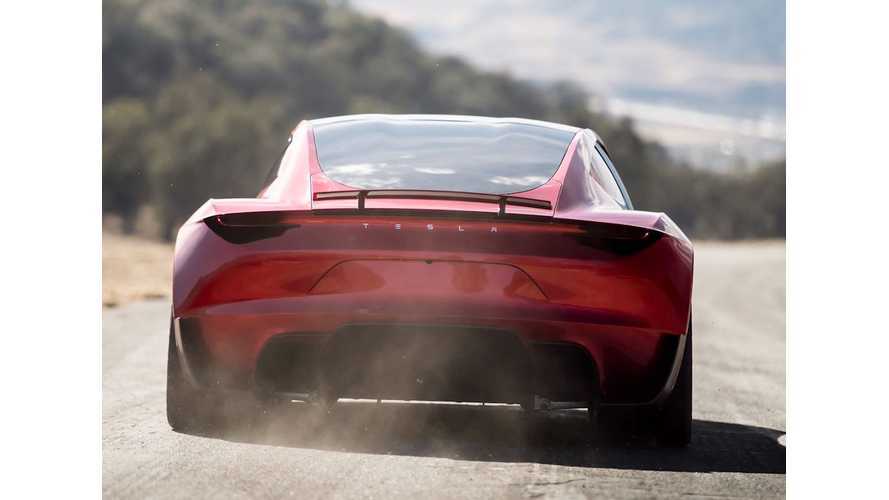 Ben Sullins is working his Teslanomics magic yet again to figure out the true cost of the upcoming, second-generation Tesla Roadster.

The Silicon Valley automaker went from expensive (original Roadster, Model S, Model X), to more expensive with upgrades like the P100D models, to the inexpensive Model 3 (well ... it's surely not cheap, but the point is there). Now, the electric automaker has moved up to a $200,000 second-gen Tesla Roadster, and a $150,000-$180,000 semi, if that even counts.

Elon Musk with the new Tesla Roadster at the electric semi reveal event.

There have already been many stories about what a Model 3 will actually cost. Factor in options, financing, insurance, charging needs (home system and on-road costs), and even aftermarket extras like wraps (for those that want them and can afford it). All-in-all, as stated above, the Model 3 is not a budget vehicle by any standards.

Now, fast-forward to the upcoming Tesla Roadster 2.0. Consider the base price, plus all of the above information, and it's abundantly clear that this will not be a car for the masses. However, it stands to undercut anything even remotely comparable, while at the same time, exceeding all rivals on paper. Sullins does a stellar job of spelling it all out for us, even though his Roadster comes free of charge, compliments of the Tesla referral program.

The Next-Gen Roadster, or Roadster 2020 as people are calling it goes a record-breaking 0-60 in 1.9 seconds. It sports the longest range of any EV at 620mi with a 200kWh battery pack.

Called the Maximum Plaid version of a Tesla, named after Spaceballs, this is the fastest, sexiest production car ever made.

Besides the insane/ludicrous/plaid 0-60 time, Tesla reports the Roadster 2 will go 0-100 in 4.2 seconds and complete the 1/4 mile (or 400m) in 8.8 seconds, nearly a full second quicker than the next fastest, the dodge challenger srt demon which clocks in a lethargic 9.6 seconds

The roadster is officially a four-seater, but the back seat is just big enough for your bags, or skateboard in my case.

This car is aimed at the supercar lovers, the men, and women who want to show off. Barely anything about this car is practical, which Elon put flawlessly when he said

"To put the smackdown on gas cars"

The best feature of the roadster two might be hidden inside. Fitting 200kWh in the cavity of the car, albeit not the smallest, is impressive and makes myself and many others think Tesla made a significant breakthrough in battery technology that we'll later see in the more mass-market models.

The Roadster 2020 comes in two varietals, a base model with a cool price of 200K or the Founder Series edition for 250K.

WE'RE GETTING A FREE ROADSTER!!!!

To reserve your's you'll need to plop down 50K and wait about three years. What's 50K for the worlds fastest production car ever made?

For the Roadster you'll have the same hidden cost you have with any Tesla, installing a charger.

The costs for an in-home charger, assuming you're keeping this car at your house, vary from between 500 dollars and 1,500 depending on your home setup.

Since we're talking about a supercar, I'll add a wrap here to protect the paint which can range from 4,000 to 7,000 on the high end.

Tesla is limiting the founder series at 1,000 units.

So if you're keen on buying the fastest, sexiest, most bad ass car ever made then yeah, buy now.

Otherwise, if you're okay with the base model, still super bad ass, then you probably have some time.

As Elon stated at the unveiling, production begins in 2020. Where will they make it? Who knows, maybe by then they'll have a new factory or perhaps even build it by hand. Chances are though if you have the money for this, you'll be able to get your hands on one in the coming years.

So let's do the cost breakdown and see how much this thing will actually be...