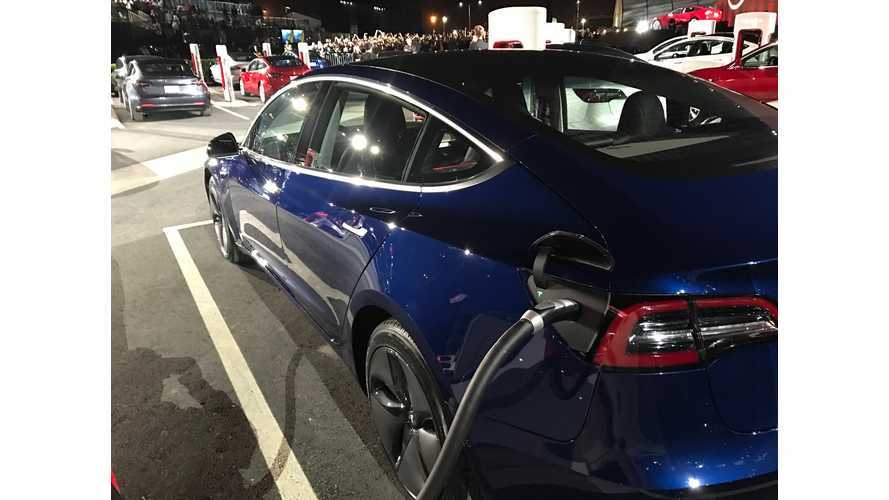 First some background on charging speed.

Charging speed can be stated in different ways:

Tesla's 100D premium offering equal to Model 3 when it comes to charging?

A second way of stating charge speed is power (kw) that the battery can take during charging. More power means more energy (kWh) can be pushed into the battery in a given amount of time. Obviously more power means faster charging when measured in miles per unit time.

Miles per minute charging speed is the product of two variables: charging power times vehicle energy efficiency or miles per kWh. In other words how far will the car go on 1 kWh of energy.

If you want to maximize charging speed you can do it by increasing charging power and/or vehicle efficiency.

Here in lies the secret to why Model 3 can charge as fast as a P100D. It is very energy efficient. It goes much further on 1 kWh of energy than the Model S or X. The new Model 3 with big battery appears to return an MPGe of 126 while my 2012 Model S has an MPGe of only 89 a whopping 41% increase!

But I digress. How do we know that the model 3 charges as fast as the 100D?

First some simple math and a video by Bjorn Nyland of the P100D charging tells us.

Second we have a quote from Tesla’s Q2, 2017 earnings call courtesy Seeking Alpha.

“And what about, just as a follow-up, the charge time? I know Porsche has said that they could charge in 15 minutes. Do you think that's possible in the future? And is the charge time on the 3 the same as the S? I wasn't sure in some of the release.”

“It's about the same. It's comparable to the high-end S. The recharge rate of how many miles per hour you recharge is sort of a function of the battery pack size. So, like a 100 kilowatt-hour pack, because charge rate is a function of percentage of pack – think of 3 and a high end S as being similar in charge rates.”

Add this to the fact that the Tesla Model 3 has nearly the range of the Model S 100D and you have quite an impressive product for less than half the price.