New 2018 Nissan LEAF Comes To Seattle, Goes On US Tour 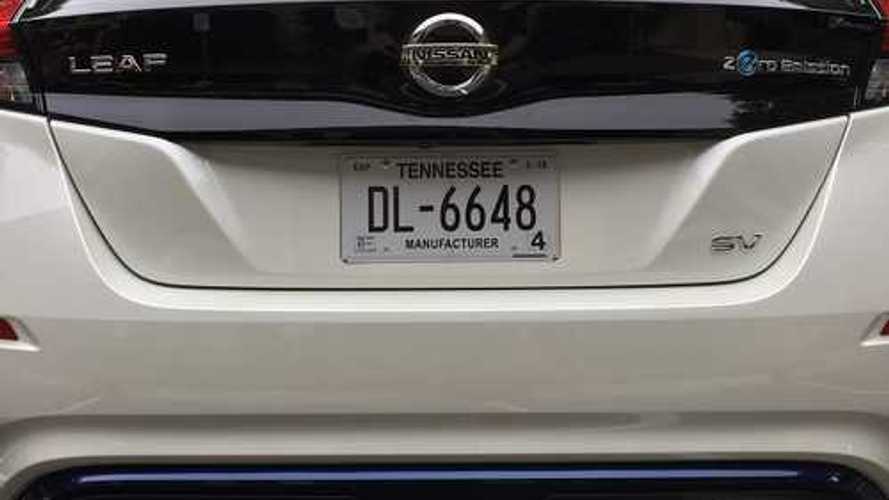 2018 Nissan LEAF arrives in Seattle for people to check out...just days after its global debut

Saturday September 9 was the occasion of two rare events - first of all, it rained in Seattle!  (For all you doubters, it was the first real rain in the great northwest in nearly three months!) Secondly, there was a 2018 Nissan Leaf (details on the 40 kWh/150 mile+ EV) on display for the general public for the first time, all part of the National Drive Electric Week festivities in Seattle's Denny Park.

Traffic around the Nissan display was brisk, as Leaf specialists explained the car's features to interested visitors. The Leaf on display was a white SV model, with the same "floating roof" paint scheme as shown on stage at Nissan's world-wide reveal on September 5th.

I was eager to hear what the onlookers thought of the new car. One EV veteran, Doug Sebastian, was impressed with the car's looks, which he thought appeared better in person than in the pictures and videos he'd already seen. As a current owner of a Tesla Model S 85D, and a 2013 Leaf, Doug knew a lot more than the average visitor. He was particularly curious about the new Pro Pilot Assist, and wondered how long it would be before Nissan would add more intelligent driving features to the model. Doug also thought that the 150 mile range would be a significant enhancement to how the car would perform in the market.

Checking out the 2018 Nissan LEAF

Another area resident, Margie Bone, is an enthusiastic Chevrolet Bolt driver, and nothing she saw in the Leaf changed her mind about her Bolt!  For Margie, the Bolt's 237-mile range make it possible for her to rely on that car for all her local driving needs along with road trips up as far as Bellingham on a regular basis. She did admit that the new Leaf looked great!

A couple of visitors from Germany were very inquisitive as well, and were actively looking for their first EV. The great question of range was foremost on their minds, and on hearing that it had increased to 150 miles on the latest Leaf, that seemed to keep them intrigued.

Reactions to the car's appearance were all quite positive, with a few folks mentioning that it was a huge improvement over the last generation. A young lady who worked at Microsoft was interested enough to put the Leaf on her short list of vehicles to seriously consider.

Nissan employees were registering current Leaf owners for a driving experience once cars are available, and invited them to a launch event to take place on the evening of October 14 in Seattle. They were also giving away future Nissan Leaf collectibles!  This humble scribe took home some cool Leaf swag, along with an item that might come in very handy this coming fall and winter here in the Northwest - a giant Nissan Leaf umbrella!

Editor's Note:  The 2018 Nissan LEAF debuted Friday September 5th in Tokyo and Las Vegas (details/watch here), and Nissan has wasted no time getting the 40 kWh/150 mile EV in front of Americans, as the company has kicked off a live tour during NDEW- check out more dates on the tour here.

Our thanks to Marty for attending the Seattle event and filing this report!