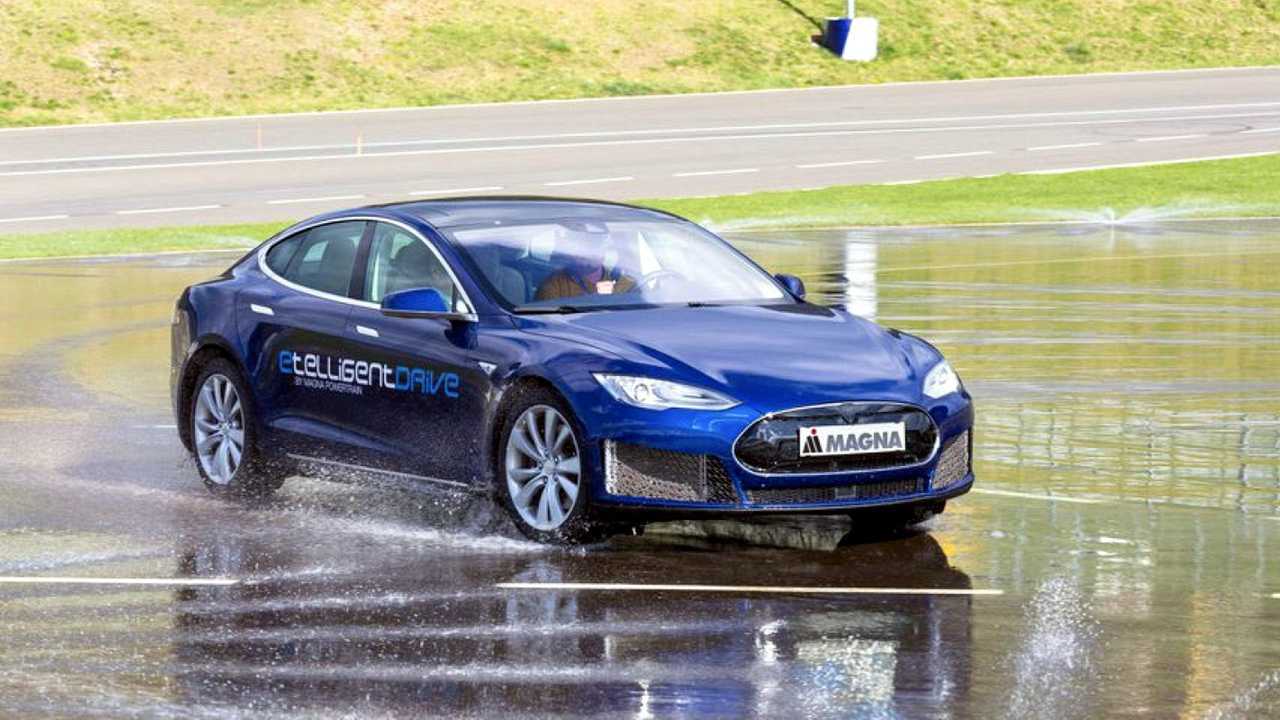 Magna Powertrain put a motor on each rear wheel to make the P100D a better dancer.

First thing’s first – this car isn’t actually a Tesla Model S P100D. It looks like one, and it sounds like one – as in it’s eerily quiet save for the whine of its three electric motors. Three motors? Yes, that’s why this car wears logos from an outfit called Magna Powertrain, a Michigan-based company which removed Tesla’s dual-motor running gear from the Model S and replaced it with an in-house system that features three motors – one for the front wheels and a motor for each wheel in back. It’s now called the Magna E1, and there is a method to the madness.

Aside from a new battery and front motor, Magna’s new powertrain features individual motors for each wheel in back. According to a report from Road Show by CNET, each 140 kilowatt motor produces 188 horsepower for a combined total of 564. For the record, that’s less than a P100D in Ludicrous Mode, but with motors at each rear wheel, Magna’s E1 can torque-vector its way through corners in a manner which the standard Tesla can’t quite match.

So, while we have seen lots of "modified" Teslas in the past (most of which we have not cared for), Magna has actually taken to attempting a performance upgrade, which we can appreciate.

Or rather, that’s what Road Show believes after a test drive of the system at Magna’s facility in Austria. Straight-line acceleration felt on par with a typical P100D, but in the corners the beefy car seemed to respond better, turning in with more gusto thanks to each rear wheel providing varying power levels to help rotate the car. There are no measurements to back up the theory at this point, but the science has certainly been proven on other cars that use a similar torque vectoring setup.

If this has captured your interest, don’t bother pulling out the checkbook to place an order because Magna doesn’t have plans to produce the E1. It’s merely a technology demonstrator at this point, but the company is keen to show off the system. The E1 will be on display next week at the Frankfurt Motor Show, where we suspect many manufacturers will be interested in learning more about the three-motor electric setup.