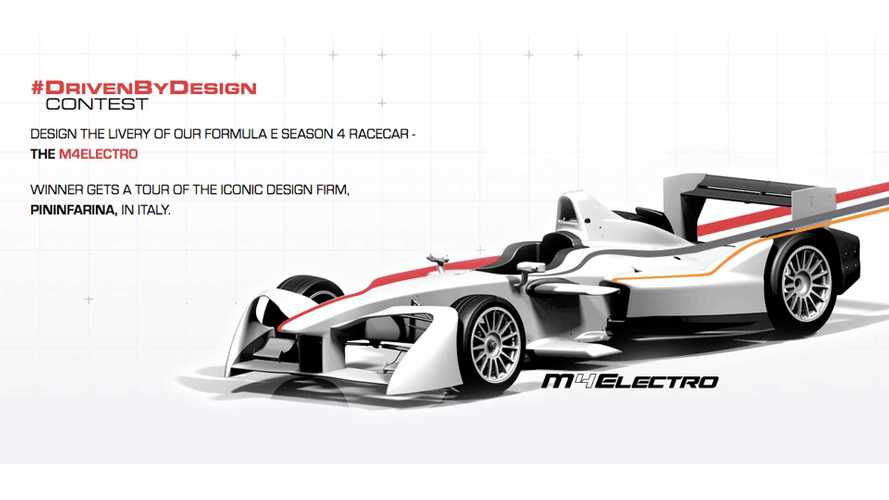 Got your sketch pen ready? Mahindra is looking to outsource the look of its upcoming M4Electro Formula race car that will be used in Season 4, which starts in Hong Kong in December. If you want to help color in the lines of the M4Electro, you have until September 18 to submit your design at the Mahindra website. The winner will not only get to see their car on the course, but will also win a trip to Mahindra's Pininfarina design studio in Turin, Italy.

Mahindra used a fan-made livery for its M3Electro car in the last Formula E season, which ended in Montreal this summer. That "Driven By Design" contest resulted in 281 entries from 41 countries, so expect to have your work cut out for you this time around.

Mahindra Racing Formula E Team Principal Dilbagh Gill said, "The enthusiasm of our Passioneers during previous #DrivenbyDesign contests encouraged us to give them yet another opportunity to showcase their design flair and creativity. The entire Mahindra Racing team can't wait to see what they come up with for the livery our new M4Electro race car."

Mahindra Racing had its best ever season in Formula E during Season 3 placing third in the Team Championship. The M3Electro race car helped drive the team to its maiden race win, ten podiums, three pole positions and two fastest laps. It sported fan-created livery for the entire season designed as part of the inaugural #DrivenByDesign contest.

Following on from the third season's breakthrough performance Mahindra Racing has set high technical and sporting ambitions for the upcoming fourth season of Formula E that begins with a double-header in Hong Kong this December.

To enter the #DrivenByDesign contest, all that any racing fan need do is visit the microsite: drivenbydesign.mahindrafe.com. Once there, you are just three steps away from winning the chance to spend a day with the Chief Designer of the iconic Pininfarina design studio in Turin, Italy, which is part of the Mahindra Group. Just download the kit, design the livery of M4Electro race car and upload it back onto the microsite. It is as easy as one, two and three.

The contest closes September 18, 2017 at 10:00 UTC and is open to racing fans of all ages, from across the world. Entrants can submit as many designs as they want, with the winning design becoming the livery of the M4Electro race car for Season 4.

The previous #DrivenByDesign livery contest in August, 2016 received a very strong response with 281 entries coming in from 41 countries with Spain's Adria Haro Jorba being declared as the winner. Also, Mahindra Racing's Season 3 livery was voted by fans as the winner of the #FELiveryWorldCup in an online poll conducted by Formula E on Twitter.

So, charge up your imaginations and get cracking and you could be on your way to Italy very soon.