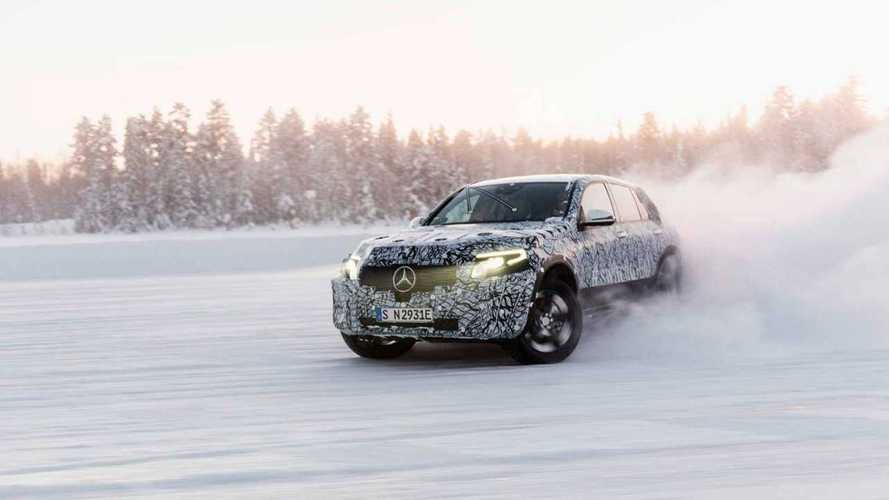 We've seen it before, but these new photos come straight from the automaker.

UPDATE: March 5 - Our spies have sent us a video (directly below) with a prototype undergoing testing in a harsh winter environment.

It’s not every day that automakers send spy photos, so when Mercedes-Benz offered up these shots of the EQC crossover (with no space between the Q and C), we paid attention. That’s doubly so since this will be the first all-electric SUV from Mercedes, and it’s caused something of a buzz in the auto world ever since the EQ concept was revealed. In fact, Mercedes began taking reservations for the EQC last September at $2,500 each, even though a production version hadn’t been revealed and was still a long ways off.

The chunky-looking SUV in full camo is the EQC, and it looks like engineers aren’t holding back in the fun department. If we're honest, independent spy photos have given us a better look. But these shots are certainly a bit more dynamic.

In a press release, Mercedes says prototypes have completed winter testing in northern Sweden – to some disappointment of drivers we suspect given the drift angle in the above photo. The automaker will also be conducting tests in southern Europe and the United States, all of which are part of over 500 individual tests that all new Mercs must endure for validation. Mercedes-Benz EQC Chief Engineer Michael Kelz offered up some insight on the EQC, saying that it offers “a very safe driving feel” and that it’s fun to the point of leaving “a permanent smile on its driver’s face.” We suspect he could be a tad biased, but we keep coming back to that epic powerslide pic. It does indeed look fun.

According to Mercedes, the EQC will have its market launch next year. In the meantime, keep an eye out for more silent prototypes getting crazy sideways.