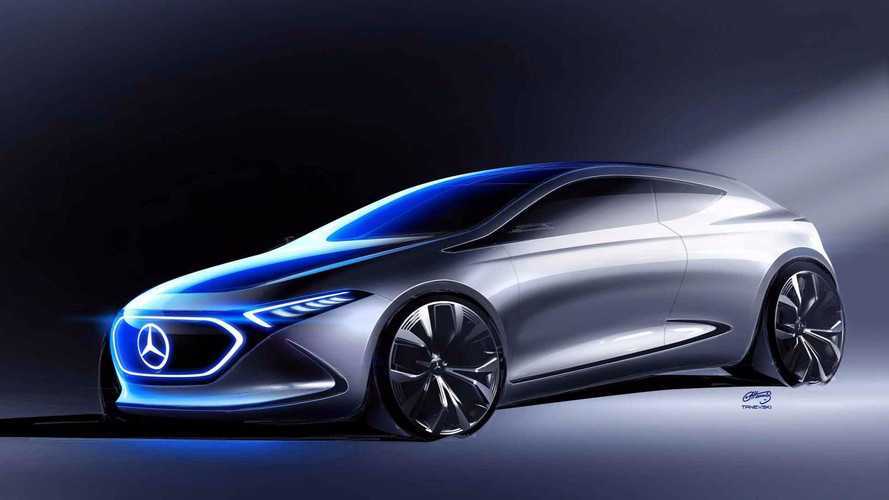 Mercedes-Benz hasn’t been at the forefront of the EV race, but the automaker is planning to have no less than 10 electric offerings by 2025. Among them will be a production version of the Mercedes Concept EQ A, a car that Mercedes has been teasing for some time now and will debut in a few days at the Frankfurt Motor Show.

Whereas the teasers thus far have presumably been close-ups of the actual concept, the latest offering is a full-on design sketch of the car. It reveals a svelte hatchback shape that would be a direct competitor for the BMW i3 and likely put some heat on the Tesla Model 3 as well. The illuminated grille and tri-star badge are clearly represented, though the sketch doesn’t give us any insight to the concept’s rear or interior.

As such, we also still don’t have information on power or range. To compete with the BMW i3, the production version of the EQ A would need a range of at least 110 miles. To take a bite out of Tesla it would need to go much further than that, but it’s believed that the production model won’t be on the street until 2020, so there’s certainly some time for Mercedes to up its game.

The EQ A will be joined at Frankfurt by the larger EQ SUV concept, which in previous form featured a pair of electric motors to generate a combined 402 horsepower with a range of over 300 miles. It’s virtually guaranteed that the hatchback variant won’t pack that kind of firepower, but if Mercedes wants to make a leap forward into the electric market, an EQ A with moderate horsepower and a 200-mile range would be a great start.

Look for full disclosure on the Mercedes Concept EQ A in just a few days at the 2017 Frankfurt Motor Show.

Here are some previous EQ A teasers: