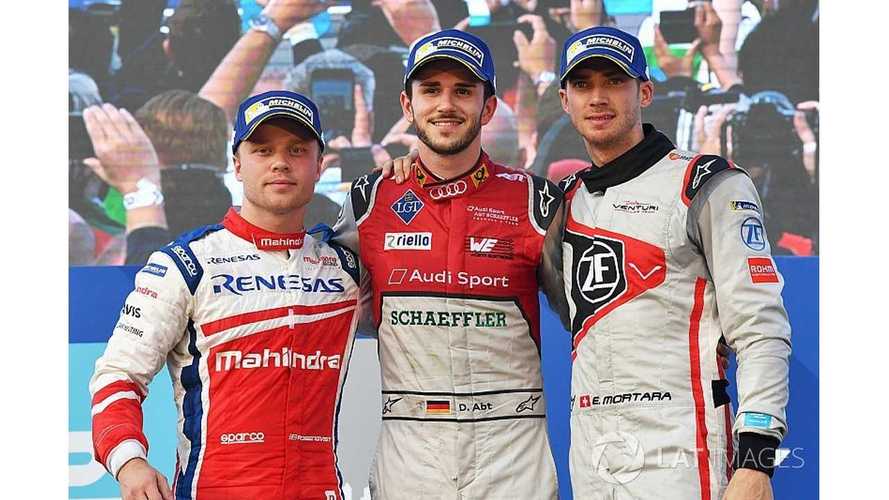 Abt claimed his maiden victory in the series, and Audi Sport Abt’s first as a works FE team, after long-time leader Edoardo Mortara spun late in the race.

However, a post-race inspection revealed that the FIA security stickers on the inverters and motors did not correspond with those declared on the car’s technical passport.

This breaches the series’ technical and sporting regulations, and so Abt has been disqualified from the race result.

Audi had one hour from the time of the decision – 6.55pm local time – to lodge an appeal.

Rosenqvist thus claims his second FE win, completing an unusual race for the Mahindra driver after he spun out of the lead at the first corner at the start and had recovered to second on the road.

Mortara inherits second place, while Mitch Evans is promoted to the podium – Jaguar’s first in FE.

Abt’s victory had launched him to the top of the championship after two races, but his exclusion means Saturday race winner Sam Bird now heads the table on 35 points, two points clear of Jean-Eric Vergne.

The ruling has also gifted 2015/16 champion Sebastien Buemi 10th, meaning he at least has a solitary point to show for a dismal opening weekend.

Audi has also been fined €5000 for a separate infringement: five Audi team members walked onto the track to get to the podium before the final car had entered parc ferme, which the stewards deemed a “serious breach of safety regulations”.

Abt’s penalty is the latest high-profile exclusion for Formula E, and the third time the Abt-run outfit has lost a win due to a post-race investigation.

Lucas di Grassi was stripped of wins in Berlin (in 2014/15) and Mexico City (2015/16), with the latter contributing to his title defeat that season.

Audi has decided to appeal the decision, which means the matter will now go to the FIA's International Tribunal.

Race results below prior to Abt's disqualification: