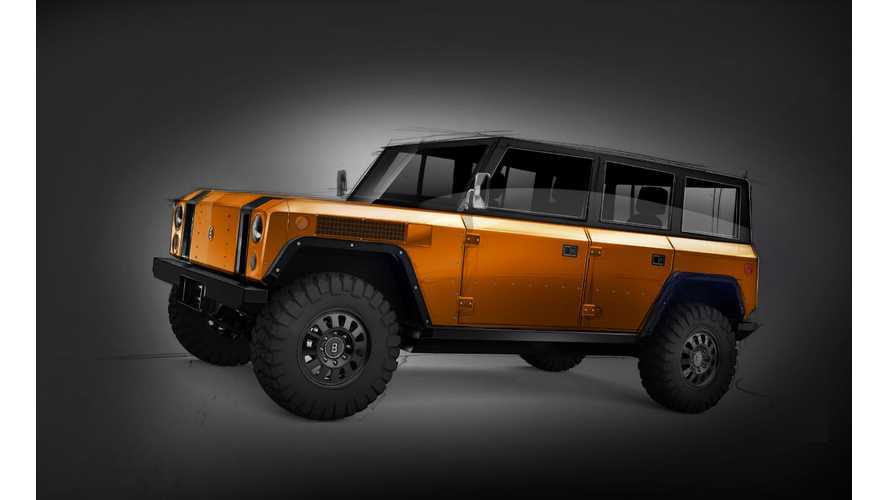 Maybe a bigger Bollinger B1 is better.

It's been little more than a month since startup Bollinger Motors captured the hearts and minds of many with the reveal of its first prototype: the all-electric B1 four-wheel-drive sport utility truck. Already though, plans seem underway for a four-door derivation of the original.

The outfit has just released a sketch from its assistant designer Ross Compton that stretches the chassis by nine inches between the axles and adds a second set of doors. We'll leave it to you to say whether the exercise is aesthetically successful, but it's probably worth noting that the not-completely-dissimilar Jeep Wrangler has done quite well with its quad configuration of passenger portals. And why wouldn't it? While the increased wheelbase might slightly diminish the turning circle and breakover angle, it improves cargo volume by an additional six cubic feet and enhances on-road driving characteristics, not to mention the obvious easing of access for back seat passengers.

According to the New York-based company, other specifications would be unaffected. The ground clearance is still an impressive 15.5 inches; the approach and departure angles stay at 56 and 53 degrees, respectively. Weight will likely increase — the significantly larger 20-inch stretch of the four-door Jeep Wrangler adds 200 pounds to it — and could lightly impact range, as the battery options of either 60 or 100 kWh remains unaffected. Generally, more weight requires more energy.

From the missive sent along with the sketch you see above, we get the strong impression that Bollinger fully intends to build both versions of the B1. And, in fact, it declares that the orange paint that appears in the image will be available when it first leaves the factory doors.

Of course, this effort is just getting started, with the team now immersed in engineering the production model, so it will be some time before a buyer can take delivery (February 2019 was the seemingly optimistic target date mentioned at the reveal). If you're super obsessed with this electric truck and want to get your hands on something similar sooner, we suggest you check out the video below of the 3D-printed 1:10 scale RC put together by Ji-Wook Kim. Looks great riding trails and climbing rocks and, at $180 for the body kit, is a whole lot cheaper than the full size vehicle.