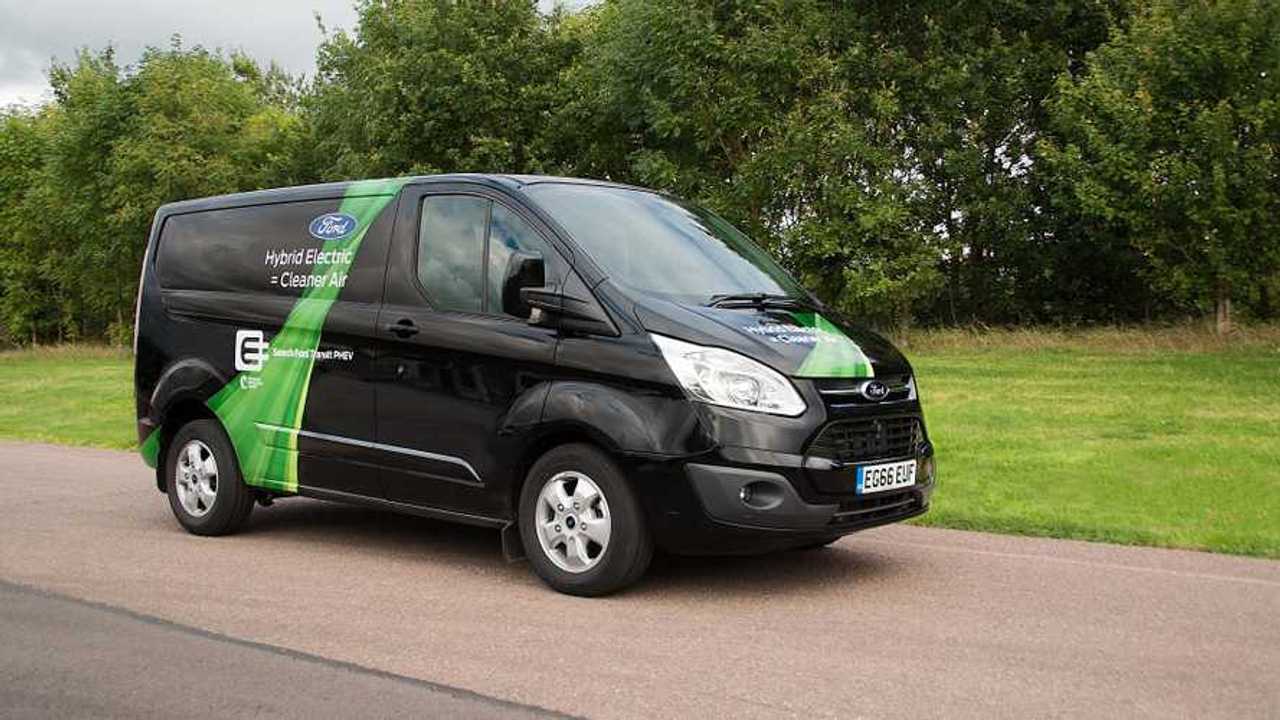 Some 20 of these are just now heading out to be test under a 12-month trial, prior to Ford beginning series production in 2019.

The prototypes are equipped with a EcoBoost 1.0-litre petrol engine as a range extender, and a lithium battery good for "exceeding" 50 km (31 miles) of all-electric range, which should make it an ideal in-town commercial offering - with the ability to still hit the road.

"The vehicle makes its first appearance as Ford prepares 20 PHEV Transits for the 12-month fleet customer trial in London that begins in late 2017, which will explore how the hybrid electric vans can contribute to cleaner air targets and enhanced productivity in city use – the toughest working environment for vehicles.

Scheduled for volume production in 2019 as part of Ford’s global promise to provide customers with affordable and capable electric vehicles, the Transit Custom PHEV has an advanced hybrid system that targets a zero-emission range exceeding 50 kilometres (31 miles), and features the multi-award winning Ford EcoBoost 1.0-litre petrol engine as a range extender. The EcoBoost engine charges the on-board batteries when longer trips are required between charging stops, providing operators with outstanding efficiency and flexibility."

As of press, 13 fleets have been confirmed for participation in the project so far (1 vehicle unless stated otherwise):

“For more than 50 years businesses have relied on Ford Transits to get the job done, and we are determined to maintain that tradition as we move into the electric age. Seeing the PHEV Transits on the road is an exciting milestone, and we look forward to teaming up with our London partners and customers to explore how these vans can reduce emissions and operator costs in the city.”

“Cleaner vans, like those being used in this trial, will be vital in helping the freight and fleet sector to reduce the emissions and play its part in tackling the Capital’s air quality crisis. We are also using the data from the trial, which will be an invaluable resource for our LoCITY programme that encourages commercial businesses to use greener vehicles,”

"The London fleet trial project is supported by Transport for London, and features a cross-section of city-based businesses,* including Metropolitan Police, that will integrate the vans into their day-to-day operations. To help understand how the benefits of electrified vehicles could be maximised, the 20 PHEV Transits will use an advanced telematics system to collect real-time data on the vans’ performance.

In addition, the vehicles will feature geofencing technology, which is capable of automatically modifying vehicle settings based on each van’s current location. This could be used, for example, to ensure the hybrid system is switched to electric-only mode when a vehicle enters a low-emission zone within an inner-city area.

Ford is the first volume manufacturer to offer PHEV technology in this segment of the van market. The technology enables the vehicle to be charged with mains electricity for zero-emission journeys, while the compact and fuel-efficient EcoBoost engine generates additional charge for the batteries when required. The Transit Custom PHEV uses a series-hybrid driveline configuration, with the vehicle’s wheels driven exclusively by an electric motor, rather than by the combustion engine.

The battery pack is a compact liquid-cooled lithium-ion design located under the load floor, preserving the full cargo volume offered by the standard Transit Custom van.

The PHEV approach provides city-based commercial vehicle operators with a range of benefits. In addition to the zero-emission capability exceeding 50 kilometres, the Transit Custom PHEV uses petrol fuel for a target total range of more than 500 kilometres (310 miles) to eliminate range anxiety. The PHEV also has an increased payload capacity compared to battery-only electric vehicles, and the ability to offer quick and easy recharging from a standard electricity supply.

Development of the 20 Transit Custom fleet trial vehicles has been supported by a £4.7 million grant from the U.K. Government-funded Advanced Propulsion Centre. The vans are being designed and engineered at Ford’s Dunton, U.K., technical centre, and at Prodrive Advanced Technology in Banbury, U.K., with programme support from Revolve Technologies.

Ford was Europe’s No.1 selling commercial vehicle brand in 2015 and 2016, and this year has strengthened its position with a 13.3 per cent share in July year-to-date. The Transit Custom PHEV van is part of Ford’s global electrification commitment. The automaker and mobility company has invested $4.5 billion to make electric vehicles that offer customers more capability, productivity and performance. Ford plans to introduce 13 new electrified vehicles globally in the next five years, including an all-electric small SUV to be sold in Europe, North America and Asia.

Ford also recently announced an ambitious China electrification strategy and confirmed that 70 per cent of all Ford vehicles sold in China will have electrified powertrain options by 2025. In August Ford signed a Memorandum of Understanding with nhui Zotye Automobile Co., Ltd., a major manufacturer of zero-emission all-electric vehicles in China, to explore the launch of a new line of all-electric vehicles in the world’s largest auto market.

In addition, Ford is undertaking a joint project with Deutsche Post DHL Group to produce electric delivery vans (e-vans), becoming Europe’s largest manufacturer of medium-sized e-vans with 2,500 vehicles built by the end of 2018. The StreetScooter WORK XL is based on a Ford Transit chassis fitted with a battery-electric drivetrain and a body designed and built to Deutsche Post DHL specifications."