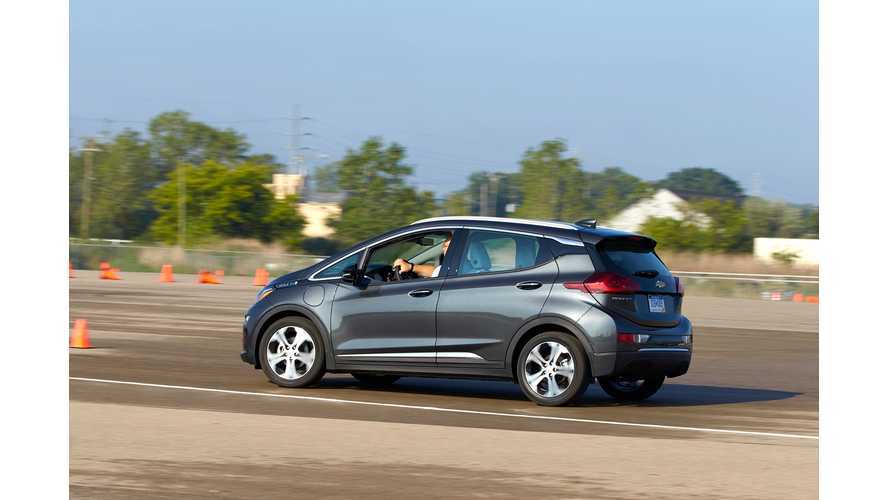 It's still yet to be seen if the Chevrolet Bolt can stand the test of time, appeal to a wider audience, and hit sales targets once the federal tax rebate starts to go away later in 2018, but GM sure knows how to build a car.

General Motors broke records with the launch of the all-electric Chevrolet Bolt EV, as it became the first mass-marketed, long-range (200+ miles real world/EPA), "affordable" EV to hit showrooms.  Not only that, it was on time, and mostly problem-free. The Bolt EV went on to earn a wide variety of reputable awards such as MotorTrend Car of the Year and the North American Car of the Year award (NACOTY).

The Chevy Bolt's motor, drive unit, and battery are produced and supplied by LG Chem, and then shipped to the Orion Township assembly plant.

Though the Bolt isn't selling like its ICE counterparts, it's hitting sales targets - while placing in the "top 5" for plug-in offerings in the US.

Better still, sales are increasing every month, and now that it's available nationwide, this trend should continue. The real question comes down to how long this trend will continue in the future. With cars like the Tesla Model 3 and the all-new 2018 Nissan LEAF making waves, does the Bolt EV have a limited window to make higher highs before settling back?

For now, we can only say that GM has done most everything right with the Bolt, especially in terms of its production at the Orion Assembly Plant in southeastern Michigan, the automaker seems to be spot on. No matter what the Bolt's fate has in store, GM has plans in mind, and its assembly facility is paramount in carrying those plans out.

GM not only builds the Bolt at the Orion location but also its subcompact Sonic (ICE sedan and hatchback models). Compare this to Tesla, a company that only makes EVs and is pursuing a painstakingly slow S-Curve production scheme with the all-new Model 3.  Keep in mind that in a half day, Chevy builds 100 Bolts. Tesla built 30 Model 3s in July and about ~100 in August. It's not a matter of whether or not GM can make enough Bolts, and how quickly, but rather if people actually want to buy them. WardsAuto enjoyed a recent opportunity to spend some time at the Orion facility. The publication shared:

"An early August walk through the plant reveals half of daily output are Bolts (more than 100, a fraction of them being Ampera-e models sold under the Opel brand in European markets). The other half – also more than 100 units – are gasoline-engine-powered subcompact Chevrolet Sonics, both 4-door sedans and 5-door hatchbacks.

Both models move down the line in sequence – first a Bolt, then a Sonic, then another Bolt, and so on – through the course of the plant’s 8-hour shift."

Clearly, as Wards points out, Chevy is able to move through this process seamlessly. The battery pack and the fuel tank are installed at the same station with no bypasses. As the car moves down the line, it's set up to allow for the electric or the gas powertrain to be installed as if they were the same unit. Bolt production-launch manager, Yves Dontigny, shared:

“Just like any other powertrain, the electric-drive unit is installed on the same line as the Sonic’s internal-combustion engine. The challenge was how to package the unit so as not to require a parallel or separate line.”

The line workers demonstrated the process for WardsAuto, showing how they use the same 10 fasteners to attach the battery or gas tank, and the same 12 fasteners to attach either vehicle's driveline. GM has packaged the units in such a way to make this easily possible. The Bolt's high-voltage electric module must be filled with coolant, which is the only operation that is done separately from the Sonic.

There are, of course, sublines to deal with the battery pack, two different gas engines, and certain body panels. However, this is to be expected, since the company is building two drastically different cars in tandem. This is no different than you would expect to find at any factory building two different cars at the same time. Nonetheless, GM manages to carry out even stamping and body operations on the same equipment.

The Orion facility has the potential to nearly triple Bolt production if the need arises (and the powertrain components, including the battery, are available). The automaker told Wards that this could happen without any additional monetary investment. Production could be upped even further if the automaker chose to add a shift. Dontigny said:

“We can add a shift. We can speed up the line. We can slow the line. Everything is based on demand."

With the Sonic on the same line, if demand changes, GM simply re-allocates the factory's production targets to afford more energy to Bolt EV production or vice-versa.

According to WardsAuto, at the end of July:

For now, GM has no plans to change the production schedule or increase Bolt production. There's no point in making more Bolts and less Sonics if demand doesn't necessitate such a change. Dontigny concluded:

“Our next challenge is to increase demand." (for the Bolt, of course)

The nationwide roll-out (to say nothing of the upcoming production of the Opel Ampera-E for Europe in 2018) seems to be making that more and more of a reality these days.