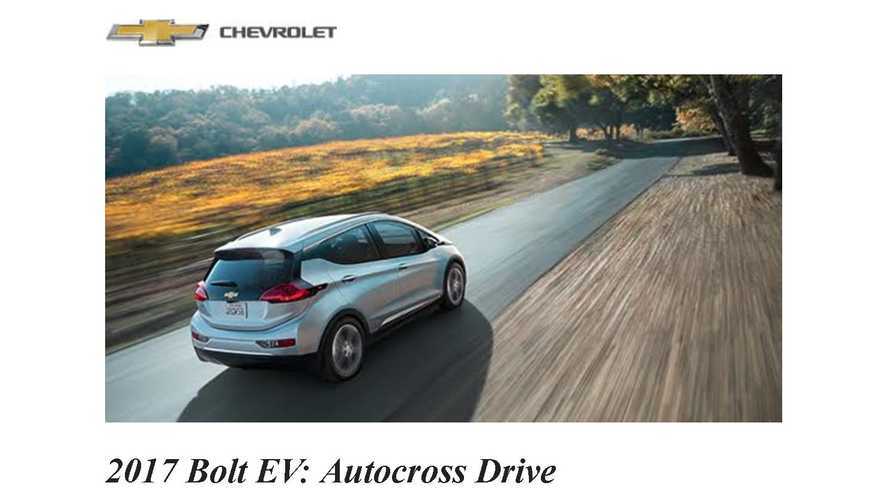 Shrieking tires, burning rubber ... mmm, the sounds and the smells. Thankfully, the only thing missing at GM's official 2017 Chevrolet Bolt Autocross event was the deafening roar of ICE cars and the smell of gasoline.

Rather than spending too much time on the obvious -- the Bolt is long-range, all-electric, mass-marketed, and reasonably priced (especially when factoring in the federal EV rebate) -- GM held this recent event to tout the Bolt's little-known "fun-to-drive" status. It turns out the car can hold its own quite well on an autocross course, even against a Volkswagen GTI.

Video: Check out the automaker's official B-roll footage of the event above.

GM's Official 2017 Chevrolet Bolt: Autocross Drive - This is one of few times we will see what appears to be tailpipe emissions trailing a Bolt. Look at all that torque ... if only we could share the smell with you.

We aren't here to tell you about the Bolt's interior quality, seat comfort, technology, real-world range, predicted reliability, etc. That's all been done before. Instead, we're here to say that GM's engineers and test drivers honestly did a respectable job balancing the Bolt. The fact that GM purposely invited a slew of automotive journalists to experience the Chevrolet Bolt in an autocross environment speaks volumes about how much faith the automaker has in the car's driving dynamics. We all know that the Bolt -- or any EV for the matter -- doesn't need any negative press.

This begs a few questions: How many people will even attempt to autocross the Bolt? (likely few) How many people's daily driving routine requires such agility? (almost none) Nonetheless, it's peace of mind to know that the Chevrolet Bolt lives up to the test, and does it quite convincingly. The car feels remarkably solid, impressively responsive, and most of all, safe.

Chevrolet will soon provide further information on social media channels and perhaps in the form of a press release. Once we have the links, we will update this post. For now, check out GM's official photo gallery below (be sure to click on each image to see the entire photo):
++Share