Chevrolet Bolt vs. Volkswagen GTI: We Take A Spin At GM's Autocross Event 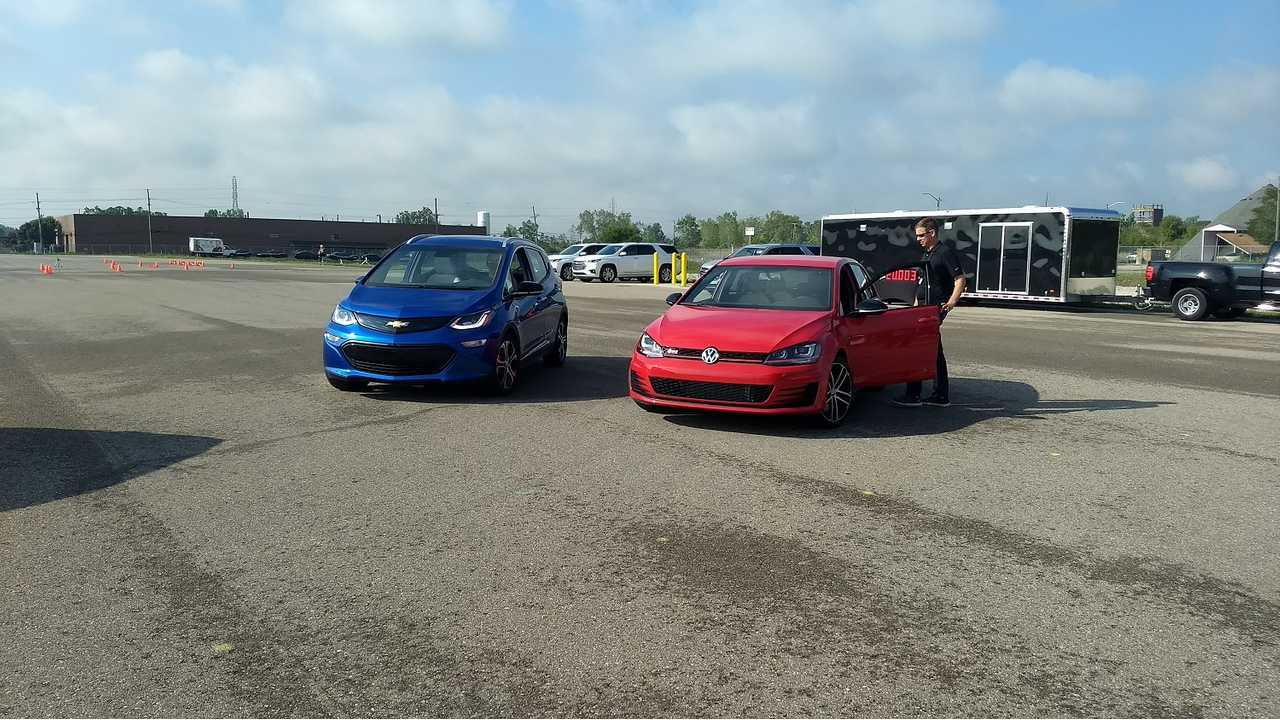 It turns out you really can drive the Chevrolet Bolt like you stole it, and you're not likely to ever roll it.

General Motors held an event last week, which was coined the 2017 Bolt EV: Autocross Drive. Essentially, GM invited a bunch of automotive journalists out to a site near Detroit to experience the "fun-to-drive" aspect of the Bolt. Being that most first-drive reviews err on the side of caution, focusing primarily on typical daily driving, and many people drive reasonably to get the most range from an EV, this was a truly unique way in which to experience Chevy's new long-range, all-electric hatchback.

Chevy Bolt EVs about to autocross!  AKA, we get to drive it like we stole it. Let's so who can roll it first!

InsideEVs attended the third of three three-hour-long sessions. We were a bit skeptical about heading in for the final session due to the potential for the cars to be out of commission or adequately beat, with balding tires and less-than-full batteries. Who knows ... perhaps someone rolled a few of them during day one. However, we were fortunate to have incredible weather and a dry track, and the cars were in tip-top condition. The previous days' afternoon session was canceled due to inclement weather and wet conditions.

We were provided with a number of Chevrolet Bolt Premiers with both summer-only tires (Euro tire/Michelin Primacy 3) and all-seasons (Stock/Michelin Energy Saver A/S Selfseal). Much to our surprise, mere seconds before the drive portion of the event, a Volkswagen GTI Sport showed up. It was equipped with all-season tires (Stock/Pirelli Cinturato P7). All tires on all vehicles were filled to factory recommended PSI.

GM wanted us to have a vehicle on hand to compare to the Bolt. Initially, they'd considered a Nissan LEAF, but that's not really an ideal autocross vehicle (prior to the event, we may have said the same thing about the Bolt). What better than a GTI to provide an example of what a true autocross vehicle should be?

The Chevrolet Bolt churns out 200 horsepower and 266 pound-feet of torque. According to GM, it completes a zero to 60 mph sprint in 6.5 seconds. Comparatively, the Volkswagen GTI Sport cranks out 220 horsepower and 258 pound-feet of torque. The GTI's zero-to-60 time stands at 5.9 seconds. These numbers prove that the two cars are exemplary competitors.

Like anyone might expect from an autocross course, it was pretty tight, combining a number of hard turns, a few switchbacks, and a demanding slalom. We were told that the time to beat from the prior day was "somewhere in the 39s". There were nine of us, many of whom were driving nonstop, plus a few other staffers from GM that were taking some sporadic runs.

GM factory racing and test driver, full-time race car driver for Corvette Racing, and two-time LeMans GTE winner, Tommy Milner, was on hand to help, answer questions, and of course, participate. Also in the mix was Manoli Katakis, editorial director of GM Authority and avid autocross aficionado. Manny has attended multiple performance driving courses and has quite a bit of racing experience under his belt. He even autocrosses his Chevrolet Volt on a regular basis. Needless to say, things got pretty competitive in a friendly sorta way.

For Tommy and Manny, beating the 39s didn't come easy at first, but eventually, they pulled it off. Milner ended the day with a 38.96 in the Bolt (although he may have gone on to beat that time during a video session after our departure), which was narrowly topped by Katakis' 38.78. Regardless, the more important question is: How did the Chevrolet Bolt compare to the Volkswagen GTI?

Unfortunately, Milner didn't post a time in the GTI during our session, but a few other drivers posted times of 38.08 and 37.92. So, the Bolt fared pretty well, though the best time in the GTI was just shy of a second better. Seasoned autocross driver, Manny, performed 7/10 of second better in the GTI than the Bolt. Most would probably never assume that the Bolt could hold its own that well.

In the end, the Chevrolet Bolt handles better than we expected. For a compact car that's not built for applications such as this, it impressed. The Bolt's steering is accurate and the ride is refreshingly stiff. The car's low center of gravity (due to the "skateboard" battery pack) helped tremendously. No one was able to roll the Bolt in any of the sessions, although we're pretty sure that no one was really trying (because that would be a bad idea and we'd like to be invited back, especially if the Tesla Model 3 is next year's comparison vehicle). We will say that even if you tried hard, rolling the Bolt would be an epic feat. We felt safe and secure in the Bolt at all times.

In comparison to the GTI, the Bolt is surely not the better of the two when it comes to autocross, and especially with regards to seasoned drivers (we're not really sure anyone would expect it to be). With that being said, Chevy's long-range EV provided a pleasant surprise. Though the GTI was more nimble, the Bolt just about made up for it with its instant torque, low center of gravity, and ease of use.

Moreover, the Bolt, like any EV, provides consistent results to the average driver every single time.  Just push down the gas and go. With the GTI, or any ICE vehicle, there's so much more involved. Consistency is difficult when dealing with launching the ICE vehicle, and if it has a manual transmission, the ante is upped substantially. It's not unlike InsideEVs' take on the Tesla Model S P100DL vs. the Dodge Challenger SRT Demon. You have to know the car well, rev the engine just right, release the brake in a timely fashion, etc. There's nothing intuitive or easy for the average "Joe" when it comes to checking all the right boxes to get an ICE car to consistently tackle the race track. With an EV, just about anyone can succeed with just a bit of practice.

If you ever plan to autocross a Chevrolet Bolt, here's what we learned:

Use DRIVE mode, which applies the least amount of regenerative braking. Engage SPORT Mode to provide a truer (and less efficient) throttle response. Opt for the summer tires and make sure that TRACTION CONTROL is on. All the best times were achieved with the Michelin Primacy 3s, DRIVE, SPORT, and TRACTION CONTROL. Of course, we raced with the HVAC system OFF. It's an EV, just set it and forget it.

Surprisingly, after three hours of really hard driving, and several hundred laps, though the tires had no shoulders left, and some of us were feeling pretty torn up, the Chevy Bolt EVs had a significant amount of range to spare.

Just for fun, does the Chevrolet Bolt or the Volkswagen GTI win in a traditional drag race? Let's have a look:

Check out some photos of the event below (be sure to click on each image to see the entire photo):