President Of Belarus Drives A Tesla Model S, Urges Local Automakers To Be Like Tesla 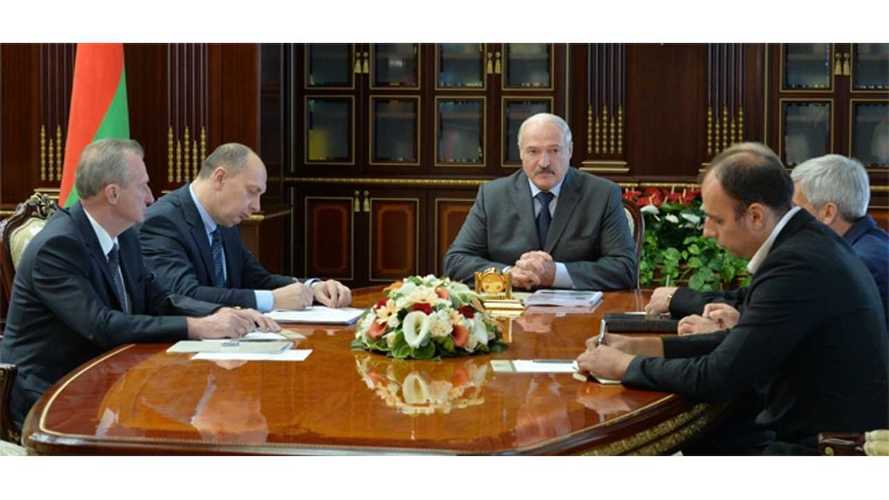 Belarus President Alexander Lukashenko revealed that automobiles have been his hobby for a long time, and as one might expect, he hopes Belarus will develop EVs.

Lukashenko recently tested the Tesla Model S (video above - fair note:  one might need to speak Belarusian...or at least Russian to understand it) and instructed Belarus developers of electric vehicles (of which there must be some it seems?) to strive for Tesla’s standards, as it's a very good car.

Lukashenko sees that electrification is coming, and he would like to make better use of the nuclear power plant that is coming to Belarus (currently under construction).

“The world is moving in this direction. Americans have created a super car. Well done! Tesla Company has created an excellent car,” noted the President.

"It accelerates so fast as to leave all the German combustion engine cars we’ve tested way behind. They couldn’t catch up. The Tesla car goes off like a space rocket and even harder. 100kmph within 2.5 seconds. I was curious about traction. It turns out its traction is ideal."

To date, Belarus hasn't engaged with production of EVs to any degree as far as we can tell.  There are some national projects surrounding the conversion of a "Geely stock car".

At this point, Belerus realizes the most reasonable path to get on board with the plug is cooperation/establishing a JV with the Chinese, or another established manufacturer, to spark some volume projects, as the tech is evolving at an incredible pace.

“...We have to switch to electricity. We are already falling behind. Get everyone involved and start working. Tell me if things don’t work out,” concluded the Belarusian leader.

For some quite blunt talk from the Belarus President on the subject, check out the press release from his recent discussion on EV development.

On 31 August Belarus President Alexander Lukashenko held a government conference to discuss the development of the Belarusian automobile engineering industry. Aide to the Belarus President Alexander Kosinets, Industry Minister Vitaly Vovk, Chairman of the Presidium of the National Academy of Sciences of Belarus Vladimir Gusakov, and developers of Belarusian electric cars took part in the conference.

Alexander Lukashenko stressed that the entire world is busy developing and adopting electric cars, including the UK, Germany, and the USA. “The world is moving in this direction. Americans have created a super car. Well done! Tesla Company has created an excellent car,” noted the President.

The Belarusian head of state was able to test-drive a Tesla car and spoke in glowing terms about its technical parameters and dynamics. “It accelerates so fast as to leave all the German combustion engine cars we’ve tested way behind. They couldn’t catch up. The Tesla car goes off like a space rocket and even harder. 100kmph within 2.5 seconds. I was curious about traction. It turns out its traction is ideal,” noted Alexander Lukashenko.

According to the President, Belarusian developers should use this vehicle as a standard they should aspire for. Alexander Lukashenko also noted that he had been made intimately familiar with the recently revealed Belarusian electric car based on a Geely stock car. “I’ve looked at every detail. I don’t know about the standards of the motor you’ve created, the drivetrain and so on but it looks decent from the outside,” said the head of state. Yet he underlined that a lot of technical work has yet to be done to reach Tesla’s standards.

“Yet your promises inspire me on one hand and disturb me on the other hand. If we can create the world’s best battery to accumulate electricity, why don’t we do it? What do we lack to make it happen? People, money, competences? It must be done right now,” stated Alexander Lukashenko.

The President also gave several practical recommendations after getting familiar with the Tesla electric car. “Battery is a core component. There is no need to put it in the trunk. As you can see, Tesla’s battery is located at the bottom of the car. As far as I can see, it keeps the vehicle balanced even at a high speed. This is why we should adopt the same approach,” concluded the head of state. “Creating a good motor is the key thing. You have the base for it. My demonstration of this car to you is the purpose of today’s conversation. Study it. It is as good as it gets.”

“It is the future. We should not fall behind. We should not lag behind with our competences and scientific standards,” stressed the Belarusian leader. “In the near future nobody will want to buy combustion engine vehicles like hot cakes the way it was in the past. Compare this car to what we have created and aspire for these standards.”

Alexander Lukashenko noted that he keeps an eye on the latest products of the global automobile engineering industry, including electric vehicles. “It is not the first time I’ve got my hands on such cars. I know that Mitsubishi created one of its own in the past. Possibly a bit worse. Then BMW created a smaller car, which was maneuverable, good, and fast. And here is the third car I’ve been able to test. To tell you my personal secret, automobiles have been my hobby for a long time, I keep an eye on the progress of this industry,” admitted the President.

In his words, Geely cars with internal combustion engines are only the first stage. “We need electric cars. Maybe from the same factory or another one. It is up to you who you will work with to create this car — Americans, Germans, or the British,” said the head of state.

Alexander Lukashenko also pointed out that the development of electric automobiles proceeds along with the construction of a nuclear power plant in Belarus. The power plant will be able to substitute considerable volumes of imported natural gas and create a sizeable surplus of electric energy. “Fortunately, we are part of the trend. Nowadays the global trends are clean technologies, clean vehicles, clean trains, and replacing hydrocarbons with clean fuel. Electricity is one of the clean fuels,” pointed out the President.

All participants of the meeting had a chance to get familiar with the Tesla car the head of state tested on the Palace of Independence grounds and evaluate the vehicle’s performance.

During the meeting Alexander Lukashenko drew attention to the need to also develop other kinds of electric transport, including bicycles, motorcycles, and scooters. “We have an enterprise for it already. You can already do it. It should get going as soon as possible. One type for the countryside, another type for the city. We will think about ways to support your manufacturing later on in order to make the products affordable for the people. We have to switch to electricity. We are already falling behind. Get everyone involved and start working. Tell me if things don’t work out,” concluded the Belarusian leader.